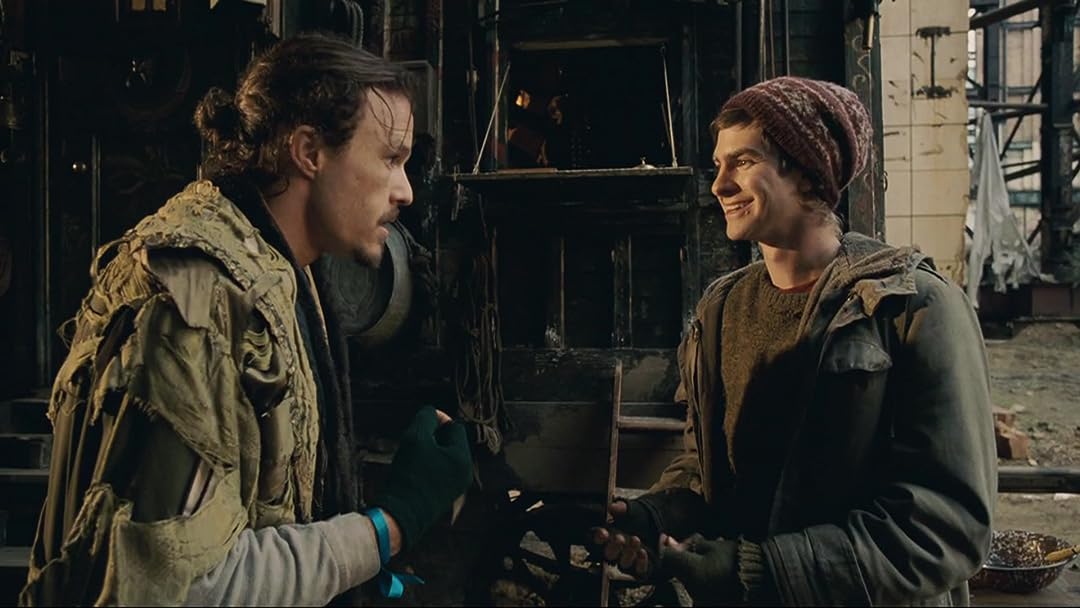 The Imaginarium Of Doctor Parnassus

(2,697)
6.82 h 2 min2010X-Ray13+
A fantastical morality tale, set in the present-day. It tells the story of Dr. Parnassus and his extraordinary ‘Imaginarium', a traveling show where members of the audience get an irresistible opportunity to choose between light and joy or darkness and gloom.

J&JReviewed in the United States on January 5, 2017
5.0 out of 5 stars
Surprisingly good.
Verified purchase
This is not a movie for thinking, it's a story designed to take you down the rabbit hole.
I thought this may have been a bit over the top but was in the mood, after a really long day that lasted a week, for a little escape.
I did watch the Art of The Imaginarium of Doctor Parnassus first. It was free when I saw it.
Great way to preview without trailer highlights & get a feel.

I forgot, how great Heath Ledger is. One of those Kevin Spacey actors that just gets lost in his craft & takes you with him.
I don't normally synopses bc I feel you should discover a story on your own but it's kind of necessary here.
Dr Parnassus has the ability to pull people into his mind to achieve their fantasies.
So take that concept & add the over the top Monty Python Sir Terry Gilliam, & Heath is just perfect in this beautiful fantasy.

It's very hard to keep a story on point while being pulled into a fantastical, theatrical, mind altering world.
Somehow, that's exactly what was satisfied here.

I'm so glad I bought this not just rented.
It has that Alice inWonderland quality, I love visiting over again.

Anonymous UserReviewed in the United States on September 4, 2017
5.0 out of 5 stars
I CAN'T STOP WATCHING IT! DEFINITELY ONE OF THE BEST FILMS I'VE EVER SEEN, AN INSTANT CLASSIC AND FAVORITE!! I HIGHLY RECOMMEND!
Verified purchase
This has instantly become a favorite movie of mine! I rented it and now I'm definitely going to buy it! I'm a big fan of Alice In Wonderland movies and this movie is definitely along those lines in taking you down the rabbit hole and into another wonderland world... it's honestly one of the best movies I've ever watched... and you can't beat the all star cast! Heath Ledger's last performance was definitely one to remember... and everyone should see this film... and Johnny Depp, Jude Law, & Colin Farrell all do an amazing job at playing his role as well and filling in his part... the whole cast is amazing! Andrew Garfield did amazing too... and Christopher Plummer and Tom Waits are also awesome in their roles... and not to leave out Lily Cole and Verne Troyer who were also awesome in their roles... like I said the whole cast was stellar!! I definitely highly recommend this movie...
10 people found this helpful

Michael D.Reviewed in the United States on April 26, 2020
1.0 out of 5 stars
Suspension of reality is one thing but...
Verified purchase
This man has lived for thousands of years coaxing people to walk through his mirror. Some come out having a once in a lifetime magical experience and others explode and are never seen again yet somehow this guy isn't famous either for miracles or as a mass murderer. There is some kind of bet with the devil that's never fully explained, he's on the verge of losing his daughter to the devil but gets drunk instead of doing anything about it. It had a great cast, great acting, it was nice to look at. I watched it to the end but it was one of the most ridicules story's I've ever seen.
5 people found this helpful

brian kellyReviewed in the United States on December 24, 2017
5.0 out of 5 stars
Great trippy movie, Heath Leger's final movie
Verified purchase
Good trippy movie, labyrinth meets fear in loathing in las vegas with out drugs? throw in a bit of a carnival gypsy vibe, heath ledger, johny deep and Gandolf and well you get the idea. I had to watch this more than once to fully understand it. The first time I saw this I was like I need LSD! but now that I have seen it like 7 times I'm like o this is a healthy alternative to LSD lol. That's what this movie is, its like being on a trip sober. Its also the last movie Heath Ledger ever did, in some scenes you can kinda still see the joker in him. After he died they had to change this movie using other actors like Johnny Deep, Jude Law and Colin Feral to finish his scenes which might seem odd but makes the movie better in a way. When he's in London hes Heath, when he's in the imganinarium he's the other actors so it fits better than if he played the whole thing him self I think.
9 people found this helpful

Most people know that this was Heath Ledger's last role and that he died during the filming process, but what surprised me was how much he is actually in the movie.
I would say around 50% of it.
His performance is really good here as expected. He showed us that we were looking at a guy who had just begun to scratch the surface of his talent.

Christopher Plummer (Doctor Parnassus) and Tom Waits (Satan) both turn in equally excellent acting showcases. Even newcomer Lily Cole does a good job. Verne "Mini-Me" Troyer Johnny Depp, Jude Law and Colin Farrell fill in the gaps that Ledger could obviously not. Depp gets the least amount of time, but all three bring the right amount skill to each "tribute" version of Ledger's character. Since Ledger was able to film all the reality parts before his death, his ever changing look could easily be explained in the fantasy realm.

I think most who give it a shot will find themselves lost in the the mind of one Dr Parnassus and love it. :-)

The Imaginarium of Doctor Parnassus is first and foremost a Terry Gilliam film, which could make or break the overall experience for you. Gilliam has a very specific style that is best described as an LSD trip with a more cohesive story. His films are usually incredibly visual, are wrapped around a unique story, and above all else spectacularly weird. The one thing his films can always guarantee though is originality. Doctor Parnassus is very similar to Gilliam's The Brother's Grimm, which also starred Heath Ledger. At least as far as visuals go. So if you're not a fan of other Gilliam films like Time Bandits, Baron Manchausen, Twelve Monkeys, Fear and Loathing in Las Vegas, The Brothers Grimm, or Tideland among others, then it's safe to say you probably won't enjoy this film.

The other piece of information that's worth knowing going into this is to not expect much Heath Ledger. Johnny Depp, Jude Law, and Colin Farrell were brought in for a reason. You're left wanting more, which is probably a good thing. It's not a stab at Depp, Law, or Ferrell as they all portrayed Tony pretty flawlessly. Ledger is around long enough to show potential. He has a few standout scenes and a great speech or two. Then he's gone. Out of the three actors that also played Tony, Depp did the best job. When you first see Johnny Depp as Tony, he still looks like Heath Ledger. His actions, his body language, his dialogue, it all feels like the same character. Without giving too much away, it feels as if Tony changed every time he stepped through the mirror. Well, that's not entirely true. It's more like Tony's true nature was revealed more and more with each transformation.
6 people found this helpful

xiwaeoReviewed in the United States on December 24, 2018
5.0 out of 5 stars
Doctor Parnassus is Entertaining.
Verified purchase
I enjoyed this movie. Somehow I overlooked this movie years ago when it first came out. If you have never seen this movie before, by all means make the purchase. The story line deals with an old man who makes a deal with the devil( in exchange for his soul he lives a very long life) when it time to repay the devil the old man tries to outsmart him. Some of the actors are Heath Ledger, and Johnny Depp, Jude Law, Lily Cole and Christopher Plummer. I suppose you could let a young child watch this , there are a couple of moderate sexual scenes but nothing too explicit. The movie lasts about two hours. I enjoyed this movie there were plenty of special effects and fantasy scenes, and there was intrigue as well as humor.
One person found this helpful

N. DoyleReviewed in the United States on June 17, 2010
4.0 out of 5 stars
Imaginative and bizarre but absolutely fascinating...
Verified purchase
HEATH LEDGER's sudden demise during filming of THE IMAGINARIUM OF DR. PARNASSUS made it necessary to change the script so that his unfinished scenes could be played by other actors within the realm of the crazy world of the Imaginarium. This clever adjustment to the script provides three other actors with fill-in roles for Ledger: JOHNNY DEPP, JUDE LAW and COLIN FARRELL.

Heath is a complete delight in his role as the mysterious stranger who comes upon the traveling sideshow and has the power to change everything. CHRISTOPHER PLUMMER is a marvel in the title role as the 1,000 year-old man who has sold his soul to the Devil and must turn over his daughter to Mr. Nick (TOM WAITS) on the occasion of her sixteenth birthday. Newcomers ANDREW GARFIELD and LILY COLE are well cast as performers in the troupe.

All of it is filled with wondrous sets, gorgeous costumes, and an abundant sense of good humor. Everyone in the cast seems to be having fun with their roles, particularly Heath Ledger. I dare say that if he had lived to complete his role, it may well have garnered another nomination for him.

Terry Gilliam has directed with a firm grasp of tongue-in-cheek fantasy and made a vastly entertaining film out out of a slim storyline. Whether you respond to it or not will depend entirely on your taste. It's totally bizarre but fascinating.

Roy ClarkReviewed in the United States on June 14, 2010
4.0 out of 5 stars
A SMORGASBORD OF +/- ELEMENTS, IT MOSTLY WORKS
Verified purchase
Terry Gilliam is deemed a love-him or hate-him director. For me, I take his films piece-meal. Some parts are great, some oh-hum and some true flops. At his best, Gilliam is far-better than most directors. At his worst, his scripts are frustratingly illogical, distasteful and/or boring. I buy whatever he does though, knowing that all are sucha mix of sublime and crapolla.[[ASIN:B000KB4898 Tideland (Two-Disc Collector's Edition)]] - TIDELAND is the best and worst of the spotty Gilliam genre`.

The overall feeling of this flighty flick The Imaginarium is 'spotty'. Some things work, others don't. There are smiles and grimaces, intrigue and boredom. And so on, throughout. Of all filmmakers, for me, Gilliam is the most artful, daring and independent. Not only are his films different from most all others, but from each other. Gilliam takes chances. That's what true auteurs do, a testament to their love of their art.

Here, my Gilliam favorites: [[ASIN:0780022181 Brazil - Criterion Collection]], [[ASIN:B0026FCNK2 12 Monkeys [Blu-ray]]], [[ASIN:0783229526 Fear and Loathing in Las Vegas]]. There are many more; most mixed bags. All worthy of a look-see; chances are, the more you view each, the more you'll like it.
See all reviews
Back to top
Get to Know Us
Make Money with Us
Amazon Payment Products
Let Us Help You
EnglishChoose a language for shopping. United StatesChoose a country/region for shopping.
© 1996-2022, Amazon.com, Inc. or its affiliates