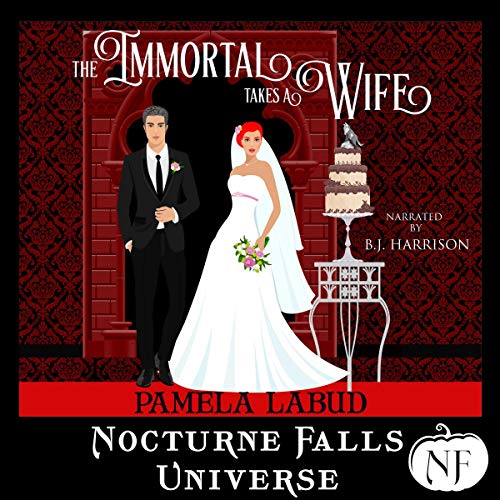 The Immortal Takes a Wife: A Nocturne Falls Universe Story

4.3 out of 5 stars
4.3 out of 5
69 global ratings
How are ratings calculated?
To calculate the overall star rating and percentage breakdown by star, we don’t use a simple average. Instead, our system considers things like how recent a review is and if the reviewer bought the item on Amazon. It also analyzes reviews to verify trustworthiness.
Top reviews

susan/vt
2.0 out of 5 stars Typos, confusing setting and poor character development
Reviewed in the United States on August 1, 2018
Verified Purchase
Sorry, but this isn’t a Noctune Falls Universe story. The author mentions NF and some action does occur there but mostly you are not sure where you are. The Underworld? Is it a bar or is it another dimension? I’m not sure. I would come to line and it seemed like something was missing, did I skip a page? Nope, it was just a leap I was supposed to make. It never was clear to me. And the typos! I don’t think of them as typos. They are just plain old mistakes and a total lack of proofreading. You’re instead of your. Half instead of have. This book was a total disappointment and I haven’t even mentioned the characters in the story. Save your money and skip this one.
Read more
3 people found this helpful
Helpful
Report abuse

Detra Fitch
3.0 out of 5 stars 3.5 stars. So much is going on!
Reviewed in the United States on May 24, 2020
Verified Purchase
Werewolf Fiona O'Malley and Immortal Matthew "Matty" Hyland have dated off-and-on for a long time. Fiona is finally getting fed up with Matty's irresponsibility and untrustworthiness. Perhaps it was time to cut her losses.

Matty and his twin brother, Max, are connected. If one dies, so does the other. Matty has always caused trouble and expected Max to bail him out. However, this time Max may be unable to do so.

Ryan Hawke is a former police detective. Now a freelance bounty hunter, he is after Matty. Ryan feels bad for Matty and Fiona's relationship, but he has a job to do - one he cannot ignore for personal reasons.

**** THREE & A HALF STARS! So much is going on in this tale that my synopsis hardly skims it. It was nice to see Max and his Reaper wife, Holly, again. (Look up their story, "Reaping the Immortal".) All through this story various characters, including Matty, say that Fiona is too good for Matty. I totally agree. However, for once, such a horrible boyfriend manages to change. There are many characters in this novel, yet most of them have well developed backgrounds. This is the second title that I have read by Pamela Labud and she is definitely worth keeping an eye on. ****

Deba
3.0 out of 5 stars Poorly Edited, Confusing at times
Reviewed in the United States on February 1, 2019
Verified Purchase
I gave this a 3 because it is an interesting story concept. BUT it is not the usual NFU type story. And maybe 2.5 stars is closer to reality.There is absolutely nothing about Nocturne Falls save the occasional name of a business. And Underworld City is not well explained except as another plane of existence ---- but you can drive a car there and sometimes it is .minutes and other times hours. Moves slower than necessary with a lot of internal reflection especially from Fiona justifying her love of someone who has not treated her well. Everyone has noted the typos which are serious enough to alter the meaning of a sentence. Matty needs to get out of a contract with Druids. Fiona needs to set ground rules. Max needs to get a sense of humor and Holly is a great Reaper. Hawks was not well developed which is a shame because he had the potential to be the .most interesting character in the story.There
Read more
Helpful
Report abuse

Kindle Customer
3.0 out of 5 stars Nocturne Falls
Reviewed in the United States on April 9, 2021
Verified Purchase
I very much enjoyed the story and the people. I would have loved it if a proofreader had eliminated 1/2 of the unnecessary commas, included all of the missing words, and corrected the malapropisms.
Read more
One person found this helpful
Helpful
Report abuse

JVP
2.0 out of 5 stars Disappointing due to so many typos and editorial issues...
Reviewed in the United States on July 31, 2018
Verified Purchase
I was disappointed with this book, especially since the previous related book was very good. I didn't think this was up to the standards I've come to expect from the Nocturne Falls Universe stories. There were multiple typos on almost EVERY page, and not just spelling errors. There were sentence fragments and grammatical issues too. It almost seemed like the book posted was a first draft prior to editing and proofreading. The overall story was fine, but I can't give this a higher review due to the editorial errors that interfered with my enjoyment of the book.
Read more
One person found this helpful
Helpful
Report abuse

GVKW
4.0 out of 5 stars Cute and relatable storylines, but...
Reviewed in the United States on October 23, 2018
Verified Purchase
SO many grammatical errors! There is nothing worse that staggering over bad writing forms in the middle of a good story! Your/you're, hear/here, dropped verbs... *SIGH*

Please hire an actual proofreader before publishing, and if you did that this time around, you're entitled to a full refund!! Five stars if fixed!!
Read more
Helpful
Report abuse

Barbara Nunez
4.0 out of 5 stars Another great Nocturne Falls story
Reviewed in the United States on February 22, 2019
Verified Purchase
I love the stories about people in Nocturne Falls. Some of them are written by different people but they all follow the same idea and tie together at some points by mentioning some one who is in one or more of the other books.
Read more
Helpful
Report abuse

Ms Tracey
5.0 out of 5 stars Nocturne Falls, another great story
Reviewed in the United States on September 29, 2018
Verified Purchase
If you have not read any of the other stories, do not let this be your last. What a great series. You will fall in love with the characters and the town.
I have read about 10 books and I love them all and cannot wait to start the next book!
Read more
Helpful
Report abuse
See all reviews

M. Kaye
3.0 out of 5 stars What happened to the spell-check?
Reviewed in the United Kingdom on July 31, 2018
Verified Purchase
I'm a big fan of Nocturne Falls and the Universe series and I eagerly pre-order all the books as they become available.

This book felt slow and quite repetitive with the feelings of the two lead characters. That being said, the story line isn't bad, and I did finish reading it, through to quite quick ending.

It would have been a slightly higher rating, but the number of spelling mistakes, wrong words and other issues definitely brought the score down.
To me it seems that this hasn't been spell checked (even with a built-in spell check) let alone proofread - very poor in this day. How could "thier" be missed more than once!
Read more
Report abuse
See all reviews
Back to top
Get to Know Us
Make Money with Us
Amazon Payment Products
Let Us Help You
EnglishChoose a language for shopping. United StatesChoose a country/region for shopping.
© 1996-2021, Amazon.com, Inc. or its affiliates