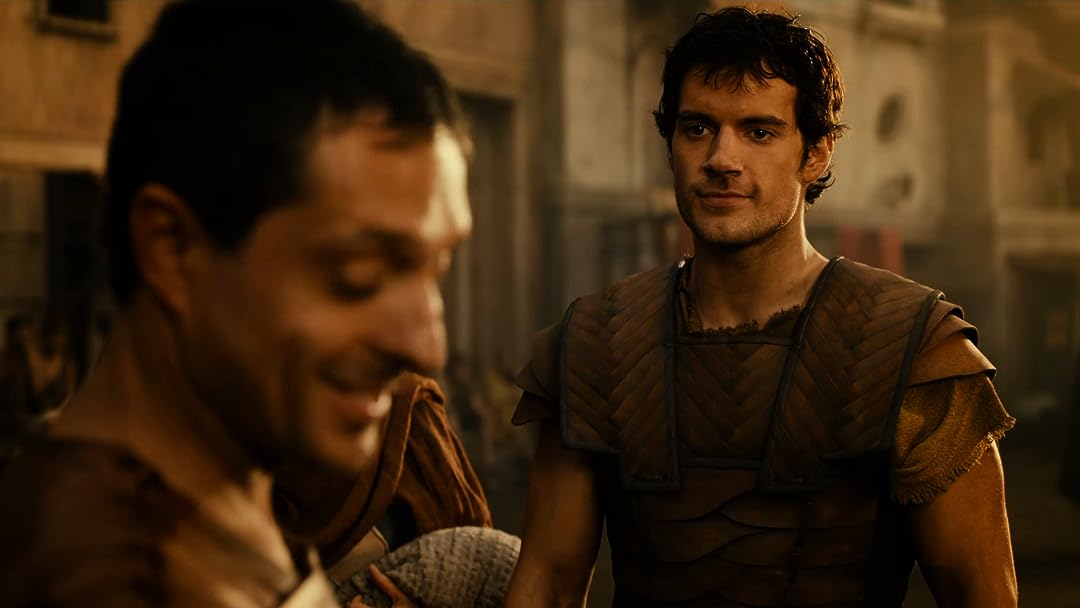 (9,862)
6.01 h 50 min2011X-RayR
Before the dawn of time, there was the Dawn of War. In a world where gods, titans, and mortals battle for supremacy over the earth, a young warrior, Theseus, embarks on a quest to defeat the rising forces of evil which threaten the fate of all mankind.

Bare BonesReviewed in the United States on July 22, 2019
4.0 out of 5 stars
THE BARE BONES REVIEW
Verified purchase
This item arrived quickly Via Amazon prime.

The picture quality of this Blu-ray is dark, but very good overall. Fine detail is exceptional, although occasionally difficult to notice due to the darkness of the picture. I encountered no issues whatsoever with the audio quality of the film. Dialogue and sound effects were crystal-clear.

Like many people, I was expecting a film similar to 300, due to the style and nature of the movie. In some ways it is very similar, and in some ways it is different. Most of the sets are very small; not much bigger than what you would see in a play. I personally like this style, as it gives the film an unusual quality similar to that of Bram Stoker's Dracula. Unlike 300, the fighting in the film is not overly stylish, nor is there an excessive amount of it. Though there is indeed quite a bit of violence, it actually serves a legitimate narrative purpose in this film. It's not just violence for the sake of showing violence on screen, which is a change I found quite refreshing.

The thing that impressed me the most, is the seriousness with which the story takes itself. Whereas a film like 300 comes off as more of a comic book experience, Inmortals has a strong focus on drama and mythology. Comedy and sensationalism are basically nonexistent in this movie. Overall, it surprised me. There's an emphasis here on character development and dialogue, and the film has a very unique look. The movie was well cast, well acted, and a pleasant deviation from the experience I was expecting.

hydraReviewed in the United States on May 6, 2019
3.0 out of 5 stars
Warning!!Digital code exp May 3, 2019!
Verified purchase
Warning!! Digital Code expired May 3, 2019. I ordered this May 2 and received it May 5. Besides the expired code (they normally work after the expiration date), the website for Relativity Media no longer works since they filed for Bankruptcy. I finally found an email address for Fox who was also a producer of the film and emailed them for assistance. I included photos of digital code insert page that showed it expired 2 days before I received it. They replied today that they cannot provide me a replacement code since it expired (2 days prior!!).

The movie itself is entertaining and beautiful cinematography. Not the best Greek/Roman Gods movie but still fun to watch
14 people found this helpful

ReyReviewed in the United States on March 31, 2020
3.0 out of 5 stars
Beware! Deceiving product description
Verified purchase
I understand that digital copy offerings can expire but past that expiration date, it is misleading to represent that the combo pack includes digital copy when attempts to redeem it and an email to Fox customer support confirms that they will no longer support the offer.

I understand that the packaging would be too expensive to update, but not updating the product description on the Amazon listing is not honest.
9 people found this helpful

ConfederateReviewed in the United States on July 1, 2021
1.0 out of 5 stars
Unforgettably BAD!
Verified purchase
This is the worst movie I've seen in years.

A movie is a summation of all parts. Script. Casting. Direction. Acting. Character Development. And lighting.

THE IMMORTALS failed in each of the above, and miserably. As a mythology buff (primarily Greek, Roman, Norse), I was prepared to give this film a very wide leeway; however, I had to suffer my gag reflex to get through it. So let's go through it again.

The script was awful, the casting, dreadful The gods looked like models from GAY QUARTERLY, and the costumes looked like auto parts from a junkyard that were spray painted gold.

The directing was abysmal and there was absolutely no character development. It should thus come as no surprise that the entire move was astoundingly, horrendously, dreadfully awful. Much of the movie was so dark that I could barely see anything on my Kindle Fire, even when the lights were dimmed.

I wish I could find a strong point about the film, but all the strong points were in how bad the movie was.

Zeus, the King of the gods, has vanquished the Titans and placed them in a mountain guarded by a giant wall. He lives by one unbreakable law: the gods cannot directly interfere with the affairs of men. This is odd because in Greek mythology, the gods were incessantly interfering in the affairs of men. Heracles, Theseus' cousin, was one of the gods, and a character that had virtually no lines in the movie, was simply an onlooker. His entire life was spent as a mortal with superhuman strength. One wonders why he wasn't the protagonist of the movie, but it is actually Theseus who has this dubious honor. I can't recall the name of the actor at the moment, but he played another two-dimensional character called Superman in MAN OF STEEL.

If you are taking a college course on how not to make a movie, I unhesitatingly recommend this movie. Otherwise don't waste your time or money.
One person found this helpful

Fromdefo1Reviewed in the United States on January 12, 2019
3.0 out of 5 stars
Just Okay, not good and not bad.
Verified purchase
It did star Henry Cavill (Superman) while he was younger. He was excellent while the movie was a very dark and dismal setting. This was a classic good guy bad guy theme. The bad guy parts often went a little or a lot too dark, which turns the movie into a cheap blood and slime movie. The bow and arrow of the Gods was spectacular special effects which might have made up one minute of view time altogether. I gave the movie 3 stars because of Henry Cavill and the bow and arrow. That's it. Luckily, I rented it.
7 people found this helpful

Raphael LouisReviewed in the United States on November 29, 2020
5.0 out of 5 stars
Best 3D disk I own...
Verified purchase
This is the best 3D disk I own. (Beware: I'm not a CD/DVD/Blu-ray buff and my collection is small, for now.) But amongst the 3D Blu-Rays I have, this one stands out! The 3D is done JUST RiGHT, making things pop with a quality that I don't see in any of my other 3D Blu-Rays... It's BEAUTIFUL! 3D pops out of the screen with clarity and resolution that is AMAZING! Images are SHARP, BRIGHT, well balanced, 3D is beautifully applied to each scene as all other 3D disks out there should be, but are not (most of the time there are quite a few scenes in other 3D disks that totally look regular 2D instead of 3D (e.g. Tron Legacy, Blade Runner 2049, etc.)) You will NOT be disappointed with your purchase (If you like the film to begin with).
P.S. As usual, I find that ALL 3D disks need to go through a process of calibration (adjusting the settings of your TV to allow for the best viewing image). This disk is no different, and this is ESPECIALLY true for this disk, because 3D is so "deep" that you may need to adjust your "3D depth" until all things focus in place. It took me a couple of minutes to adjust the 3D settings just right in my Sharp, 65" Quattron... But once that was done, I was like, WOW!
One person found this helpful

C. HughesReviewed in the United States on July 29, 2019
1.0 out of 5 stars
Audio sucked!
Verified purchase
The audio sucked. The movie was boring and apparently not very memorable because when I got to the end, it felt like I had watched the movie before but simply didn't remember -- probably because I couldn't hear the dialog.
4 people found this helpful

Master JediReviewed in the United States on June 14, 2021
1.0 out of 5 stars
Really disappointing movie
Verified purchase
I really had high expectations for this movie but I found a lot a flaws in it. It has two good actors but both disappoint regarding their performance. Perhaps the major criticism I have is the lighting. The movie is mostly dark and sometimes I really had a hard time following the action. I don't remember ever seeing a well lit scene even when the action was supposed to take place during the day.
The story had a lot of potential but all of it was wasted turning the movie into a mediocre exercise. Had I known, I would have stayed away from this movie saving my self money and time.
One person found this helpful
See all reviews
Back to top
Get to Know Us
Make Money with Us
Amazon Payment Products
Let Us Help You
EnglishChoose a language for shopping. United StatesChoose a country/region for shopping.
© 1996-2021, Amazon.com, Inc. or its affiliates