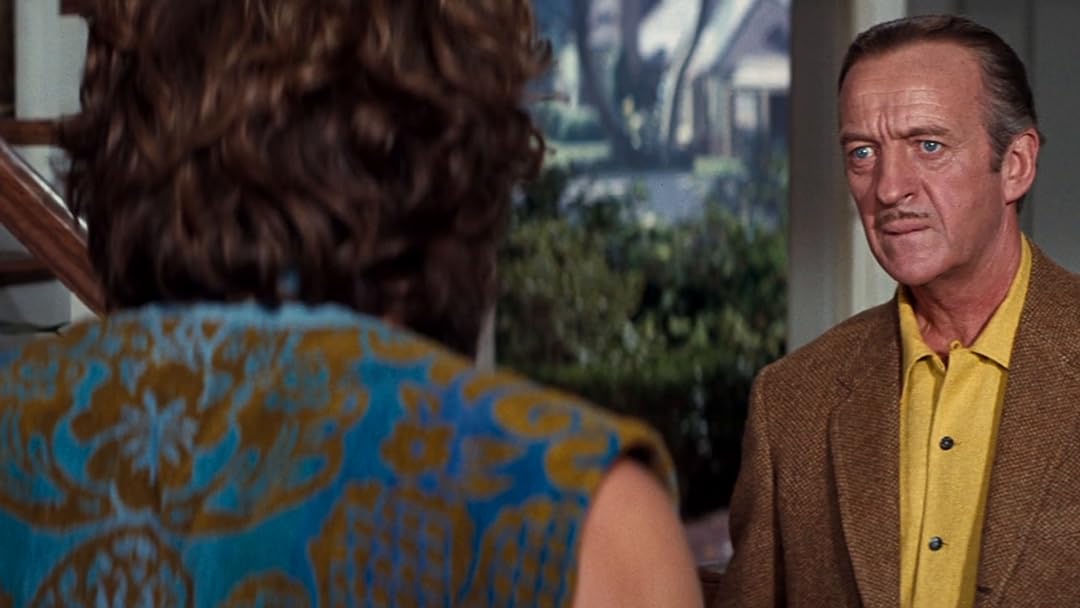 (429)
5.71 h 37 min1968G
Psychiatrist Jonathan Kingsley is an expert on the problems of the adolescent – unless that adolescent is his own daughter.

Grelber37Reviewed in the United States on August 21, 2012
4.0 out of 5 stars
Not even a baby boomer, I like The Impossible Years
Verified purchase
This DVD's jacket calls The Impossible Years a "60s generation-gap comedy." This 1968 dramedy does present the generational clash of its times, and it does so in an intelligently humorous and heartfelt manner. Had John Hughes made movies in the 1960s, he would have made The Impossible Years. One could consider The Impossible Years also a lighter companion piece to The Graduate, Guess Who's Coming to Dinner, Easy Rider, and other films making a social comment upon the changing times.

The plot for The Impossible Years resembles that of What About Bob? Prof. Kingsley (Niven) thinks that he is such an expert on teenagers, and his distinguished work leads him toward great career advancement. However, one case undercuts his supposed "brilliant" knowledge and problematizes his best-laid plans. And, this difficult case lives very close to him--in his own home. Linda Kingsley (Cristina Ferrare) is Prof. Jonathan Kingsley's rebellious seventeen-year-old daughter. As she becomes an adult, she displays "problem" behaviors. She joins campus protests, fails classes, smokes cigarettes, keeps a slovenly room, and wears revealing outfits. And, most of all, she has "problems" with the opposite sex. Sexual rebellion plays a large role in this work just before the Sumer of Love. Director Michael Gordon did Pillow Talk, and The Impossible Years is often another light sex comedy. The social scientist finds that he can no longer control and understand his children. Much social commentary and insightful comedy follows. Niven and Ferrare (all of eighteen at the time) do great jobs in their roles.

The Impossible Years is heartfelt. I felt for the Kingsleys. Families struggle when parents and kids have a parting of the ways. The parents are baffled and struggle. The kids struggle as they become adults. As one tagline puts it, "the teenage years are tough--especially for the parents." Similar to a Hughes movie, The Impossible Years switches tone toward its denouement. Eventually, Linda is in a more mature romantic relationship. Eventually, she needs a more independent living situation than that at home. She must become a woman instead of a big teenager playing around with her boyfriends and generally getting on her parents' nerves. A viewer feels for the situation. We have all witnessed the late teen departing the nest.

As mentioned, the cast makes this movie happen. Niven was a master actor, and he is on his game here--from the silliest scenes to the most weighty. Ferrare is a very talented woman to this day, and she shows those talents in this role. Perhaps, being only eighteen at the time helps. The supporting cast supports too. I was never once distracted by bad acting.

Could The Impossible Years be better in any ways? I offer a brief note. The Impossible Years is rated-G. A 1968 movie, it premiered in the MPAA's nascency. In reality, The Impossible Years is more like a hard PG-13. Why? Well, the story contains somewhat explicit sexual dialogue, partial nudity on several occasions, and aggressive sexual "play." You see, Linda's boyfriends are kind of grabby and otherwise piggish. Their behavior is presented always as improper and ungentlemanly. However, their aggression is played for comedic effect. The scenes are like a Peppy LePew cartoon. These boys will be boys. On one hand, these scenes are artifacts of the time, and today's audiences might still have a good laugh at ultra-awkward situations. On the other hand, current audiences might see such behavior as quite unfunny.

Other humor might be a little dated as well. We have no pies in the face. But, as
mentioned, The Impossible Years has its share of physical comedy and cute dry quips do occur throughout the film. Then again, audiences tolerate and like both of those things on sitcoms and such.

Rosalie KarthReviewed in the United States on March 1, 2020
5.0 out of 5 stars
A good comedy.
Verified purchase
I love d this movie since I saw it in the 1960s. It also takes me back to raising my own teenagers except I was a single mom.
One person found this helpful

StephanieReviewed in the United States on July 10, 2021
1.0 out of 5 stars
Offensive horrible movie 🤮
Verified purchase
I know it is a product of its time but it is horrifying that girls and women were treated this way.

Luana ZentnerReviewed in the United States on May 2, 2021
5.0 out of 5 stars
Entertaining, you may learn about teenage daughters
Verified purchase
It's a pretty good film especially if you have raised a teenage daughter!

SKYHReviewed in the United States on April 19, 2016
5.0 out of 5 stars
Great memory
Verified purchase
I bought this movie because it was the movie my mother and I saw together that was the best time I spent with my mom when I was a child. My mother has passed but that memory stayed with me.
6 people found this helpful

Russell SReviewed in the United States on August 18, 2014
4.0 out of 5 stars
Very cleaned up sex romp from 1963
Verified purchase
let's keep in mind this was 1963 and the morals and tenets of the time were so different. let go of your views of today and just watch and have a good time. David Niven as the College Psych Professor and Dad of 2 girls is great, so is Lola Albright as the wife and mom. The 2 daughters, 17 year old Cristina Ferrare, not that good and 14 year old daughter Darlene Carr, very fun and musn't forget the 3 baeaus trying to get the 17 year old in the sack all make for a lot of cleaned up and homogenized fun.
One person found this helpful

JacqueReviewed in the United States on October 12, 2020
5.0 out of 5 stars
Older comedy that still resonates today
Verified purchase
Like the actors. The subject matter is timeless.