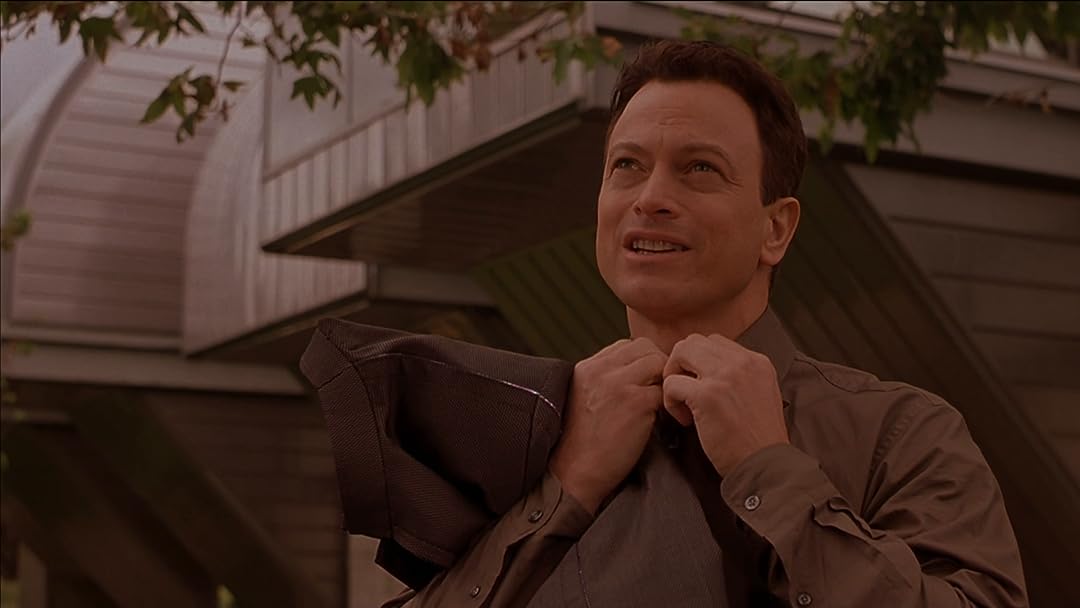 Jack GriffinReviewed in the United States on February 24, 2020
5.0 out of 5 stars
This film is a pretty good Sci-fi thriller. There are lots of twists and turns.
Verified purchase
I caught the first half of this film years ago, and always wanted to see the full feature. I also like the pre and post work of the main characters, both in film and on television.
I recommend this film for folks who like P.K.Dick's novels and stories, and this one translates to the screen better than some.
3 people found this helpful

BalgarFungReviewed in the United States on May 28, 2021
2.0 out of 5 stars
Limited Plot
Verified purchase
Many reviewers have read the book or seen another version. The movie was all I had to work from. Based on the description under the movie, I thought the plot would be more about aliens and humans and the battle to discover those that could be aliens. Nah, the whole move is about whether the main character is an alien. That is it. You learn nothing more about the alien race or other aliens. I guess the first clue was the title "Imposter" instead of "Imposters"

Bryce A. SuderowReviewed in the United States on February 3, 2017
5.0 out of 5 stars
This was excellent. The second version was an attempt at making ...
Verified purchase
The dvd I bought had two versions of the movie. The first was a short film of about 40 minutes duration. This was excellent.

The second version was an attempt at making a full length movie and it was not successful. In fact I felt the endless chase sequences detracted from the power of the original movie.

If you get this movie make sure you get a dvd that has the original short movie on it.

NilsReviewed in the United States on September 30, 2012
4.0 out of 5 stars
A good movie
Verified purchase
IMPOSTOR is a good movie, a solid and effective adaptation of Philip Dick's short story. The screenplay is gripping and tightly written. It's a wild ride, troubling, involving. The story is simple in a way, but not simplistic.

All of the key characters' performances are good, and some are extraordinary. Gary Sinise is spot-on as the protaganist, Spencer Olham, accused of being an inhuman duplicate of himself. Madeleine Stowe gives a genuinely moving performance in the role of Maya, Olham's wife.

The effects are uneven, which I expect is due to the movie's origin: it was originally conceived as a short for television, then the producers switched gears in midstream and retooled it into a full length feature. Some of the visuals are borderline, by today's standards, reminiscent of some bad moments on the Sci Fi channel. Others are excellent, so don't let that stop you from seeing the movie.

Looking past the uneven SFX, the movie is well worth seeing. One caution: if you haven't seen IMPOSTOR, be wary of the reviews that contain spoilers. Much of the story's impact has to do with specifics of the plot it's best not to know about when watching it the first time.
7 people found this helpful

MensRea@aol.comReviewed in the United States on April 14, 2015
3.0 out of 5 stars
The movie's not bad, but it is quite different from the short ...
Verified purchase
The movie's not bad, but it is quite different from the short story on which it is based. There's nothing inherently wrong with that, but in the course of the retelling's plot development, some annoying holes or disconnects have developed. (Possible spoiler alert...) For example, the site of the detonation, in the middle of the woods, makes little sense; targeting the site of the advanced weaponry project would have been a more suitable target. And while the tropes of implanted memory and the uncertainty of identity are touched upon, the treatment of these subjects could have been more interesting. Further, in the story, Spence's best friend was feverishly demanding his immediate execution, for in times of chaos or war, one is tempted to kill whatever might constitute a threat whether the evidence supports such rash behavior or not; in the film, he's an onlooker with arguably conflicting feelings about Spence's fate, neither lobbying for the execution nor for Spence's being saved. The latter may reflect a more enlightened companion or nuanced character, but the former treatment underscores the human predisposition to rush to judgment when frightened. That being said, the movie may serve to entice some viewers to read more of the Phildickean oeuvre, wherein these ideas are explored from a variety of perspectives in a consistently provocative and entertaining way. Other cinematic treatments of these subjects may be found in Blade Runner, Total Recall, Paycheck, and other films inspired by Dick's fiction. This is an enjoyable movie, but it didn't quite achieve its potential.
3 people found this helpful

L. E.Reviewed in the United States on November 6, 2020
5.0 out of 5 stars
PKD again brings light to "what if.."
Verified purchase
while i'm guessing that it is not very high on most people's radar, this is a very well done "paranoia" film that many will lose interest in quickly, but it is an interesting mindful test of what one believes to be who is telling the truth

S. R. HooverReviewed in the United States on October 6, 2017
5.0 out of 5 stars
Rare & exciting
Verified purchase
A rare & unexpectedly interesting sci fi movie starring some of the best folks out there these days. I am surprised I had never before heard of it, and am happy to add it to my library. It was not available on Netflix or through Spectrum.
One person found this helpful

D. G. LuttrellReviewed in the United States on December 6, 2008
5.0 out of 5 stars
One of those saturday back channel TV movies that deserve better
Verified purchase
Out of the 3, (at this time) movies made from the sweat of Philip K. Dick,
I find that this one the best, because it relies, on a larger part, more
acting than special effects. Not that Philip K. Dick's certainly dark
view of the future is not followed, such as in "Blade Runner", & "Total
Recall", just in case the fans of the written works of Mr.Dick were
wondering, (and you know who you are my darlings). That dark, desperate,
derailed & sometimes deranged future is still there, where things are
quite what they were or are represented. I find Gary Sinise's acting
quite excellent, as the main character Dr. Spencer Olham,
Vincent D'Onofrio as the extremely dedicated head of planitary security,
makes a good heavy. This movie will keep you guessing to the explosive
ending. Worth owning if you are a P.K.Dick fan, or just like good
sci-fi.
4 people found this helpful
See all reviews
Back to top
Get to Know Us
Make Money with Us
Amazon Payment Products
Let Us Help You
EnglishChoose a language for shopping. United StatesChoose a country/region for shopping.
© 1996-2021, Amazon.com, Inc. or its affiliates