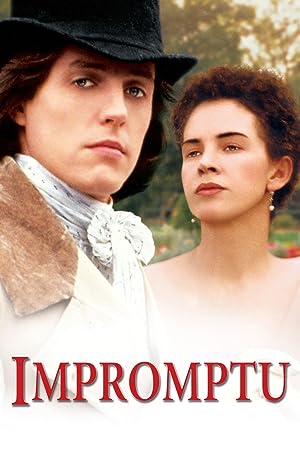 K. ReynoldsReviewed in the United States on January 9, 2019
5.0 out of 5 stars
Outstanding story - Dream cast!
Verified purchase
This is one of my favorite films ever! The story of writer George Sand's romance with composer Frederic Chopin is a delight from start to finish. Writer Sarah Kernochan captures Sand's fiercely independent spirit with humor and charm. An amazing cast features Judy Davis as Sand, Hugh Grant as the awkward & gifted Chopin, Julian Sand as a fiery Franz List, with Bernadette Peters as his manipulative mistress Marie D'Agoult; Mandy as Sand's former lover, writer/poet Alfred de Musset, Ralph Brown as lady's man artist Eugene Delacroix, and a Emma Thompson as a young duchess hoping to import Paris into her country drawing room in an ill-fated and hilarious weekend. Artists are artists with all their quirks; so are artist's children. This isn't a farce, but a memorable peek into the bright young talents of mid-1800s France. Filmed in France, cinematography in locations and sets is outstanding. "Impromptu" is always a happy surprise when I play it for friends - especially those who have never heard of it. And it makes a great gift, too, for anyone who loves history, romance - the highlight is Sands' pursuit of Chopin - and the eccentricities of people everywhere.
11 people found this helpful
Report abuse

johnfReviewed in the United States on June 7, 2015
4.0 out of 5 stars
A Chopin Comedy. Yes, you read that right.
Verified purchase
First of all you should know this is a comedy. Perhaps most people already know this, but because it's really hard to imagine a comedy in which one of the major characters is Frederic Chopin let's get that straight from the beginning. Secondly, it's not really about Chopin's music and though there is some in the film its never really the focus. The focus is the pursuit of Chopin by noted French author George Sand, played with remarkable intensity by Judy Davis, a performance that lifts the whole film from the trifle it otherwise might have been. Chopin is played by Hugh Grant, who actually does it well enough since this is a rather young Chopin. Chopin is too complex for me to imagine anyone playing him except maybe in his last years by Alan Rickman. Mr. Grant plays him dandyish and proper but not effete, though being Hugh Grant he always looks much too healthy to be the delicate composer. The rest of the cast are all notable actors playing notable Nineteenth Century Europeans, with Emma Thompson particularly fun as a ditzy Duchess.

The Movie divides itself naturally into two parts. The first is a country house comedy, one of those set ups where a group of people gather at a country estate where all types of things may ensue. In this case it's a slightly over-the-top comedy that borders on farce.At times it seems to get a bit too silly, then something happens that restores balance, like an incident where Chopin shows he has a sense of real human decency the others, for all their accomplishments, are lacking. Upon a return to Paris the movie shifts gears somewhat and becomes a more earnest story of Sand's growing infatuation mixed with serious concern about Chopin and her attempts to gain his affections. I find this part of the film much more affecting than the country house comedy and rather wish it had consistently been made in this tone rather than the farcical beginning.

Don't come thinking you're going to learn much about this group of luminaries of the 1830's because you won't. Though the characters are historic, most everything else is imaginary. Come for an enjoyable light comedy and you'll be satisfied.

An instructorReviewed in the United States on December 20, 2019
5.0 out of 5 stars
Great movie
Verified purchase
Great movie, with lots of symbolism, and if you think of our current climate, with terrorism perpetrated by school children, I find this older movie interestingly premonitory. It asks deep questions about shared responsibility, and it makes you think, even though it seems to be just a romantic comedy. What would it take to save the world? Apparently a lot of types of artists that belong to a team :-) Being kind is also just as important as being revolutionary. A lot more below the surface than appears at first sight.
5 people found this helpful
Report abuse

MifavoritethingsReviewed in the United States on January 27, 2021
4.0 out of 5 stars
Enjoyable period rom-com
Verified purchase
This modern dramatization of the romance between a famous writer George Sand and an epic composer Frederic Chopin is quite entertaining, thanks to some great acting by Hugh Grant, Judy Davis, and Emma Thompson. Wished the script were more witty and inspiring, but this production may not have been intended for an art-house film. I really enjoyed the cinematography of the French countryside as well as the staging of the set. The scene where George lies under the piano to hear Chopin's music stood out as one of the best scenes. I would have done the same if Chopin was to play his nocturns for me.
One person found this helpful
Report abuse

mobyReviewed in the United States on July 21, 2021
5.0 out of 5 stars
a brilliant, underrated comedy of love and Classical music.
Verified purchase
funny and touching, in the vein of "Tom Jones", Judy Davis stars as unique, liberated writer George Sand as she pursues the composer Chopin (Hugh Grant) while putting off former lovers (Mandy Patinkin and young Julian Sands as fellow composer Franz Liszt) and lampooning her high society hosts (including a dizzy Emma Thompson). don't be put off by the unfortunate packaging, this is a clever and hilarious historical romp.
One person found this helpful
Report abuse

Re-master loverReviewed in the United States on March 5, 2016
5.0 out of 5 stars
Impromptu; Encore.
Verified purchase
I love this film. And always have since I first saw it in the theatre. The cast is unbelievable, and every performance is top notch. Great script, funny and literate. So I give that part 5 stars. The Blu-Ray release looks ok. It's sharp and the colors are vivid enough, but while watching it, I was thinking that it did not look as impressive as other Blu-Rays I've seen, more like a very fine looking DVD than Blu-Ray. But still I'm glad it's back in the limelight and hopefully people will discover it, or rediscover it.
8 people found this helpful
Report abuse

BookWormReviewed in the United States on March 4, 2021
3.0 out of 5 stars
It's OK, nothing to write home about ; ) pun intended
Verified purchase
Interesting bit of history about the writer George Sand and Chopin
I watched it almost to the end. It was OK with some drawn out lulls and some things that
were simply not interesting or predictable....as is the ending. It just didn't hold my attention
any longer One of the few movies/ books etc I didn't finish

Wendy ScottReviewed in the United States on July 17, 2014
5.0 out of 5 stars
A Blast from the Past
Verified purchase
This is one of my favorite movies. Anyone who loves classical music will adore it. The backtrack of Chopin's piano music is exquisite. This movie is hilarious and touching, with gorgeous locations and costumes, and gives us insights into the thoughts and lives of some favorite composers and artists of the 19th century. This was the first movie I'd ever seen Hugh Grant in, and I just thought he was perfect as Chopin. Apparently, he spent long hours working on perfecting his faux piano playing so it really looks authentic. Judy Davis was amazing as George Sand, and other roles included such wonderful actors as Bernadette Peters, Emma Thompson, and Mandy Patinkin. It doesn't get much better than this. For those of you who are pianists, after you watch, look up a certain name at the beginning of Douz Ètudes and discover what I did. What fun!
3 people found this helpful
Report abuse
See all reviews
Back to top
Get to Know Us
Make Money with Us
Amazon Payment Products
Let Us Help You
EnglishChoose a language for shopping. United StatesChoose a country/region for shopping.
© 1996-2021, Amazon.com, Inc. or its affiliates