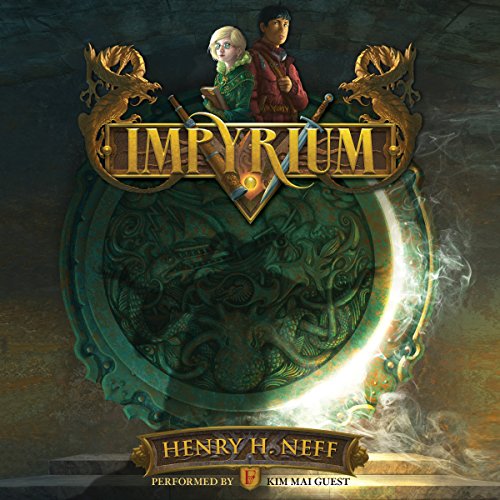 In the first book of Henry H. Neff's new high-stakes middle grade fantasy series, two unlikely allies confront a conspiracy that will shake the world of Impyrium to its core.

For over 3,000 years, the Faeregine dynasty has ruled Impyrium. But the family's magic has been fading, and with it their power over the empire. Whether it's treachery from a rival house, the demon Lirlanders, or rebel forces, many believe the Faeregines are ripe to fall.

Hazel, the youngest member of the royal family, is happy to leave ruling to her sisters so that she can study her magic. But the empress has other plans for her granddaughter, dark and dangerous plans to exploit Hazel's talents and rekindle the Faeregine mystique. Hob, a commoner from the remote provinces, has been sent to the city to serve the Faeregines - and to spy on them.

One wants to protect the dynasty. The other wants to destroy it. But when Hazel and Hob form an improbable friendship, their bond may save the realm as they know it - or end it for good.

Your audiobook is waiting!
Learn more about membership
List Price: $44.49
You Save: $5.56 (12%)
By completing your purchase, you agree to Audible’s Conditions Of Use
Sold and delivered by Audible, an Amazon company

Macky Santiago
5.0 out of 5 stars The saga Continues
Reviewed in the United States 🇺🇸 on October 13, 2021
Verified Purchase
This is pretty dark considering its middle grade origins but the Tapestry series went to a pretty dark place anyways. One might even say this book does away with any pretense of telling a middle grade story and just takes a really good stab at being the kind of tale that it is.

As a sucker for impossible friendships I adore this book. The lore is lush and exquisite, woven intricately through an equally complex plot. Lots of things happening concurrently but at its heart are two people I have come to root for and would do just about anything to find out what else happens to them. It is a great standalone but I would have devoured eight more books about Hazel and Bob.

Not my first re-read and certainly not my last!
Read more
One person found this helpful
Helpful
Report abuse

Krysta Bolton
5.0 out of 5 stars I'm so happy to be back in this world again
Reviewed in the United States 🇺🇸 on January 12, 2017
Verified Purchase
I'm so happy to be back in this world again.I read the Tapestry series and loved them . this book is Legend of Korra to the Tapestry's avatar the last air bender. The world between the first series and Impyrium has evolved not into what it had been which is our current world but into a world where technology is limited . Magic is used more but only a fraction of people are born with it. It's nice to see how Rowan looks again but also sad so much has happened and most people think of Max, David and Mina as myths almost not believing half the things that they did. This book was a little slow and I just wanted answers most of the answers I wanted where about the past and why Impyrium was the way it was . I could tell who was fooling who for the most part but I would think the two main characters who are children put the Pieces together pretty well for there age . The pace was a bit slow at times and I did get Board waiting to see what would happen next but the last 20% really made up for it. And I relies the world the author was trying to make and how I should feel about the characters and that does make the progress slow for me but I'm thinking there won't be a need for that in the next book unless they travel to a land that is new . I can't stop thinking of the book and I know I will have to wait forever for the next one but it was worth going back to this world are world just altered . I also think you could read this without reading the other books but I think it would be way more enjoyable if you read the tapestry books first .
Read more
2 people found this helpful
Helpful
Report abuse

Justin Piehl
5.0 out of 5 stars Great sequel to the Tapestry Series
Reviewed in the United States 🇺🇸 on December 5, 2021
Verified Purchase
I had just finished The Red Winter when I found out about this book. It's interesting to folllow up on what's happened since then. I anxiously await the sequel.
Read more
Helpful
Report abuse

Peaches
5.0 out of 5 stars I read this in one night!
Reviewed in the United States 🇺🇸 on October 14, 2016
Verified Purchase
So there I was, reading "Impyrium", which was preordered. I loved the "Tapestry" series, but it's been a minute since I've read them. This new book has the same adventure, flair, and colorful writing from the original books. In reading it, I discovered where in Henry Neff's historical timeline that we were located, and really enjoyed reading all of the clues from the previous books. Neff's storytelling is, as always, so much fun to read. It was interesting to see how the world had progressed in the time between the last book and this one, and Henry Neff deftly played with the memories of his past characters as seen by the character's in today's world. After I polished off this book I had to go back and re-read "The Red Winter" to bring back my memories of the first series. If you haven't read the "Tapestry" series yet, finish off this one, and read the others while you wait (perhaps impatiently) for the next book in this series.
Read more
12 people found this helpful
Helpful
Report abuse

Kindle Customer
5.0 out of 5 stars Intricately woven, historically rich world filled with intrigue!
Reviewed in the United States 🇺🇸 on March 1, 2017
Verified Purchase
Henry Neff has developed an intricately woven, historically rich world where we find the main characters Hob and Hazel, 2 teens wise beyond their years, grappling with the "hand" they have been dealt with. For Hob, that means rising up above his meager upbringing, without a father figure, in the outer city of Dusk; Hazel, on the other hand, has to find her place within the Faeringine family (Rulers of Impyrium), where forces at play are trying to manipulate her destiny. The ending is explosive, very satisfying and leaves you longing for more. A wonderful collection of supporting characters, such as the Empress and Sigga, are well crafted and imbue the story with a sense of mystery and intrigue. I have not read the Tapestry series, but I was easily able to jump right in despite missing some insight from previous books. My twelve-year-old daughter also devoured this book and is eagerly awaiting the next installment!
Read more
Helpful
Report abuse

Barbara Ryon
5.0 out of 5 stars A read into the future of Rowan
Reviewed in the United States 🇺🇸 on January 4, 2021
Verified Purchase
3,000 years is a very long time to live under one dynasty. Although Mr. Neff brings Rowan forward three centuries, with no new changes, it seems like the dynasty might finally fail. But he works his magic and brings his love of Rowan into the forefront. A good read.
Read more
Helpful
Report abuse

Kindle Customer
5.0 out of 5 stars Impyrium by Henry Neff
Reviewed in the United States 🇺🇸 on November 6, 2016
Verified Purchase
I love music and am an auditory person. Mr. Neff's writing is, to my ears, pure music filled with suggestion, tension, silence, pause and climax. I have finished two of his original series and my mind is definite enthralled by his surround style of writing. If you enjoy good fantasy fiction and enjoy the cadence of well written words, I think you will definitely enjoy his writings. On top of that, his world and characters are well developed and defined and the plots are well crafted. I am enjoying every second of my reading and am loking forward to the second volume of his secon d series of which Impyrium is the first volume. Do yourself a favor and enjoy the entire series.
Jim
Read more
One person found this helpful
Helpful
Report abuse

Connor French
4.0 out of 5 stars Lovely jubly
Reviewed in the United States 🇺🇸 on September 2, 2017
Verified Purchase
This was a great spinoff to the tapestry series. Set a few thousand years in the future after the events of Max, David, and Mina we see what the world has become after the destruction of Astaroth. I loved this world I loved the thought process that went into creating this government and all it's problems and the different views that each faction has about what happened. How the events of the previous books are now regarded as myth and legend in imperyia. I would definitely recommend this to anyone who loved the tapestry series.
Read more
One person found this helpful
Helpful
Report abuse
See all reviews