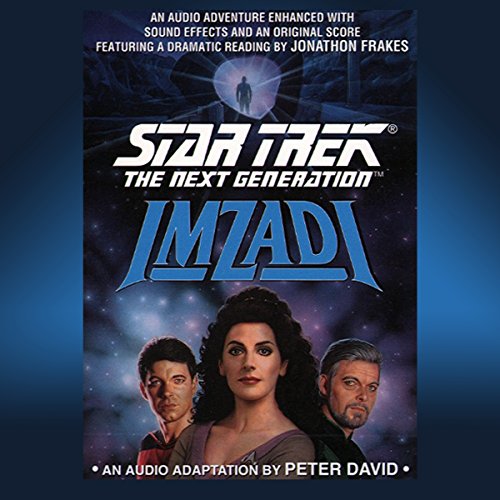 Imzadi: Star Trek: The Next Generation

Years before they became crewmates on the U.S.S. Enterprise, Commander William Riker and ship's counsellor Deanna Troi had a tempestuous love affair on her home planet of Betazed. Now, as their passions have cooled, the two serve together as close friends. Yet the memories of what passed between them linger and Riker and Troi remain Imzadi, a powerful Betazoid term that describes the enduring bond they still share. On a delicate mission involving negotiations with an aggressive race called the Sindareen, Deanna mysteriously falls ill...and dies. But her death marks the start of an incredible adventure for Riker - an adventure that takes him across time, pits him against one of his closest friends, and forces him to choose between Starfleet's strictest rule and the one he calls Imzadi.

Miss josette
5.0 out of 5 stars Imzadi
Reviewed in the United States 🇺🇸 on July 13, 2020
Verified Purchase
I am a star. Trek fan. I had this book on tape but wanted on another medium, this a purchased this. The story is great and I enjoy listening to it.
Read more
Helpful
Report abuse

Lisa Y.
5.0 out of 5 stars Loved it
Reviewed in the United States 🇺🇸 on April 2, 2015
Verified Purchase
wonderful book - have listened to it many times. Great background to the Troi and Riker relationship
Read more
2 people found this helpful
Helpful
Report abuse

xaqbazit
4.0 out of 5 stars Always changing
Reviewed in the United States 🇺🇸 on September 21, 2012
I am a comic fan and picked this up on the idea that if Peter David found something interesting to write about here I would like to read it. I am a casual Star Trek Next Generation and Deep Space Nine fan and remembered these characters from there. The story itself was great because every time I thought I had figured out the genre IE: Romance, action, science fiction, it changed. The story really is in 3 parts and changes genre in a way that is fulfilling the expectation of each, as it progresses - which I found amazing. The story does delve a bit too far into being gratuitous, some of the one liners and set up for a scene are a bit overt and make you groan. It might be that Diana's race were not accustomed to humans but they didn't tip toe around any of the issues and didn't really sound like how people talk. No one impied or infered anything, they just came out and said what they meant. Character repeadidly use the phrase "What in hell" instead of "what in the hell" which I found irritating. But the narrator, who played his character on the show, did a great job, even of immitating Pickard at time, which was strikingly good. Though he does read slower than most narrators his inflections kept me interested even though there is minimal sound/music fx. All together it was much better than I anticipated to get from my first Star Trek audio book.
Read more
3 people found this helpful
Helpful
Report abuse

Margaret Noonan
3.0 out of 5 stars Not the full book :(
Reviewed in the United States 🇺🇸 on February 24, 2021
I LOVE THIS BOOK! I’ve read it multiple times, and as such I was excited to discover that there was an audiobook (read by Jonathan Frakes no less!) so of course I bought it right away. However I was upset to find that it was an abridged reading. I didn’t even make it 10 minutes in before I realized it was missing parts. I wish it would have been better advertised that this was not the entire book before I bought it.
Read more
3 people found this helpful
Helpful
Report abuse

Sentinel
5.0 out of 5 stars A good read (listen)
Reviewed in the United States 🇺🇸 on April 2, 2019
JOhn Frakes does a great job of reading the story. He adds the voices of characters to the story. I read the book a couple years ago, but to hear Lt. Riker tell the story was a special treat.
Read more
Helpful
Report abuse

Jodi B
5.0 out of 5 stars Best Star Trek Book Ever
Reviewed in the United States 🇺🇸 on July 11, 2019
Love this book. Love that it's narrated by Jonathan Frakes.
Read more
One person found this helpful
Helpful
Report abuse

Jason Scott-Bey
5.0 out of 5 stars Imzadi Explained
Reviewed in the United States 🇺🇸 on August 30, 2018
Great story and explanation of the term Imzadi. Well thought out story and love how Riker will change history or restore history for his beloved!
Read more
Helpful
Report abuse
See all reviews