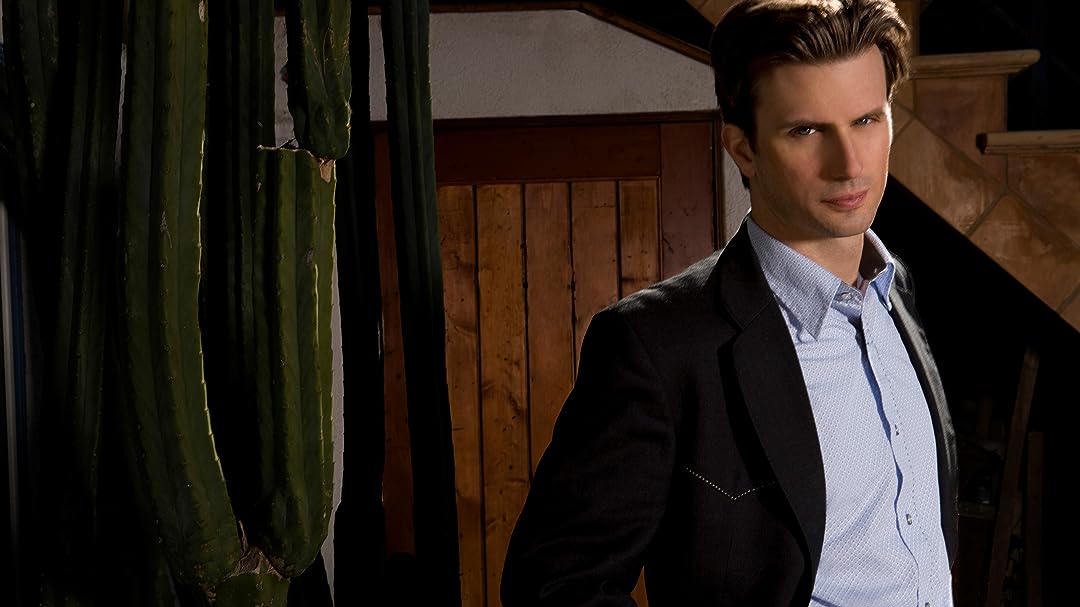 (377)7.32010X-RayTV-14
Mary McCormack stars as Mary Shannon, a U.S. Marshal working in the highly secretive branch of the witness protection program (WITSEC) who relocates Federal Witnesses - many of them career criminals, and many who are innocents that had the misfortune of witnessing a crime. They all have one thing in common - someone wants them dead. Mary's job is to see that doesn't happen, while at the same time attempting to manage her own dysfunctional family.

Mark Baker - Carstairs ConsidersReviewed in the United States on May 21, 2015
5.0 out of 5 stars
"I Love It When You Talk to Me in Greeting Card."
Verified purchase
Change never goes well with fans of a show, and that was the case with season three of In Plain Sight. Between seasons two and three, there were some major behind the scenes changes, including the creator of the show leaving. That was reflected in what we saw on the screen. Some fans hated the changes, but I actually liked them.

For those unfamiliar with the show, it centers around Mary Shannon (Mary McCormack), a marshal in WITSEC, the witness protection program. Along with her partner, Marshall Mann (Frederick Weller), they protect witnesses who have been relocated to Albuquerque under the eye of their boss Stan McQueen (Paul Ben-Victor). In this season, they deal with an informant reluctant to enter the program, a thief trying to go straight, a witness who has just awaken from a three year coma, and a bomb making witness.

Meanwhile, Mary's family life is finally going well. Mother Jinx (Lesley Ann Warren) has sobered up and gotten a job. Sister Brandi (Nichole Hiltz) is doing well in college and has a steady boyfriend (Joshua Malina). That's not to say that her private life isn't without drama. Her love life is still in turmoil and there's her half-brother Scott (Aaron Ashmore) who Brandi has managed to track down. What does he want?

While I have enjoyed the previous seasons, I was very tired of the family drama. Jinx and Brandi were self-destructive, and Mary enabling them grated on my nerves. I liked the fact that this aspect of things was fairly stable for a change. For some fans, this was the biggest point of contention for the season.

On the other hand, they wrote Eleanor Prince (Holly Maples) out of the show. She'd been brought in during season two as a foil for Mary in the office, someone who wasn't cowed by her like the men are. I loved their dynamic and really missed it, but it makes sense Holly would leave the show since she is the wife of the series creator.

While these changed generally led to a lighter season than the first two, this is still the most serious show I watch on the USA Network. (I watch all but their Law and Order spin off.) Yes, we've got Mary's wise cracks and tough talking attitude for laughs, but the situations that the witnesses find themselves in are often serious. I mean, this is a show about people uprooting themselves because of crime. That's a serious subject. And watching Mary helping those who need it yet being tough when they need it too is one of my favorite dichotomies of the show.

What really makes this show work is the acting. Mary McCormack is able to balance the two sides to Mary's character perfectly. One minute, she's snarky and the next she's compassionate, and I buy every second of it. Frederick Weller is really given a chance to shine this season as well, and his character of Marshall seems more real as a result. The rest of the cast does fine as well, and the guest stars always work well with the series regulars.

There were only 13 episodes in season three, but all of them are here in full screen and surround sound on 3 discs. In the way of extras, we get two commentaries by Mary McCormack and Frederick Weller plus deleted scenes and cast interviews.

For me, season three of In Plain Sight found the perfect blend of some comedy with the more serious drama the show has always had. I'm hoping this continues in season four.

Book loverReviewed in the United States on September 19, 2020
5.0 out of 5 stars
Great TV series
Verified purchase
This is an older (last 5 to 10 years) but it has staying power. The characters are well written and played. The subject matter about US Marshalls witness protection is facinating. There is drama and humor in the series and several subplots, but they all fit fit with the original plot and make sense. I recommend watching all seasons of the show and the fact that is is 5 or 6 years old does not date the subject matter or character. What a nice break from all of the reality and game shows of today.
One person found this helpful

Donald HuntReviewed in the United States on May 2, 2015
5.0 out of 5 stars
The Season When The Show Started To Change.....
Verified purchase
When this show first came on, I did not care for it,
and did not watch any of the first two seasons.
But then I gave it another shot, and looked at it in
a different light, as I started to enjoy the "sarcasm",
and edgy/dark humor.
Then came season 3, and the show started to change
what got it all those viewers.
Mary McCormack, many times looked as if she was bored
out of her mind, and wanted the show to be over with.
To compensate for that, more cast members were given bigger
roles, and the show shifted quite a bit.
It managed to keep going, sometimes limping badly, for two
more seasons, before it finally ended.
If you own all 5 seasons, you will see the all out attempt to keep
the show on the air, as story lines played themselves out.
Still worth watching them all again.
Mary McCormack is still one of my favorites.
4 people found this helpful

Lincoln County MTReviewed in the United States on March 30, 2013
5.0 out of 5 stars
Loved this whole series. 10 stars if I could!
Verified purchase
We Binged watched this whole series from year 1 through year 4.5. Really loved the writing and the actors. Almost addictive and just wish it had managed to keep going a few more years...as into at least 7 full years. But it is what it was and that was very very good the whole show went out on top and in good standing. But like a good book when it's over it's over. Onto find something else. We don't get cable/satelite so rely on the DVD's and great reviewers from fans here on Amazon to figure out what we might like and enjoy. Someone reviewing The Closer mentioned this show and so glad I took their suggestion up. I can't recommend one season over the other as they were all just great and pretty much as good across the board. It was a bit disconcerning when the younger females kept going through pregnancies and their figures changed considerably but the show handled it well and really todays world they pretty much go with the flow and except for some creative shots and clothing aimed not to point it out they do pretty good. I'll miss Mary and her side kick and glad they didn't ever put them together...good for the writers and directors and makers of this show.
4 people found this helpful

A. Lynn BowmanReviewed in the United States on January 20, 2013
5.0 out of 5 stars
A Knockout Series
Verified purchase
I decided to give "In Plain Sight" a preview on Netflix as it seamed interesting. After the first disk I decided it was good enough to at least give it a chance so I watched the nextdisk and I was hooked! This show is amazing, each episode has the snitch of the week that goes into Witness Protection and almost every weekly story is a hit. The real beauty of this show is the ongoing family darama between Mary and her family as well as the shenanigans between her co workers. As a member of AA for 13+ years I can tell you the family problems related to this are very real life and they show much of this with enough humor to make me appreciate the honesty. If you buy Season 1 you will be hooked, I have the first three seasons now and will soon buy 4 and 5 to completye my set. I just can't say enough about this show, IMHO it is remarkable.
3 people found this helpful

Julie Schmidt Reviewed in the United States on May 22, 2010
5.0 out of 5 stars
Great Entertainment
Verified purchase
I was a huge fan of West Wing, I miss all those characters. When I stumbled across this show I was ecstatic. I own every episode, and Thursday is my favorite night of the week, because I can see the new episode. I do not usually watch episode by episode for a TV show, I prefer to wait until the whole season is available, but this show is worth it. Mary is a believable person with a complicated family, and fierce loyalty to the job and her charges. She will lay down her life to protect perfect strangers. This episode is the absolute best one, as it shows her several years back, and how her and her current partner Marshall met, and she decided to become a Witness Protection Marshal instead of a track them down to justice Marshal.
2 people found this helpful

rileycatReviewed in the United States on May 29, 2012
5.0 out of 5 stars
In Plain Sight season 3
Verified purchase
This show is the perfect balance between action and personal lives. Mary McCormack must take care of an impossibly blonde sister and an alcoholic mother and look after her charges in the witness protection program, while trying to find a few minutes here and there for a personal life with someone she doesn't love. Fredrick Weller is the right choice for Mary's partner, competent but adding a little humor to the mix. By the end of season 3 he is in love with Mary, but he keeps it to himself. I have bought the first 3 seasons of this show and I highly recommend In Plain Sight to everyone. It is too bad that season 5 is the last for the show.
2 people found this helpful

elizabeth bromesReviewed in the United States on May 31, 2019
5.0 out of 5 stars
Great to watch.
Verified purchase
I have enjoyed all the seasons. Ready to order season 5. Thank you.
One person found this helpful
See all reviews
Back to top
Get to Know Us
Make Money with Us
Amazon Payment Products
Let Us Help You
EnglishChoose a language for shopping. United StatesChoose a country/region for shopping.
© 1996-2021, Amazon.com, Inc. or its affiliates