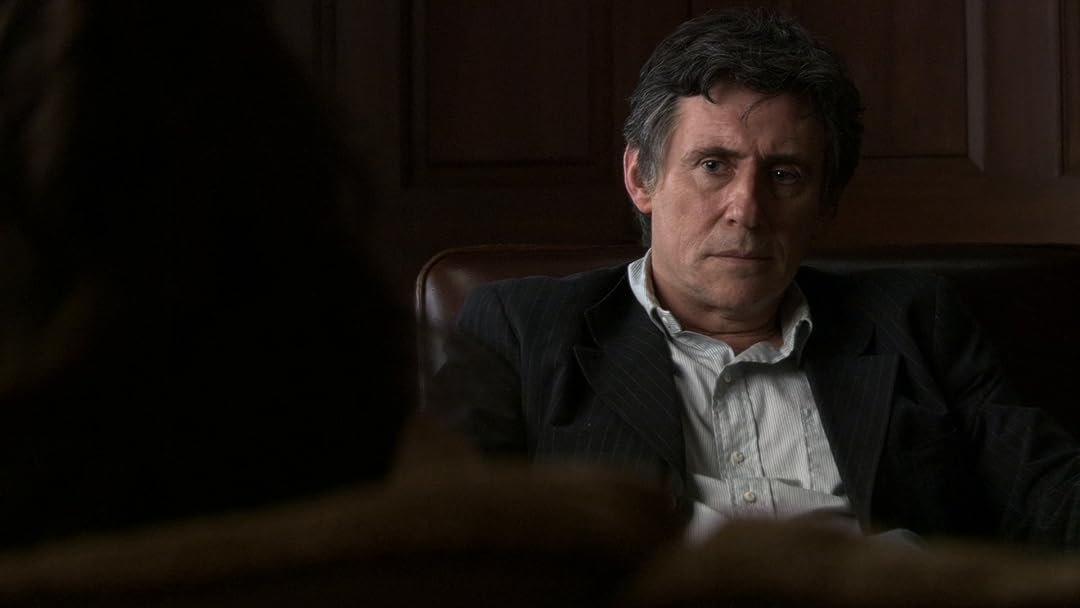 MBMReviewed in the United States on October 21, 2016
3.0 out of 5 stars
GREAT! Except episodes with Gina
Verified purchase
I first watched the Sophie episodes only, and I thought, "This is the most brilliant show I've ever seen. Amazing acting. Unbelievable attention to detail with facial expressions and body language, since half of the show's content is displayed in those most subtle indicators." The episodes spoke deeply to me, I guess, maybe because my own psychiatric illness and therapy issues are most like hers. I don't rewatch shows, but I rewatched those.

Then I went back and watched the others.

On a subjective level,
I've had bad experience with therapists and therapeutic relationship boundaries, and the Laura episodes brought back flashbacks from that even though my issues weren't the same as hers. Warning to anyone else triggered by that subject!
I didn't relate to anything with Alex's circumstances or mindset, and my marriage is happy so I didn't relate to much of the couple's struggles either.

On an objective level, the show was incredible regardless of whether I could personally relate to the characters. I was better able to relate to a foreign mindset because of the show.

MY BIGGEST ISSUE: The sessions with Gina
WHAT THE HECK??? I felt sick by the end of every episode because he spent the entire time criticizing a kind, thoughtful woman trying to help. He threw stuff, yelled, belittled, and basically tried to destroy her. It was very, very upsetting.
It doesn't even make sense! He spent the rest of the week as a thoughtful person helping others, but then within three minutes of seeing an old friend, he rips into her? He backs down and says a nice thing ever five minutes or so and then goes against what he says while he rants about her evil motives and how she's just out to get him and just wants to cause him personal suffering. WHAT???
Just now in week four with Gina, Paul is telling Gina she has no empathy, that he thought she never even liked therapy, that why would she do something with people who seem so disgusting to her - all of which is clearly not true, so where is this coming from and what the heck is it doing in the show?
The episodes with Gina are why I reduced my otherwise 7-star review to 3 stars, not because her acting was bad but because the screenwriting was TERRIBLE.

Robert RalstonReviewed in the United States on June 9, 2015
5.0 out of 5 stars
"In Treatment." — Rich Treat for a Mature Audience.
Verified purchase
Top notch.

Actors, writers, multi award winner. Authentic depiction of how a good therapist works and the toll his work takes on him and his life. A therapist is a human being who has taken years to develop his/her skills and to learn the meaning of confidentiality and client centered orientation.

Being human, Dr. Paul Weston wrestles with his own role as a person whom troubled people come to have their problems "fixed." He must help the patient understand that he can't fix anything. They must confront their own demons and make hard decisions as he gently and wisely gives them guidance. There must be a separation — a line that must not be crossed — between therapist and patient. Paul comes close to that line and briefly crosses it with a patient. We eavesdroppers come — as a result of great acting — to feel his emotions and his struggle to put this aside and think of what his patient's need, even as his own private life faces a crisis.

My primary career was as a physicist. Concurrent with my work in physics, I earned an advanced degree in counseling psychology. I practiced counseling for 10 years.

During my training, I had a few chances to sit behind a one-way window and observe a session. From playing the role of eavesdropper (viewer) to this process, I was able to observe other therapists working with diverse patients. I found that not all therapists have the same ways of approaching their clients. This is where the therapist's own background comes into play. "In Treatment" shows how one very skilled therapist has to face his own demons to be as helpful as possible. for his patients.

I am reviewing season 1, but have binge watched all 3 seasons and can attest to their quality
There are only a few top notch series available in reruns and this one deserves a place at the top. I highly recommend it.

Bob Ralston — Author of "God, Physics, And Me."
9 people found this helpful

K. AdeleReviewed in the United States on July 4, 2016
5.0 out of 5 stars
Good story line, excellent acting
Verified purchase
The treatment of the therapy process is accurate. As occurs in the real world, everyone -- including the therapists themselves -- questions the value of therapy. By the end of the season, it is not clear that any of the protagonists have experienced happier or more fulfilling lives as a consequence of the therapy they experience. The drive to be honest and to let it all hang out is gut wrenching, and as the show illustrates, can yield tragic consequences. Sometimes it is better not to venture into the deep, dark recesses of the mind and heart. On the other hand, there are aha! moments when the patient's experience breakthrough insights that enable them to understand better why they feel and behave the way they do. The acting is first rate. Each of the five patients the doctor is treating is credible and, by the end of the season, worthy of our sympathy. Given that the nearly forty episodes of the show take place in the a therapist's office, it is amazing how the excellent script and fine acting keep us riveted to the drama as it unfolds.
6 people found this helpful

BassvampReviewed in the United States on October 5, 2015
3.0 out of 5 stars
Story could have been so much better....
Verified purchase
I was interested in the subject matter. This show is well done, and and began with great potential.

I just became less interested when they went down the rabbit hole regarding the main character-intelligent psychiatrist falling head over heals in love with a long term patient, a lady known to him to be emotionally crippled, devious and sick... he then wrecks his own home life over this nonsensical fantasy. Blech! I expected more Intelligent behavior.

Tired of shows that dumb-down to cheap-thrills when the potential for so much more is right there.

Btw, am a Big fan of Gabriel Byrnes, just didn't like where this series was going.
12 people found this helpful

DoctorBobReviewed in the United States on September 1, 2015
5.0 out of 5 stars
A terrific start with high quality drama.
Verified purchase
As a certified therapist, a physician and a psychologist, I was curious to see how the writers were going to handle the subject. I was very impressed with the verisimilitude displayed by both the writers and the actors. Yes, Virginia, there is a therapeutic relationship just like the one shown here. Of course, a real practice has more than 5 patients and a whole lot less drama each week but otherwise it's an accurate picture.

That's the good news. The bad news is that this excellent writing and acting seem to take a progressively steeper decline as the seasons progress. 5 stars for season 1, 3-4 for season two, and 1 for season 3. I'd suggest you stop watching after the first season.

SPOILER ALERT:
this intelligent and competent therapist turns into a real jerk who listens less and talks more as the show goes on. By season 3, You will find your self throwing things at the TV.
8 people found this helpful

Kindle CustomerReviewed in the United States on March 27, 2015
5.0 out of 5 stars
Totally Hooked!
Verified purchase
I was completely hooked on this series after the first episode and had to limit myself to one "week" of treatments per evening and to take a break from In Treatment every couple of days. This show will definitely not be everyone's cup of tea. If you don't enjoy thinking, if you are not interested in how people's minds work - how frustrating and complicated people and their relationships are you will be bored or confused by what happens to the characters. My first thought was that it must be terrible to be a psychotherapist. What Paul Weston (Gabriel Byrne) goes through with his patients is traumatic for everyone involved. Then you get to see Paul Weston with his therapist. What an incredibly clever idea for a drama! The acting is superb. You feel for these characters. Many times you dislike them or want to bang their heads together. Sometimes it is difficult to watch. But you find yourself rooting for them to find their way. If you like a lot of physical action you won't find it here. About 4/5 of the show takes place in one room and the room itself almost becomes one of the characters. The plot, like life, is completely unpredictable and there were no happily ever afters. Just, if lucky, another chance to try again tomorrow.
5 people found this helpful

Jeannine VicteryReviewed in the United States on May 13, 2017
5.0 out of 5 stars
So is the unnecessary amount of sexual detail
Verified purchase
This is a series of thoughtful, gradual character studies of a psychologist and some of his patients, week-to-week. It's in real time (or very close to it), lending a distant sense of "reality" TV, except with depth and storytelling. The creator (Hagai Levi) and lead writer (Sarah Treem) are also paired in The Affair, a showtime series that aired several years later and which (I think) is better-known. Their moody style; their focus on the difficulty of accurately assessing other people's motives and knowledge sets; and their interest in timing and the importance of place (even, in this case, a single room) are all recognizable between the two series. So is the unnecessary amount of sexual detail, except here it's all verbal re-telling, so it doesn't feel as distracting from the plot as the borderline porn in The Affair.
One person found this helpful
See all reviews
Back to top
Get to Know Us
Make Money with Us
Amazon Payment Products
Let Us Help You
EnglishChoose a language for shopping. United StatesChoose a country/region for shopping.
© 1996-2021, Amazon.com, Inc. or its affiliates