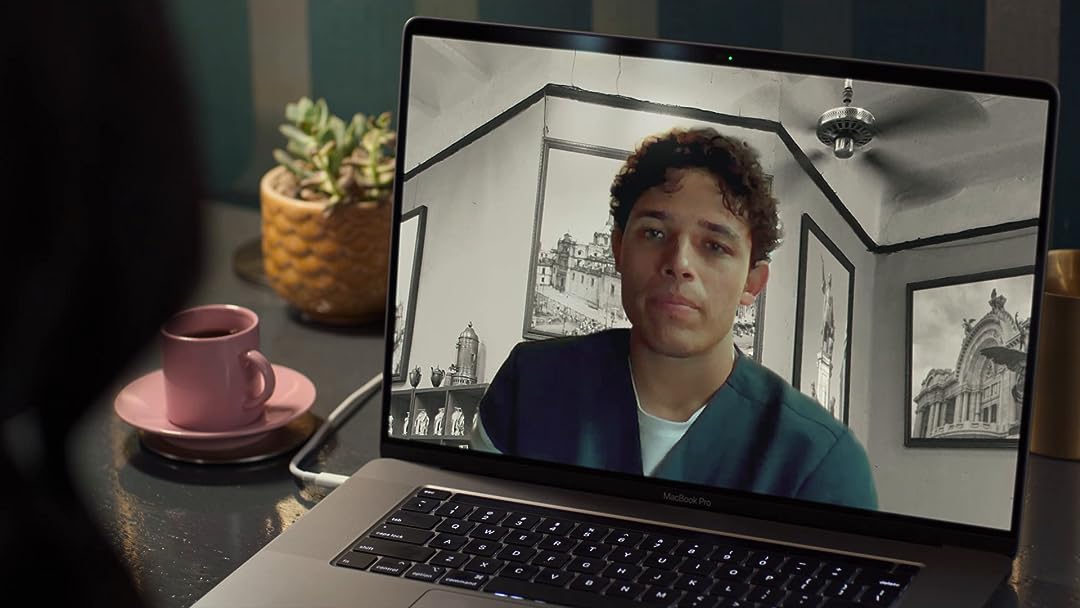 Paul AllaerReviewed in the United States on May 24, 2021
4.0 out of 5 stars
3.5 stars... Reboot is finding its feet, just give it some time
As Episode 1 of "In Treatment" (2021 release; 24 episodes of about 25 min. each) opens, we are introduced to Dr. Lawrence as she gets a late night call from a patient who suffers from sleeplessness. The patient, a live-in health care provider named Eladio, and Dr. Lawrence have a session the next day, virtual of course as the pandemic is omnipresent. Eladio is hoping to get a prescription for sleeping aids, but Dr. Lawrence resists, for a number of reasons, and much to Eladio's frustration. In Episode 2, we are introduced to Colin, a white collar criminal who was recently released from a 4 year prison term. He meets with Dr. Lawrence in person. What exactly did he do to go to jail? And how is Dr. Lawrence going to help him exactly?

Couple of comments: "In Treatment" originally aired on HBO in 2008-2010, to much critical acclaim and strong ratings. Now more than a decade later comes "Season 4", but that is really misleading and for all practical purposes this is a complete reboot of the series, considering it's been over a decade since it last aired and also as it is starring a new therapist (Orange is the New Black's Uzo Aduba, replacing Gabriel Byrne). I'll be honest, I had a hard time getting into Episode 1 with the young live-in health care provider. I simply could not connect with him emotionally or otherwise. Episode 2, on the other hand, is far more interesting and engaging for a number of reasons. Even though this is an in-person meeting, COVID-19 is mentioned more than once, and other current topics including George Floyd and the Black Lives Matter movement come up in discussion too. I'm interested to see how this will develop.

"In Treatment" premiered this weekend on HBO and Episodes 1 and 2 are now available on HBO On Demand, Amazon Instant Video, and other streaming devices. New episodes air on both Sunday evenings and Monday evenings at 9 pm Eastern. Episodes 3 and 4 will air tonight, and will feature two more new characters. Even though I was ambivalent about Episode 1, I liked Episode 2 enough that I will check out further new episodes. All that aside, I will admit that I couldn't help but compare "In Treatment" to the recently completed Showtime Season 2 of "Couples Therapy", the real life documentary about, well, couples in treatment, which I found absolutely riveting and top-notch TV viewing.

*UPDATE 5/25/21* I just watched Episodes 3 and 4. In particular Episode 4 ("Brooke, Week One") is of interest as the therapist meets with her sponsor and we are given all kinds of new details as to the erstwhile life of the therapist, and how addiction potentially keeps her from making good judgment calls in her personal life...

SaskiaReviewed in the United States on May 29, 2021
4.0 out of 5 stars
How Therapy Really Works...
I very much enjoyed the original series with Gabriel Byrne and was looking forward to the new release with a different actor as therapist. Uzo Aduba is a remarkable and talented actress with tremendous depth. I think the writing is superb and reveals an extremely talented therapist. We should all be so lucky. My only complaint with the show is why does every main character have to have some sort of addiction? I just don’t see this woman as a drinker. Though I do see her as someone who might have issues with compulsive overeating. Now that would be a radical concept; Actually dealing with food addiction. I get the feeling that it was just too shameful and complex for the writers to deal with. It’s just so much sexier to be an alcoholic or drug abuser. But much more common and sometimes just as destructive is food addiction. Just wish that this is subject could be addressed with honesty compassion.
10 people found this helpful

E SnowReviewed in the United States on May 31, 2021
1.0 out of 5 stars
None of the quality of the original
It would have taken a lot for a reprise to have matched the old series that was based on an Israeli production. This doesn't come even close to measuring up.
9 people found this helpful

Pamela CourtsReviewed in the United States on May 31, 2021
4.0 out of 5 stars
I came here for Uzo Aduba
I watched the first four episodes and frankly was not sure if I liked this show. Until I watched the fifth episode. Watching Brooke uncover the layers of what is troubling Eladio had me glued to the screen. The dynamics between the two felt very real and I felt like I believed in Ms. Aduba as a caring therapist who has a special talent for finding ways to connect with her patients by getting them to open up and share their deepest thoughts and feelings.
As with all shows, I am willing to watch the rest of the season before I make a judgment about whether I think this show is a good one. I enjoy watching as the characters develop and as their lives become more transparent to the audience. Another reviewer said they had a hard time seeing Brooke dealing with an addiction and then followed that comment with a rude insult about the main characters weight. Such judgmental comments really have no business here whatsoever. Addiction is not a stamp that one wears on their forehead and although people may seek to judge those who are not "one size fits all," like all assumptions they are most likely wrong and speak more about the character (or lack of) of the author than anything else.
5 people found this helpful

prisrobReviewed in the United States on June 18, 2021
5.0 out of 5 stars
The Doctor Is In
In Treatment season 4, is a series that will entice you and entertain you, and at the same time is a therapy session. Uzo Aduba As Dr Taylor is the center piece and her patients, boyfriend, other therapists revolve around her. Uzo exhibits an amazing sense of what a therapist is and the role of mentoring others while caring, for her patients.

In this series, Dr Taylor has as many problems as her patients, and it seems at times she talks openly about her issues comparing them to her patients. She does have great insight, but not into herself.. This has been mentioned many times in talk groups. She handles her patients well, and she seems to be able to make definition between her patients and colleagues/family.

As the six sessions continue, we see good depth in change for her patients, and even loosening of her strict ties upon herself. There is hope, and the intelligence Dr Taylor exhibits is evident to all. She handles family and even her own issues with great insight.

Each episode is 27-29 mins long. They go very quickly and cover a great deal of ground. 6=episodes forceCh patients and Dr Taylor. I am quite impressed with the depth of this series and the excellence in writing and acting.

sweetpeaReviewed in the United States on June 14, 2021
5.0 out of 5 stars
As a Black female therapist, I had to watch this
The actor was also a big draw. I really enjoy it though I miss some of the silences and evocative questions that help a client tell their story. It goes right into interpretation to quickly. And there are times when she should celebrate how good she is, instead of drinking after she acknowledged and contained a client's anger being happy to make that progress. Alcoholism is common in helping professionals. Where is her therapist? By the way, she is thick, in all the right places. In my Black community that is considered attractive and not a sign of addiction.
7 people found this helpful

LLReviewed in the United States on June 22, 2021
3.0 out of 5 stars
Well acted, story lines weak except for Brook
I absolutely love the original series with Gabriel Burne, I bought dvds when it first came out. Not only was lead inteteresting, but most storylines were engaging. Not previously familiar with actress now playing the lead as therapist, she carries the show. I'm to the point where I'm skipping the storylines with patients just to watch her story unfold (and come undone). She's an engaging actress and I feel like a separate writer is writing just for her. Don't really care for any of the other storylines but the acting is well done. Miss the writing from Seasons 1-3.
6 people found this helpful

BumblebeeReviewed in the United States on June 20, 2021
4.0 out of 5 stars
In Treatment: The Second Incarnation
Doesn't have the darker (literally), brooding quality of the original 3 seasons with Gabriel Byrne, and I miss that. But this new incarnation of In Treatment is its own animal--although the ghost of Byrne's Dr. Paul Weston does haunt it; apparently he was Dr. Brooke Taylor's mentor/supervisor. I keep waiting for sessions in which she is his patient, as he was the patient of his mentor, Dr. Gina Toll (played by the phenomenal Diane Wiest), rather than the weekly sessions Taylor has with her AA sponsor, Rita, which I find by far the least interesting or engaging of the episodes.

Uzo Aduba as Taylor is pretty fabulous--not the least in her outfits! She is 100% put-together while working: form-fitting, fashionable clothing, every hair in place and makeup perfectly applied, perhaps as an attempt to negate her moments of alcoholic abandon, but certainly to embody and communicate her status and authority as a black female professional (which, notably, white male therapists like Dr. Paul don't have to take into consideration--I know one who wears sweats in sessions). She's strong, smart, witty, and takes no b.s. from patients, such as the manipulative, narcissistic Colin (John Benjamin Hickey). Though it can get her into trouble, one of her best qualities is that she feels deeply for some of her patients; she seems easily to become over-invested and entangled with them, but she demonstrates that good therapists are human.

As others have mentioned, I do wish there were a bit more subtlety and nuance in Dr. Taylor's interactions with her patients--she's sometimes quick to give the answer rather than allowing periods of silence for the patient to figure things out and articulate them. But that's her style as a therapist, and the moments she does, in fact, subtly lead patients to deep insights are deeply moving. Amazing script writing and acting in those moments, which make the show 100% worth watching.
3 people found this helpful
See all reviews
Back to top
Get to Know Us
Make Money with Us
Amazon Payment Products
Let Us Help You
EnglishChoose a language for shopping. United StatesChoose a country/region for shopping.
© 1996-2021, Amazon.com, Inc. or its affiliates