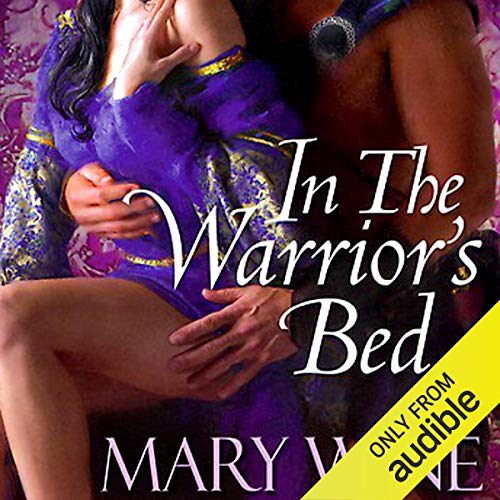 In the Warrior's Bed

traci lynn
4.0 out of 5 stars A warm historical romance
Reviewed in the United States on August 20, 2015
Verified Purchase
I just finished reading this book, and was pleasantly surprised. The book was a refreshing change. The heroine in it didn't feel the need to hide too much from her feelings. There was of course the internal struggle with falling for the hero, but it was not dragged on and on, we actually got to experience the relationship in various stages. Like I said it was a refreshing switch. I usually am a stickler for starting at the start of a series and reading in order but I am glad I gave this one a chance. (Really I didn't realize it was #2, lol) I am now going to read the others in this series.

Romantic at Heart
5.0 out of 5 stars In The Warrior's Bed (McJames)
Reviewed in the United States on March 9, 2014
Verified Purchase
It was a good book. I would rate it a 4.5 star. The one thing I would have liked to see more of is them get to know each other. They didn't really every talk to each other. However even with that said I liked it. It was a quick fast read as are most of her books. They are not in-depth books if you are looking for that thing. I like Bronwyn and I find the boyish side of Cullen charming.

On a side note, once again I find I am disappointed Bonnie's live is not resolved. She makes a point of stating that Alarik McKorey likes her, but her proxy marriage to the cruel Cameron Yeoman is still valid So he just get drunk to forget it. That is all there is on this subject. I have little hopes about in being resolved in the last book, as it is about Bronwyn's brother, and not the McJames. At most you would have hoped for another book about these two, but that is not the case. In stead like in The Highlander Series it seemed like she set you up for a fourth book, but only did three.

Regan
3.0 out of 5 stars 2nd in McJames Trilogy Not As Good As the First
Reviewed in the United States on May 31, 2011
Verified Purchase
First, I must say (again) that the cover artist for Wine's publisher has apparently failed to consider the author's notes about the book. (This happened in her Highlander series, too.) The McJames plaid is not blue and green, as shown, but blue, yellow and orange. (The plaid on the cover is not even the heroine's plaid, which is heather, tan and green.) Typically, Wine is not very good at describing the appearance of the characters (something I find surprising since she has a great mind for detail). Hence, I am always left wondering what some of them look like, including the heroine. Here, the heroine is first described as having "honey silk" hair, which I took to mean light in color though it was not clear, and then finally on p. 235, we learn she has "blond" hair, which is really quite opposite the black hair of the girl on the cover. I`m not sure we ever got her eye color. I couldn't recall it being given. I wish Wine would tell us early what they really look like. Anyway, the covers need to be more accurate. (What was the cover artist thinking?)

Now to the story...it is set in early 17th century Scotland when James VI is King of Scotland (he also becomes King of England in March 1603, the year this story begins though that isn't discussed until the 3rd book in the trilogy). This is the second in the McJames trilogy and tells of Brodick's younger brother, Cullen McJames. Cullen decides to take up the challenge of wedding the daughter of their enemy, the McQuade, a mean laird who cares nothing for his daughter. Cullen wants Bronwyn in order to end the strife between the two clans, and once he sees her, he lusts for her. Bronwyn McQuade is a high spirited lass who resents both her father's cruelty and Cullen's imposing his will on her, first stealing her from her clan and then forcing a seduction and a wedding she doesn't want. Cullen tells the Bishop who marries them that the king has given his permission for the wedding, which removes the need for her father's consent. But the king's permission had a condition, that Bronwyn consent, which she clearly did not. Cullen told no one of the king's condition, but is intent on having his way with Bronwyn one way or another.

I had great empathy for Bronwyn though she never had quite the strength of some of Wine's heroines. Bronwyn deserved to be wooed and not lied to, but in those days, women were mere chattel forced to serve the clan's needs, so there is no surprise at her being accorded little worth. Then she faces the scorn of the McJames clan, as they hate the McQuades for their many raids. That would have happened but it did make me pity her. Her two older brothers want to reclaim her just so she cannot breed to inherit her dower lands. Then even her body betrays her when she finds she cannot fight her attraction for Cullen (another hard to believe element since he did steal her and treat her as if her wishes weren't important). Cullen eventually comes around, but still.

Overall, I didn't like this story as well as the first one. I thought she could have actually had less lovemaking (I actually skipped some of it as it was repetitive. Instead, I would have preferred a bit more story. (I felt the same about the second in her Highland trilogy.) She can write well (Highland Heat, the 3rd in her Highland trilogy is a good one), but this one wasn't quite up to her best. Also, each of the books I've read has the same description of the plumbing of the day...enough with the water delivery system already. I'm giving it 3 stars as it was well-written and at times quite entertaining.
Read more
4 people found this helpful
Helpful
Report abuse

jean
5.0 out of 5 stars Things are not always as they seem.
Reviewed in the United States on November 18, 2019
Verified Purchase
Good characters. Well written. Nice ending for the series.
Read more
Helpful
Report abuse

Amazon Customer
5.0 out of 5 stars Loved it, Loved it, Loved it
Reviewed in the United States on June 24, 2017
Verified Purchase
This author never disappoints. There has never been a time that I have read one of her books and been disappointed. Fantastic read!
Read more
Helpful
Report abuse

Edwina "I Love books"
3.0 out of 5 stars EROTIC STORY WITH LITTLE ROMANCE!!
Reviewed in the United States on March 26, 2015
Verified Purchase
In The Warrior's Bed is the story of Cullen McJames and Bronwyn McQuade to warring clans. Laird McQuade has gone to the court of James of Scotland accusing Cullen of seducing an spoiling his daughter Bronwyn. Bronwyn and Cullen were spotted chatting on the line were there broaders met by her two older brothers Liam and Sadoc. The brothers reported this to there father who always desiped Bronwyn because she was born a girl her was cruel and treated worst then one of the servants.

After being mad aware of his name being sullied before the court and James of Scotland Cullen visits the court and tell James what happened. Jame believes him and not Laird McQuade and sanctions a marriage between Bronwyn and Cullen to stop the gossip and hopefully bring peace between the two clans.

I didn't like Bronwyn much at first but she later grew on me. The story is very erotic with little romance. I found Bronwyn's character not mature enough for a 23 yrs old women. Her character would have been better served as 18 or younger. Like I said by the end of the story I grew to like her. She grow with the story. I loved Cullen!1 So all's well that ends well. I just wanted more of a storyline rather then just so many sex scenes. Sex scenes are great when there is a good story to go along with it. This was not the case for In The Warrior's Bed!!
Read more
Helpful
Report abuse

MAJ
4.0 out of 5 stars Wife stealing
Reviewed in the United States on June 27, 2013
Verified Purchase
Pretty good. Cullen steals Bronwyn to be his wife because her father has lied about them both very publically. The only way to restore his honor is to marry the Laird's daughter against his wishes to prove Laird Erik McQuade lied, and what a horrible person he is to his daughter and clan.
Read more
Helpful
Report abuse
See all reviews

A P
4.0 out of 5 stars Good story
Reviewed in the United Kingdom on March 2, 2020
Verified Purchase
Another good story that carries on from the previous book, 'In Bed with a Stranger'. Good action, but maybe a bit too many sex scenes. Don't get me wrong they were good, but a few less and a bit more of the story might be better. Good read though. On to the next one.
Read more
Report abuse

myrna Hyde
5.0 out of 5 stars The warriors bed Mary Wine
Reviewed in the United Kingdom on May 25, 2013
Verified Purchase
A great read that has everything if you like the highland warrior era. I have read the whole of the series to date can't wait for the last book to become available on my kindle hurry up amazon
Read more
Report abuse

llappy
5.0 out of 5 stars I loved it....
Reviewed in Canada on December 7, 2012
Verified Purchase
so good I couldn't put it down, can't wait to read more of her books. She really knows how to right about love and seduction that keeps you wanting more...
Read more
Report abuse
See all reviews
Back to top
Get to Know Us
Make Money with Us
Amazon Payment Products
Let Us Help You
EnglishChoose a language for shopping. United StatesChoose a country/region for shopping.
© 1996-2021, Amazon.com, Inc. or its affiliates