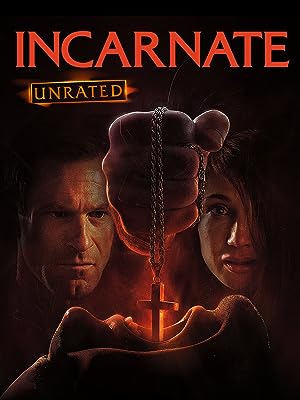 (563)
5.31 h 27 min201618+
Aaron Eckhart stars in this unrated thriller as Dr. Seth Ember, an unconventional exorcist who uses science to remove the demon from the possessed subconscious.

MindTheGapReviewed in the United States on March 26, 2017
5.0 out of 5 stars
Don't listen to the naysayers.
Verified purchase
I enjoyed this movie and think it is worth a watch. New and interesting take on the possession genre.original. Im not sure what all the bad reviews are about ... I don't know if people expect too much out of movies. They watch the previews and get excited and expect their balls to get blown off- this is a movie guys. If you want your heart skip a beat - go climb Mount Everest or something. Get outside and fall in love. But when you watch a movie, don't expect it to live life for you. This is definitely a 5 star movie. High production values, great acting and cool script. I liked it. It is a good rental and does what it is supposed to do- take your mind off of your life for two hours. Perfect!
33 people found this helpful

Alastair HilemanReviewed in the United States on June 6, 2020
1.0 out of 5 stars
Stick to the rules you set
Verified purchase
There was a long list of problems I had with this movie. It feels like they tried to mash House and Constantine into one film. Sounds like a good idea but I was laughing and ranting the whole time. They try to establish a vendetta for the protagonist and the villain but it feels rushed and just thrown into place.

The following contains some spoilers
1. Not brutal enough, it's supposed to be a demon but it's less scary than the jigsaw puppet.

2. Factual errors: the demon says it was there "after the deluge when angels mixed with humans." It's fake history but get it right. The deluge happened after the offspring of angels and humans, known as nephilim, became wicked and started eating people.

You cannot use paddles to shock someone's heart out of asystole (flatline). A common mistake but a mistake nonetheless.

The protagonist states clearly not to touch the possessed person. Yet multiple people who know this rule, including his helpers, break this rule at the end. And this is AFTER one of said helpers tells everyone not to touch him!

If the demons die if they don't touch someone to transfer themselves then why does the demon in the protagonists friend kill himself in a closed building with no way to transfer himself? Why not just run away and inhabit someone else?

4. Implausibility
A man dies from falling 10 feet onto a carpeted floor. Unless he had an blood clot that got knocked loose and caused a stroke I dont know how this is possible.

In the dream realms the protagonist just bursts in, throws a momento at the possessed person and says "all these people you love are fake and you're dreaming." Why trust him over your own loved ones and a personal paradise? It's rushed and doesn't seem very plausible.

If the demon can just kill people by dropping them 10 feet why don't they kill the protagonists friends and kill anyone who gets close to him? For ancient creatures of eternal malevolence they are very stupid and not at all creative.

C. BennettReviewed in the United States on September 2, 2020
1.0 out of 5 stars
Trout Fishing in America Shorty turns Demon Hunter
Verified purchase
Brainless retread of 'The Exorcist'. This man has a 'special ability' to 'enter the minds of possessed people and drive out their demons' when he's asleep'? Why not when he's awake? And how did he manage to stop doing this to lead a normal life if it only happens when he's sleeping? But an especially nasty demon has decided to mess with him for fun. This made-up foolishness is the excuse for an extraordinarily grubby-looking guy in a wheelchair to go around with a high-tech 'team' to 'evict' demons/nasty entities/bad vibes out of others. Aaron Eckhart's canned breathy delivery gets very monotonous as he angrily wheels around failing to do anything useful in the course of this film. Even though this whole thing is presumably about his final battle with this demon, their actual encounters are brief and stupid--no moral/intellectual/emotional jousting, just fantasies of running from/punching out the bad boy (which accomplishes nothing, of course).

Amazon CustomerReviewed in the United States on May 29, 2017
3.0 out of 5 stars
Shrugs
Verified purchase
Fell just a little short of being really good. Man paralyzed from waist down due to a car accident; Has the ability to enter the consciousness of others who are possessed with a demon. He uses this ability to evict the demons from their host. He is then called upon by the Vatican, to take on a possession case involving a high ranking demon. The thing is, the demon he's asked to evict, is the same demon who possessed the drunk driving woman, that killed his family and left him paralyzed. He accepts the job to avenge his family. Again, this movie could have been a whole lot better. The acting was mediocre (Aaron Eckhart did pretty well though). Everything seemed rushed. I felt like the audience wasn't given time to feel out the main character or his associates. The whole Vatican thing felt like it was thrown in to somehow fit in with the genre. I also thought the movie could've been a little scarier. Overall the movie is worth a watch, it's just not memorable.
3 people found this helpful

JWTReviewed in the United States on August 28, 2020
2.0 out of 5 stars
Sigh.......wow. Where do you start.
Verified purchase
Well ok. All I can say is dont run and hide in the room full of chainsaws with a bad person chasing you with a chainsaw......sigh. Dont turn on the lights when it is pitch dark. Oh hey there is a dead person on the floor so let's scream and run but oh I suddenly forgot how to run but not scream. 4 miles between me and the next town but I think it's better to run back into the room full of chainsaws.......again. Uuugh. 2020 and still the same ole horror flick. I've seen worse but cmon give us something good and original. This could have just as easily been another Bigfoot movie.

DOMINFTCReviewed in the United States on June 10, 2020
4.0 out of 5 stars
Great movie
Verified purchase
Great movie. Would have given 5 stars but blu ray had deep scratch which made it unplayable. Standard copy was good.

adrianne harklessReviewed in the United States on June 19, 2017
1.0 out of 5 stars
Worst even when expectations were low
Verified purchase
I literally cannot find any redeeming qualities in this movie. If I could give it 0 stars I would.
2 people found this helpful

Lilyn G.Reviewed in the United States on April 13, 2017
2.0 out of 5 stars
Lots of nope.
Verified purchase
Incarnate begged to be mocked pretty much from the moment I turned it on. To be fair, some of my mocking was aimed more at possession movies in general, but Incarnate just asked for it. It was the perfect example of a cliche possession film with one or two tiny twists. My mocking will reveal tiny snippets of the movie, but nothing big. Still, don’t read below the SPOILERS mark if you’re completely against any type of spoiler.

In Incarnate a poor, tortured soul with special powers must face off, yet again, against the forces of darkness. A force that only he can defeat. And it’s personal. We’re talking “You killed my family, you sonofa—” grudge-match stuff. So of course. And he’s a self-righteous superhero that surrounds himself with assistants that dress in 90s punk. However, because he is the dude he doesn’t bother to share much information with his assistants. Even little stuff like “Hey, if x happens, I’m gonna do y, ok?” And aww, lookit, him’s an atheist buttpucker. Shock and horror! That’s never been done before!

It’s so completely predictable, too. Brad Peyton, the director of such gems as Cats vs Dogs: The Revenge of Kitty Galore, approaches Incarnate as if he delivering the ultimate drama, and it’s so serious but… you know. When the most recognizable movie on your list is a movie about furballs, leaping to a movie about possession might be stretching it a bit. Or maybe at least watch a bunch of these types of movies so that you can maybe prevent yours from becoming a walking billboard for the definition of the possessed cliché.

Incarnate was a waste of time and money. While I probably will watch it again when I need a movie to laugh at, there’s no single redeeming factor in it. Flat, boring, and filled with stupid. It’s not even worth Redboxing. Watch Fallen instead. It’s a better version of what this movie tries to be.
3 people found this helpful
See all reviews
Back to top
Get to Know Us
Make Money with Us
Amazon Payment Products
Let Us Help You
EnglishChoose a language for shopping. United StatesChoose a country/region for shopping.
© 1996-2021, Amazon.com, Inc. or its affiliates