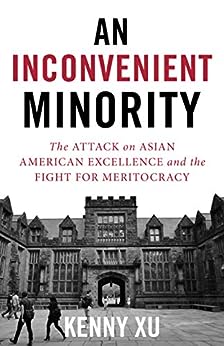 An Inconvenient Minority: The Attack on Asian American Excellence and the Fight for Meritocracy Kindle Edition

New releases
Explore popular titles in every genre and find something you love. See more
click to open popover

Praise for An Inconvenient Minority

"Asian American success shows that hard work, self-discipline, and strong families still pay large dividends in the U.S. Yet Asians now find themselves subject to quotas that limit their access to jobs and admission to selective schools, in part because high levels of Asian achievement undercut the progressive narrative that white supremacy holds back America's minorities. Now, however, as Kenny Xu compellingly documents in An Inconvenient Minority, a revolt is fomenting against these artificial barriers. If Asian Americans lead the U.S. toward a true color-blind meritocracy, An Inconvenient Minority will be remembered as a turning point in that battle."
―Heather Mac Donald, Manhattan Institute Fellow and New York Times bestselling author of The Diversity Delusion

“Among the many inane inventions of race-hustling radicals, the assignment of ‘white privilege’ to Asians ranks among the most absurd. As Kenny Xu explains with politically incorrect clarity, Asians constitute an ‘inconvenient minority’ for leftist social engineers who exploit white guilt to foist a racial caste system upon America. This poisonous ideology reigns in corporate boardrooms and, notably, the halls of the Ivy League. We cannot fix the problem without first understanding it, and Xu offers an indispensable tool to begin that process.”
―Michael Knowles, host of the Daily Wire's "The Michael Knowles Show" and author of Speechless

"Something is profoundly wrong in our equity-obsessed America. Just as we seem to be enveloped in darkness about our future, a light can be seen on the horizon: Kenny Xu, beckoning us to follow our historically well-trodden path of merit. He provides a compelling documentary of merit from the driver’s seat, helmed by members of our American family who have demonstrated the efficacy of this principle: Americans of Asian descent. An excellent read!"
―Ward Connerly, founder and President of the American Civil Rights Institute and former chairman of the California Civil Rights Initiative campaign

"Journalist Xu, who writes for the Federalist, Washington Examiner, and other publications, offers a strident critique . . . Writing as a warning 'about what happens when elite discrimination is legitimized and abetted by the world’s most powerful institutions,' Xu contributes to the ongoing debate about inequality, injustice, and racism that informs recent books such as Daniel Markovits’ The Meritocracy Trap and Michael Sandel’s The Tyranny of Merit."
―Kirkus Reviews

"Contending that the social advancement of 'the Asian American community' in spite of historic discrimination 'directly challenge[s] the Leftist narrative of minority victimhood,' Xu claims that Asian Americans have been left out of conversations about 'diversity, equity, and inclusion' because they suffer from persistent stereotypes and lack the kind of 'cultural capital' necessary to make their struggles visible to the mainstream. . . . Xu raises intriguing questions about the place of Asian Americans in U.S. society."
―Publishers Weekly

Kenny Xu is the lead insider on the Harvard case and a commentary writer for The Federalist, The Washington Examiner, The Daily Signal, and Quillette. Xu has spoken on the consequences of the Harvard case and its identity politics ideology in front of groups as diverse as the nationally renowned Pacific Legal Foundation to the Boston Rally for Education Rights to the all-Black Connecticut Parents Union. His commentary has propelled him to interviews with NPR and features in the New York Times Magazine. He lives in Washington, DC. --This text refers to the hardcover edition.

Tags that will help you discover similar books. 6 tags
education & teachingamericaspolitics & social sciencesliterature & fictionsociologyunited states
Results for:
Page 1 of 1Start overPage 1 of 1
Previous page
Next page
Where do clickable book tags come from?
Book tags are created from a variety of sources, some of which are customer-generated. Amazon is not legally responsible for the accuracy of the tags represented. If you are an author or publisher and would like to remove a tag associated with your title, please contact your vendor manager or publisher support team.