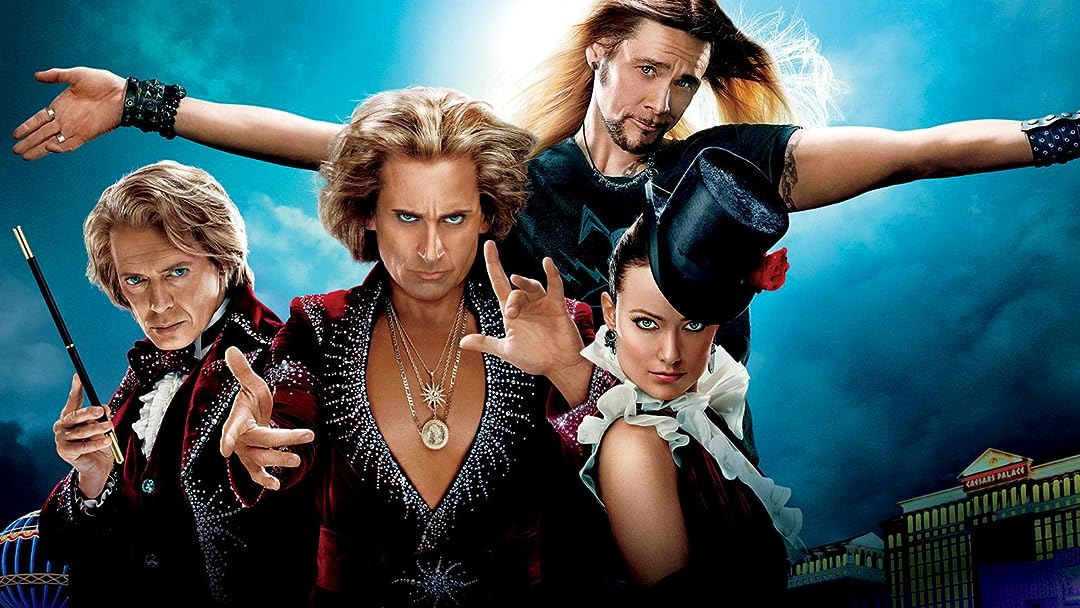 (4,022)
1 h 40 min2013X-RayPG-13
HD. An egomaniacal magician tries to make a comeback after his partner quits and a daredevil rival takes over the Vegas strip.

joel wingReviewed in the United States on March 28, 2021
3.0 out of 5 stars
Rekindling the love of magic
Verified purchase
Steve Carell and Steve Buscemi are a traditional Las Vegas magic act with a long running show on The Strip. The story is about their fall from grace and then redemption. The movie has some laughs but it’s also about the love of magic. The movie starts with Carell as a kid getting his first magic kit and how excited he was. He finds out that wonder once more when he’s an adult. It even mocks the street magicians that have become popular with Jim Carrey’s character doing things like not peeing for a number of days as part of his act. I saw this in a theater when it came out but it’s actually better now seeing it again.
One person found this helpful

DucreReviewed in the United States on September 18, 2021
4.0 out of 5 stars
I passed on this when it came out, that was a mistake!
Verified purchase
Really funny, a lot more heart than I expected. I love everyone attached to this movie: Jim Carrey, Steve Carell, Steve Buscemi, Olivia Wilde... but I mean, it looked so dumb. That was a fault with the promotion department, not the movie. Yes the costumes look dumb, of course there is some juvenile humor for cheap laughs, but you'll have real laughs, and get way more invested than you expect. There's humor, romance, comeuppance, redemption, and friendship! Will it change your life? Of course not. Will it make your evening better? If you like humor, it will make it much better. Definitely worth a rental.

Karl WeaverReviewed in the United States on December 23, 2013
3.0 out of 5 stars
Semi-Comedy
Verified purchase
If you think Siegfried & Roy without the tigers, that defines the two characters at the center of this movie, who have a standing magic show in Las Vegas. Steve Carell is the lead magician and his partner is an old childhood friend who followed him into a career in magic. Of almost nostalgic interest, James Gandolfini plays the manager of the casino resort where they do their nightly act, and does a fine job with his bit part.

The Wonderstone act is starting to get a bit stale and then, Bang! along comes unexpected competition in the form of a rogue "street magician" played by Jim Carrey. Carrey brings his usual manic, hyper-intense persona to this character. Soon our magician pair are sniping at each other and then find themselves out of a job as Gandolfini hires Carrey's "street magician" to replace them.

In the end it's about (that's right, a morality play) learning that friendships are more important than ego (or money) as Wonderstone realizes he's no good as a solo act and he needs his long-time friend to back him up.

This is a pretty tame film for family viewing; no nudity, no swearing, no gore. Basically harmless and easy to follow entertainment.

RodriReviewed in the United States on June 15, 2020
5.0 out of 5 stars
Love the Adult Humor and historical nostalgia!
Verified purchase
Funny film that is more suited for Adults. It describes the humor and reality of how magic has evolved from old days to new, and only leaves out the newer visual projector magic on every Americas Got Talent season. This is definitely on my favorite lists, and Jim Carrey does an amazing job of who he impersonates/ magic he represents.
One person found this helpful

David E. BaldwinReviewed in the United States on September 6, 2013
2.0 out of 5 stars
Incredibly Dull
Verified purchase
With few exceptions the laughs are few and far between in this alleged comedy. I was truly disappointed because Steve Carell and Steve Buscemi are two of my favorite performers but they don't seem to have a handle on the thin material given them. Sole redeeming qualities are James Gandolfini(R.I.P., Jimbo) as a casino owner and Jim Carrey as a guerilla street performer who bills himself as the Brain Rapist. Carrey's high wire act recalls his Fire Marshall Bill days on "In Living Color" and anticipates his Captain Stars and Stripes in this Summer's criminally underrated "Kick Ass 2". If only some of his fellow cast members could have tapped into his energy source this might have been a better picture instead of the bore that we are left with.

GG SammyReviewed in the United States on November 17, 2021
5.0 out of 5 stars
Great Movie!
Verified purchase
This movie never gets old! Really funny.. I got it, because I lost my old one, But pretty bummed because the Code to download it, was from 2016! So little disappointed about that, but Live this movie, a must see!

Patricia BeninatoReviewed in the United States on August 11, 2013
2.0 out of 5 stars
Meh.
Verified purchase
There are movies where the actors are compelled by the amazing script to give their best performances. Then there are movies where the actors read the script, ask their agents "how much are they willing to pay me again?" and go for it, mailing everything in. The latter scenario describes "The Incredible Burt Wonderstone," which considering its fairly high caliber of acting power boils down to nothing more than an extremely predictable riches-to-rags-to-redemption story.

Two nerdy eighties kids obsessed by a mail order magician's kit grow up to be Burt Wonderstone (a glammed-up Steve Carell) and Anton Marvelton (a less glammed-up Steve Buscemi), the magician superstars of the Vegas strip. However, offstage they hate each other and their popularity among the flyover crowds who adore them is being threatened by Steve Gray (Jim Carrey, who fifteen years ago would have starred in this), a "street magician" in the mold of Criss Angel and David Blaine, whose idea of magic is pulling a playing card out of a self-inflicted facial wound and holding his urine for weeks. After an attempt at edgy magic goes awry, Burt and Anton go their separate ways, Anton distributing magic kits to third world children and Burt reduced to entertaining at a nursing home for former Vegas performers. Lo and behold, the magician who inspired him as a child (Alan Arkin) lives at the home and ... I'm sure you can guess the rest.

"The Incredible Burt Wonderstone" isn't horrible, it's just REALLY predictable. I felt bad for Olivia Wilde, who's the only one that turns in a credible performance--she's also the only one who delivered a line that made me laugh. However, her character also becomes reduced to cliche. I'm no comedy snob, considering my all-time favorite movie is "Amimal House," but "The Incredible Burt Wonderstone" is just another in a very long line of multiplex filler between the summer blockbuster season and the serious award season. It's not memorable, not particularly funny, but if you want to pass two hours I guess it fits the bill.
One person found this helpful

Joe L.Reviewed in the United States on July 10, 2013
2.0 out of 5 stars
Another pile of stars wasted on a lame plot
Verified purchase
I hope the other magician movie is better. This one reminded me of "Best Defense" from 1984. In that film the movie was screened and labeled a bomb, so the studio dumped $6 Million on Eddie Morphy to shoot a handful of scenes. Those scenes were then edited into the "bomb" and Eddie Murphy's name made top billing even though he was in just 6 minutes. Murphy later said it almost ruined his career.

Now Jim Carey was certainly in the movie more than 6 minutes, but the interaction between Carey and Steve Carell and Steve Buscemi is so limited at the start I wondered if he was added in as an afterthought. Even the credits state "Starring Steve Carell, Steve Buscemi" leaving Cary out.

It might be a good career move to be left out of this billing for Carey since his last several movies hae been less than spectacular. What happened to the "Bruce Almighty" Jim? It seems he is doing the Eddie Murphy career dive only without the Disney-esque personality change.

Buscemi is one of my favorite actors, but miscast as the Steve Carell side-kick. He is just not believable. I think Buscemi would have been better in the role the late Gandolfini had. Although not miscast, Gandolfini was just not ethnic enough for the way the character was written. It seemed to me the character of the casino owner was kind of bland, where it could have been amazing.

As long as I'm pooping on everyone, I should excrete equally on Steve Carell since he was equally responsible for this movie's failure. Come on STEVE! Please don't just play the same guy over and over like Jerry Lewis. You are an amazing actor, so come up with something new. If the director does not have the vision to let you be the great star you are then punch him/her in the nasty bits. Sometimes you have to just say NO to playing the same character over and over again.

The movie had its funny moments but was very predictable. The only unexpected scene was the Buscemi goes to Africa segment. But the rest we all saw coming.It does not even make sense in the continuity and timeline for much of the film.

Don't pay for this, wait until it's on free TV. It's not so bad for free. At least you'll get what you pay for.
See all reviews
Back to top
Get to Know Us
Make Money with Us
Amazon Payment Products
Let Us Help You
EnglishChoose a language for shopping. United StatesChoose a country/region for shopping.
© 1996-2022, Amazon.com, Inc. or its affiliates