You've subscribed to The Legacy Fleet! We will preorder your items within 24 hours of when they become available. When new books are released, we'll charge your default payment method for the lowest price available during the pre-order period.
Update your device or payment method, cancel individual pre-orders or your subscription at
Your Memberships & Subscriptions
There was an error. We were unable to process your subscription due to an error. Please refresh and try again. 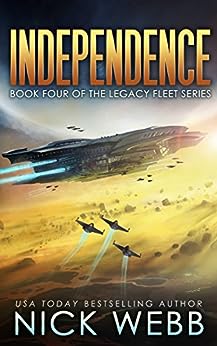 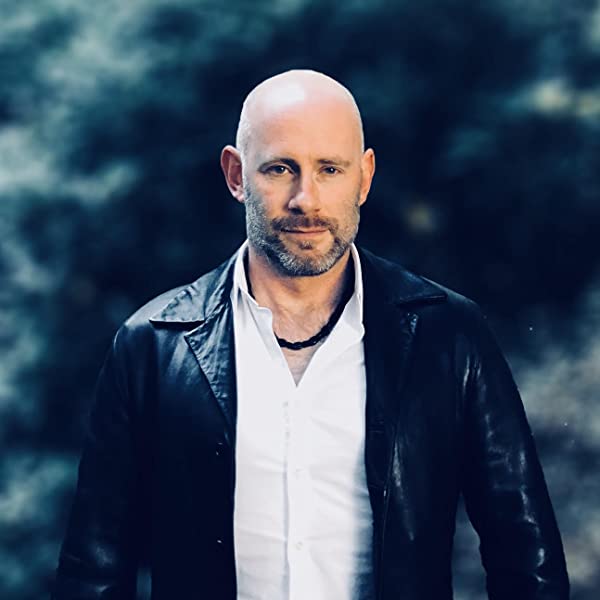 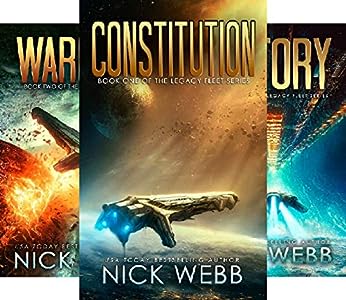 THE EPIC MILITARY SPACE OPERA SERIES CRITICS ARE RAVING ABOUT

4.4 out of 5 stars
4.4 out of 5
845 global ratings
How are ratings calculated?
To calculate the overall star rating and percentage breakdown by star, we don’t use a simple average. Instead, our system considers things like how recent a review is and if the reviewer bought the item on Amazon. It also analyzes reviews to verify trustworthiness.
Top reviews

Sgt Elvis
5.0 out of 5 stars Such a great series
Reviewed in the United States on November 24, 2016
Verified Purchase
I really enjoyed this book. I'll say up front that I'm not really into political intrigue etc but besides that aspect I enjoyed this book. I found the writing to be good with few editing errors. I also like the detail and real science (theoretical of course) that the author provides. The characters draw you in, and develop well. This series has been enjoyable from the start. I would recommend it as a series to anyone who likes a good space opera. I don't mind that they play into one another. It seems many reviewers find that distasteful. I see nothing wrong with writing books with the purpose of creating a series.
Read more
5 people found this helpful
Helpful
Report abuse

Barry
4.0 out of 5 stars Good book with a few issues
Reviewed in the United States on July 15, 2019
Verified Purchase
The start of the book is a bit off putting. One expected a very close continuation to the last series however a lot of time has gone. The author's introduction to this concept definitely leaves a lot to be desired. However once the book picks up steam it becomes enjoyable, which is almost midway in the book. It definitely makes you work for the good parts. I lacks a little of the polish of the other books but I assume it had to be completed in a shorter time frame. There is a person called Qwerty I found that that cheapened the delivery as it broke immersion for me. I was flabbergasted that an author would call a character that maybe it is just me.
Read more
One person found this helpful
Helpful
Report abuse

I waited until I had finished Book 6 in the Series to write any reviews, so you will see this at least four more times and I recommend all 6 books in the Series.

JAK
5.0 out of 5 stars Another good one.
Reviewed in the United States on July 12, 2020
Verified Purchase
This story takes place around 30 years after the previous book in this series. Captain Tim Granger is still, for all intents and purposes, falling into a black hole having just passed the event horizon. His action was a key part of the victory over the Swarm. Humanity has begun a new religion - The Grangerites - where Tim is God's messenger. Admiral Shelby Proctor has been called back to active duty because a new threat. There is also a bit of political unrest as the United Earth government begins to crumble. And so it goes - lots of action, space battles, friends gained and lost. Looking forward to reading the next book in the series.
Read more
Helpful
Report abuse

Phil Morgan
4.0 out of 5 stars Not much about the ISS Independence
Reviewed in the United States on January 14, 2019
Verified Purchase
I liked the space battles and the new alien twist! But, given the name Independence, I expected there to be more descriptive actions from the bridge. This book was more about the political intrigue that had taken root since Tim Granger defeated the Swarm in the last book. Not bad, just not what I expected, since early on, there were hints about the super new technological capabilities of ISS Independence (that were, in my opinion, not sufficiently explored).
Read more
One person found this helpful
Helpful
Report abuse

Gerry
4.0 out of 5 stars New Nick Webb Series Delivers!
Reviewed in the United States on November 2, 2016
Verified Purchase
This new series is a provides a good bridge between familiar favorite characters and a set of new characters (both good guys & villians!). It is 30 years later and Admiral Proctor is back where she belongs, on the deck of a capital ship, and I for one was glad to see that she did have a conscience after all about how she treated good old Tim Grainger when she took command of his baby back in the day. As a fan of Nick Webb's style, a good stew of believable characters and plausible military future tech, I was glad to see a good start to a new trilogy. You are in store for some interesting twists and some thoughtful moments - I am looking forward to Defiance!
Read more
7 people found this helpful
Helpful
Report abuse

Stuart Riley
5.0 out of 5 stars Intriguing science fiction story
Reviewed in the United States on November 24, 2019
Verified Purchase
The story line is about the same as other science and space written by Nick Webb, but this followed the earlier versions of the legacy fleet. The character pick up thirty years after a great battle where alien technology met greed and military forces bent on political gain. Now this book is one that you can’t put down until finished. It’s a very good story worth the time to read, but it leads you to the next book, which carries the main characters into more intriguing story.
Read more
Helpful
Report abuse

Gordon L
5.0 out of 5 stars Excellent lead story for new military SF series. Loved it!
Reviewed in the United States on November 27, 2016
Verified Purchase
I note the rating is 4.6 ! I'd expected no less from Mr Webb! Follows the Legacy Fleet Trilogy. The start of a new series by Mr Webb always a reason to cheer. New unidentified alien threats to Humanity with corrupt and/or stupid politicos and military stirring the pot, You'll find many of the former series characters including former Admiral Procter and "Ballsy" return. Some humor. Fast-moving action both on the space front and political front.
Read more
2 people found this helpful
Helpful
Report abuse
See all reviews

Logos
5.0 out of 5 stars The Perils of Pauline
Reviewed in the United Kingdom on October 14, 2016
Verified Purchase
This book, and the later volumes are a must-buy for fans of gripping, action-packed, and convoluted plots. I very seldom award five stars, but this whole series baffled and excited me, while making me cheer every hard-won victory. My headline is The Perils of Pauline, because the episodic, roller coaster story line reminds me so much of the short film series popular many years ago, in which the heroine is doomed, only to be snatched to safety in the next reel.

The plot defies a synopsis other than 'overwhelming alien forces meet do-or-die hero'. The plot twists, many totally unexpected, produce layer upon layer of development, within a traditional space opera, making a gripping read. At times I paused in order to work out how the latest twist actually worked, because I was sure that...Masterful misdirection, masterful story.
Read more
2 people found this helpful
Report abuse

Kindle Customer
5.0 out of 5 stars Having read and devoured the Legacy Fleet trilogy I thought ...
Reviewed in the United Kingdom on October 14, 2016
Verified Purchase
Having read and devoured the Legacy Fleet trilogy I thought that Nick Webb could not come up with anything to surpass it BUT along came book 1 of the legacy Ship Ship Trilogy which has built on the first Trilogy and has SURPASSED IT with hints as to the fate of Captain Granger are the grangerites right? well only time and Nick Webb know. I personally cannot wait for MORE and hope that even more will follow this trilogy as well. Thank you Mr Webb for keeping me enthralled and wanting more, more, more.
Read more
One person found this helpful
Report abuse

Tai
5.0 out of 5 stars Another great book
Reviewed in the United Kingdom on November 2, 2016
Verified Purchase
This one book where I would right to end and want to read the next and the next. Why the story is solid, there nothing that you get bored easily so the pages keeps turn and soon you regret you finished the book. I would it over again just in case I missed something. Damn I have to wait for Defiance which is coming out soon hmm not soon enough. I hope the wait for the third is not long.
Read more
Report abuse

Alan James Briggs
5.0 out of 5 stars What an excellent Series!
Reviewed in the United Kingdom on January 14, 2019
Verified Purchase
Enjoyed reading the Legacy Fleet - the unfolding story kept me glued to the book until I finished it!
Read more
Report abuse
See all reviews