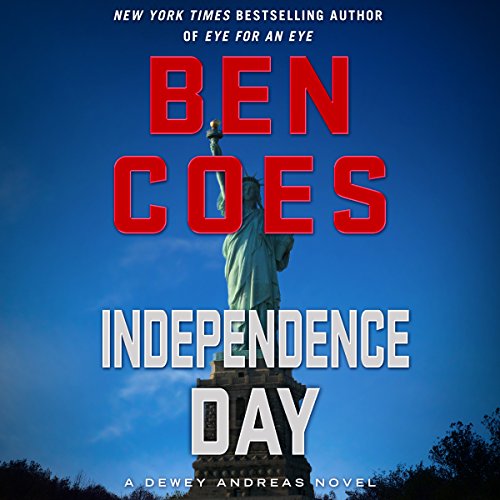 Dewey Andreas, former Delta and current intelligence agent, is sidelined. Still drowning in grief after the tragic murder of his fiancee, Dewey has seemingly lost his focus, his edge, and the confidence of his superiors. A high-level Russian hacker, known only as Cloud, is believed to be behind a series of major terror operations, and the mission is to capture and render Cloud harmless. At the same time, a backup team is sent after the only known associate of Cloud, a ballerina believed to be his girlfriend. Unwilling to sit out the mission as ordered, Dewey defies his superiors and goes rogue, surreptitiously following and tracking the two teams. What should be a pair of simple snatch-and-grab operations goes horribly wrong - both teams are ambushed and wiped out. Only through the unexpected intervention of Dewey is the backup operation salvaged. Cloud's girlfriend reveals a shocking secret - a plot so audacious and deadly that the masterminds behind it would risk anything and kill anybody to prevent its exposure. It's a plot that, in less than three days, will completely remake the world's political landscape and put at risk every single person in the Western world. On the run, with no backup and with only three days left, Dewey Andreas must unravel and stop this plot or see everything destroyed. A plot that goes live on July Fourth - Independence Day.

Special invitation from Audible!
Learn more about Membership
List Price: $31.18
You Save: $3.90 (13%)
By completing your purchase, you agree to Audible’s Conditions Of Use
Sold and delivered by Audible, an Amazon company
Share

4.7 out of 5 stars
4.7 out of 5
873 global ratings
How are ratings calculated?
To calculate the overall star rating and percentage breakdown by star, we don’t use a simple average. Instead, our system considers things like how recent a review is and if the reviewer bought the item on Amazon. It also analyzes reviews to verify trustworthiness.

W. D. Barnum
VINE VOICE
5.0 out of 5 stars The Saga continues
Reviewed in the United States on September 29, 2018
Verified Purchase
This is the fifth book in a series of books that, so far, contains eight books. Read them in chronological order, as the books build upon the prior story lines.

In this novel, a young Russian computer genius has cracked CIA's protection software, and has had free access to all of CIA's data networks. In addition he has acquired an old 1950's era atomic weapon and has plans to take revenge on the USA for the murder of his father and mother. Dewey, is thrust into the middle of this struggle. The plot has enough twists and turns and interesting characters to keep the reader involved.

The books in this series are "fun reading" and not fine literature by any stretch of anybody's imagination. One must suspend all thoughts based in reality as to the amount of punishment the human body can sustain and still function - but, what else would you expect of someone who is just molecule short of being a "Super-hero".

I am now convinced that the author does not know the difference between the words "bring" and "take". There are at least three instances where he uses "bring" when he should have used "take” (pages 5, 274, and 333 in the paperback edition). To explain - "bring” is used when the item being moved is coming to the location of the speaker, "take" is used when the intended final location of the item is elsewhere. This type of error should, in my opinion, be caught in proof reading. This is not a new complaint of mine with this author - see my other reviews of books in this series.

The author has one of the characters in the book use "Channel 16" to place a "Mayday" call, requesting a replacement fuel pump. First off an ocean going vessel such as "Lonely Fisherman" would not be using short range VHF (maximum range 60 miles) for such a transmission, and secondly, the correct transmission would have been "Pan-Pan" not "Mayday for such a call about needing a fuel pump. Since 2007, EPIRBs have been the only legally accepted distress signaling. And the US Coast Guard, along with most of the rest of the world, stopped monitoring anything except EPIRBs on February 1, 2009. This switch away from the old 500 Hz Morse Code channel was part of the changes in the SOLAS (Safety of Life at Sea) regulations - which also discontinued having a full time radio operator monitoring the distress channel. One can debate the changes, but cost efficiency won out over, in my opinion, safety. But, that is a subject for another conversation - but, as far as this book goes - the author should have done a little more research before making this a key turning point in the plot.

At least in this novel the author has stopped trying to describe many different types of handgun, and getting many of the facts wrong, as in the prior novels in this series.

An enjoyable book - just accept it for what it is - fun escapism.
Read more
2 people found this helpful
Helpful
Report abuse

Thomas D. John
5.0 out of 5 stars Simply an awesome book! I couldn't put it down!
Reviewed in the United States on June 1, 2015
Verified Purchase
I loved it! Our story starts with Dewey a distressed and almost broken man. We recall his fiancé was murdered in the last installment of the saga of Dewey Andreas. Our story involves Russian mobsters, hackers, a prima ballerina, Navy Seals, the CIA, and a plot to bomb us on July 4th. Ben Coes ability to weave such an involved plot in such a realistic and plausible way speaks to the fact that as an author, he is really hitting his stride. I literally couldn't put the book down. Coes ranks right up there with the late Tom Clancy and Vince Flynn, as well as Brad Thor in the best of the genre. I couldn't recommend it more.
Read more
15 people found this helpful
Helpful
Report abuse

Andrew C
4.0 out of 5 stars Andreas is awesome
Reviewed in the United States on July 29, 2019
Verified Purchase
I just love this series! The way Coes writes is up there with the best. You really like the characters from Tacoma to Katie to Calibrisi. He also builds up the victims of tragedies so it makes you feel their kids even mire, even minor characters. The secondary characters are intriguing as well as well as the antagonists. The only reason this story didn't get a 5 was that some of the hacking part of the story was hard to follow but it was just a fun and quick read. I thoroughly enjoyed it and love this series!
Read more
Helpful
Report abuse

Michael G Kurilla
4.0 out of 5 stars Dewey goes freelance rogue
Reviewed in the United States on June 23, 2016
Verified Purchase
Independence Day is the latest installment in the Dewey Andreas franchise by Ben Coes. Dewey is still mentally recovering from the prior assassination of his fiancee. After an attempt to bring him back inside the fold is unsuccessful, Dewey is passed over for dealing with a planned nuclear attack on the US by as Russian cyber terrorist with personal vengeance on his mind. Dewey decides to insert himself into the mission anyway and manages to end up as the last man standing as the "official" special forces are taken out by the skilled tactician everyone is after. Dewey's supporting cast play various roles in the final resolution, but Dewey handles his part solo this time out.

Dewey has less of the spy elements this time and sticks mostly to action of various types all taking place in Russia.The Russian hacker is pitted against a US good guy, but CIA independent cyber warrior which unfortunately is largely irrelevant to the mission. As a beach read, this is a tasty morsel that also serves to reinstate Dewey solidly back in his true form.
Read more
Helpful
Report abuse

bigbluedrew
4.0 out of 5 stars Dewey reborn
Reviewed in the United States on September 23, 2015
Verified Purchase
By far the best in the series since the second installment. The action crisp and compelling,Deweys struggle to find peace was compelling. The plot was great and I found it very plausible.No 5 star for me because of two points that nagged at me a bit. The Presidents in the last few novels are just so far from the reality of the men we elect to the office in real life It is hard for me to envision ANY of the last 3 men to hold the office in real life, ever acting so courageously or forcefully. The author projects leaders we all wish we had in the office, not particularly we we have. Second I felt Dewey flitting about Moscow doing untold damage a bit of a stretch. The FSB a leviathan still never really entered the picture despite most of the action taking place in their front yard. But these are nit picking points, if you suspend belief a bit to ignore the poisons politics of our country and incision America as we wish it operated this is a first rate crackling good yarn.
Read more
Helpful
Report abuse

DME
5.0 out of 5 stars Thriller with a few issues
Reviewed in the United States on December 18, 2021
Verified Purchase
I love Ben’s work and am reading them one after another. One of the key requirements of a book like this is to get the details right.
1. A brigadier general can’t be chairman of the joint chiefs
2. The weapons related segments need a good polishing by a knowledgeable armorer.
In general a great read
Read more
Helpful
Report abuse
See all reviews

A. F. Prestwich
4.0 out of 5 stars Another enjoyable read.....
Reviewed in the United Kingdom on July 4, 2015
Verified Purchase
I have now read all the Ben Coes, Dewey Andreas books and enjoyed everyone. They are all your typical highly trained, go to, agent books with the core characters in each book so as you progress you get absorbed into his world. Like all current heroes, he can take one hell of a pasting but manage to shake the pain off in double quick time to get the job done. That is not to diminish any of the books but it is a standard fact with all authors and I wish they would just step back into real time to make it that bit more believable. If you are going to read this book I would suggest you go back to the first by Coes and build up to Independence Day to fully enjoy his writing. Look forward to the next.
Read more
Report abuse

David Wrigley
5.0 out of 5 stars Same book as UK release "A Day to Kill"
Reviewed in the United Kingdom on August 12, 2020
Verified Purchase
Pleased to find a Dewey Andreas book that I hadn't read but on paragraph 2 realised that I had read it as the UK release titled "A Day to Kill"
Given it 5stars good book and not sellers fault but why change the title it's a book set in America cannot see any rationale for it
charity shop will benefit from donation of pristineunread book
Read more
Report abuse

Brian MC
5.0 out of 5 stars Dewey Andreas
Reviewed in the United Kingdom on November 13, 2018
Verified Purchase
The only place to get this novel is from America not available on Kindle. Great novel from Ben Coes
Read more
Report abuse

Simon
5.0 out of 5 stars Didn't disappoint
Reviewed in the United Kingdom on January 11, 2019
Verified Purchase
Bought this as it doesn't seem to be available on the kindle. Didn't disappoint - these are the a brilliant series!
Read more
Report abuse
See all reviews
Back to top
Get to Know Us
Make Money with Us
Amazon Payment Products
Let Us Help You
EnglishChoose a language for shopping. United StatesChoose a country/region for shopping.
© 1996-2022, Amazon.com, Inc. or its affiliates