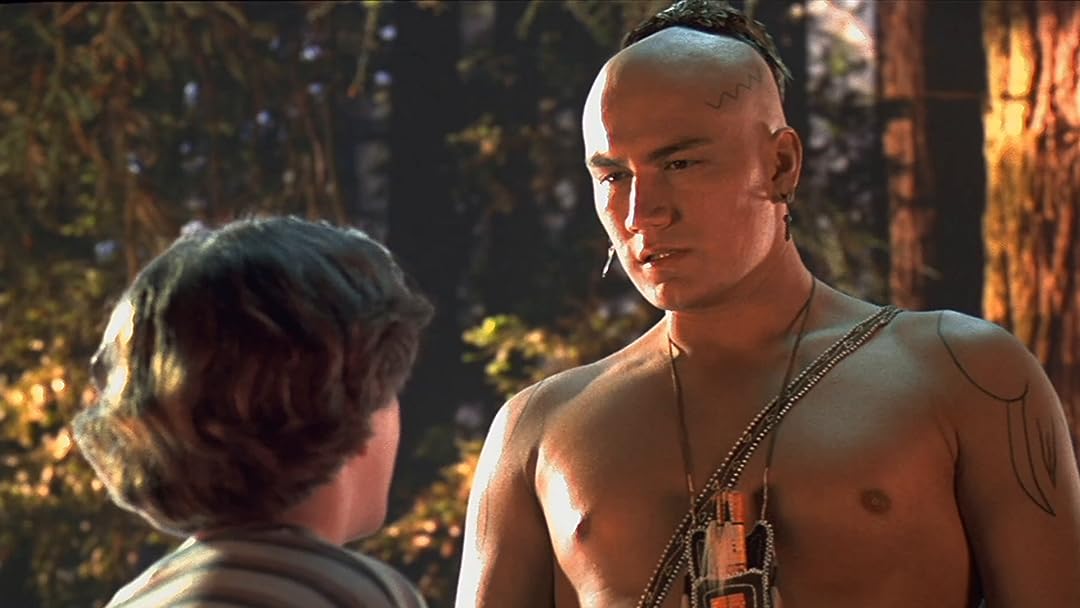 The Indian in the Cupboard

BeachReviewed in the United States on December 31, 2018
1.0 out of 5 stars
Not as kid friendly as you think...
Verified purchase
I loved this book and so did my kids when they were small. Bought the dvd to share with my grandkids. Glad I previewed it. in the middle of this wonderful and imaginative story the two sweet little boys that I was 'rooting for' ended up diving in to some porn for awhile, being completely taken by it. Out of the blue, gratuitous and disgusting!!!! This makes me very angry on behalf of all of our little boys 'out there' as well as the actors who were used to film the scene. We need to take better care of them!! :-( I threw it away.
88 people found this helpful

V. GirardReviewed in the United States on February 27, 2019
3.0 out of 5 stars
Bad language not necessary
Verified purchase
After having read this book as a read aloud we were looking forward to the movie and comparing it to the book. We watched it, but was not happy with the language/swearing that really was not needed to move the story along at all.
18 people found this helpful

apoemReviewed in the United States on July 11, 2018
5.0 out of 5 stars
Great Movie.
Verified purchase
This is a true classic. It was written maybe 25-30 years ago and the movie was made several years after that I believe. This is a family friendly video and a great read along book. It stirs the imagination and teaches some great lessons.

In this story a little boy named Omri who is gifted a cupboard and discovers that when he puts little plastic things in it they come alive. This starts with a little Indian named Little Bear who is an Iroquois. Later Omri's best friend Patrick puts a cowboy (Boone) into the magic cupboard who also comes to life. Omri learns that he can't just have a live human as a toy. He also learns that he has some responsibility for this new found friend of his and also Boone.

The part that is so touching and that makes this movie (and book) so meaningful is that Little Bear is willing to teach Omri. He's angry and frustrated to be where he is (a tiny person in a big world, in a different time period etc). He doesn't just get angry and stay angry though. He uses this as a teaching moment and begins to teach Omri about manhood and responsibility. Omri must help Little Bear with the physical things- food, housing, etc while at the same time Little Bear must teach Omri about growing up.

While Boone and Patrick are a part of this story they are really a side of this story while the bulk of the story centers around Omri and Little Bear. And in fact they are, in some ways, opposite of Little Bear and Omri. Boone is not as able (or willing?) to teach Patrick about his situation. He is also quick to anger and stay angry rather than using that moment to teach. Additionally, it is Omri who must mostly take care of Boone and make the tough decisions even to the point of sending Little Bear and Boone back home.

By todays standards of being worried about offending everyone and avoiding any and all stereotypes this book might never get published and this movie never get made. That would be a shame.

There is a reason that many of us who read this book or watched this movie as a child are bringing it back into our lives for our children is that it is a classic. One of the things that makes a book a classic or a video a classic is that it has life lessons in it. In this case lessons about responsibility, strength of character, growing into adulthood, respect and more. It is more than just an imaginary story about little people or big people taking care of little people- there are plenty of books like that out there. This book is different because it sparks the imagination and it teaches life lessons and that is what keeps bringing people back to this story.

JohnicaReviewed in the United States on June 7, 2021
2.0 out of 5 stars
Why is Hollywood so insistent on sexualizing children?
Verified purchase
We enjoyed the movie generally speaking. But why, WHY, did they throw in a scene with the two boys watching scantily clad women on the TV? The actors were 10 or 11 at the time. Their characters were going through the most amazing adventure of their lives. What is supposed to be imaginative, innocent, and adventurous is interrupted by the exact opposite. Even if you aren't opposed to pornography and women being objectified in principle, perhaps you can agree with the fact that young boys should be encouraged to dream about talking to a girl, holding her hand, perhaps their first kiss, to experience butterflies in their stomachs and curiosity about what makes girls so fascinating, rather than fantasizing about grown women strutting around shaking their thangs in high heels and bikinis. Also the main character says "damn" to his mom and she just smiles at him like an idiot rather than correcting his bad language. It was kind of funny how he said it, but it contributed to it not being a perfectly clean kid movie, imo and fyi.
3 people found this helpful

Street-Cred ReviewerReviewed in the United States on January 2, 2019
5.0 out of 5 stars
Great movie for the family.
Verified purchase
Great movie to watch with my 7,5 and 3 year old. Has a great fantasy story and imagination. There was shooting and death involved, but it was manageable for the young ones to stomach. Very relevant racially and socially.
4 people found this helpful

kooifishReviewed in the United States on August 19, 2018
4.0 out of 5 stars
Fun Movie, Fairly True to the Book
Verified purchase
My daughter and I read all the books in this series and then watched this movie together. It was done pretty well! While the actor who plays Omri is very soft spoken, it does seem to add to his character. We thought that his friend was more annoying / bad in the movie than in the books, but the character was played well also. It would have been fun to see the rest of the books from this series be turned into movies.
One person found this helpful

BronxTeacherReviewed in the United States on June 22, 2013
5.0 out of 5 stars
Great Comparison for the Book
Verified purchase
My fourth graders loved watching this movie. I originally purchased this to have them compare the text elements to the digital version. I know some people have reviewed this movie with concerns about the language. They may not be familiar with the text then-- some included in the text "shut up," "he**," and "stupid." If you are looking for this movie to be part of your curriculum or literary unit, I would still suggest the movie as it is only representing the text and the age of the characters..still appropriate for the home and school, but of course preview any movie for children before viewing. I loved the options of the comic book like captions on the movie. The digital enhancement of Little Bear works well and doesn't look too "old" in terms of effects yet. My kids loved it as an end of the year activity!
One person found this helpful
See all reviews
Back to top
Get to Know Us
Make Money with Us
Amazon Payment Products
Let Us Help You
EnglishChoose a language for shopping. United StatesChoose a country/region for shopping.
© 1996-2022, Amazon.com, Inc. or its affiliates