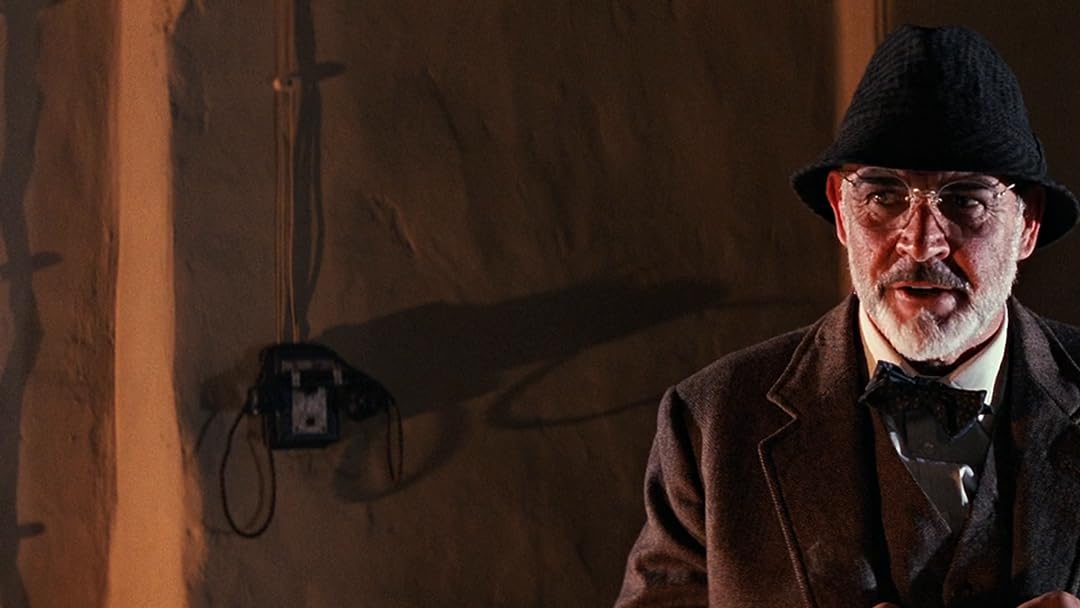 Indiana Jones and the Last Crusade

(3,155)
2 h 6 min1989X-RayHDRUHDPG-13
After settling down to a quieter life, Indiana Jones is thrust back into action when his father mysteriously disappears while on a quest for the Holy Grail. He sets out to rescue his father and ward off menacing old enemies that surface.

Save with with the Indiana Jones movie collection on Prime Video shop now.

Steve ScottReviewed in the United States on February 9, 2017
5.0 out of 5 stars
By far the best Indiana Jones movie
Verified purchase
By far the best Indiana Jones movie, doing everything right with the serial action franchise, nailing every trope while expanding the Indiana universe and at the same time exploring the father/son relationship that made Indy who he is. And all of this is done with humor, deft human insight and incredible action set pieces that actually move the story and characters forward. By giving us an origin story, Spielberg and Lucas have given us the quintessential Indiana Jones movie.
50 people found this helpful

joel wingReviewed in the United States on January 12, 2021
4.0 out of 5 stars
Creates a real sense of excitement and adventure
Verified purchase
The previous Indiana Jones movie the Temple of Doom was a horrible take on an exploitation movie. The Last Crusade got the franchise back on track with Jones (Harrison Ford) re-uniting with his estranged father Henry Jones (Sean Connery) and facing off with the Nazis once again in a search for the Holy Grail.

I really like the start of the film. It has a young Indiana played by River Phoenix. It shows how Indiana got his whip and hat, why he didn’t like snakes and most importantly how he got into archeology. It’s a great bit of background for the entire franchise.

The story itself is played out like a great mystery as Indiana goes through a series of clues to find the Grail. He climbs through crypts, gets chased, etc.

Then when he runs into his father it starts getting comedic as the two play an odd couple.

In the end, The Last Crusade re-creates the sense of excitement and adventure into mythology and history that the original did.
C

Rick JamesReviewed in the United States on December 23, 2018
3.0 out of 5 stars
Not the best and dated
Verified purchase
Am I that old? I guess so! This movie is out of style by today's standards and the special effects are old school--blue screens, latex, etc. I saw it when it was in the theater, thought it was the weakest of the first three at the time and still do. It's outright hokey at times. It's still a fun movie for the family or if you like action movies. What bothers me now is, why pay homage to Nazis in any form even if they're the protagonists? They don't deserve ANY place in what I choose for myself as entertainment. (that's not a factor in my rating) Enjoy the nostalgia or seeing the movie for the first time, but definitely don't start here if you're new to Indiana Jones. Thank you and take care.
6 people found this helpful

AggiemanReviewed in the United States on January 15, 2017
5.0 out of 5 stars
Adventure has a name
Verified purchase
Most of the time when a third movie in a series comes out, it is typically not really that great. Think Godfather III or Alien 3. But with Indiana Jones and the Last Crusade, we get a return to what made the original Raiders of the Lost Ark so great, but with some added growth that ranks this as one of the best such movies ever made.

Returning for this adventure alongside Indiana Jones are his cohorts Sallah (John Rhys-Davies) and Marcus Brody (Denholm Elliot) - sadly no Marion Ravenwood though. We are also introduced to Indy as a teen in the Boy Scouts and learn just where he acquires the hat and the scar on his chin.

Once Harrison Ford returns to the screen, we pick up action in 1938, where Indy is retrieving the cross of Coronado in a great sequence that serves as a bookend to the opening young Indy sequence. After that, Indy later receives a diary from his father (Sean Connery as professor Henry Jones), who has turned up missing while on an expedition in pre-WWII Europe. Indy and Brody meet with Walter Donovan, a US businessman with an apparent interest in the European expedition that Henry Jones was on. Indy and Brody promptly head for Europe, Venice Italy to be precise, to find the missing Jones.

What follows is a well-written movie with some memorable dialogue and characters that resonate. The introduction of Henry Jones was perfectly done. He gives Indiana Jones a human quality that he maybe didn't have quite enough of in the earlier movies - now, instead of a guy who wears a great hat and an even greater coat and carries a bullwhip, and can foil the plans of Nazis and other bad guys as he makes things up as he goes along, he is now a man with a past, a man with a strained relationship with his father, and a man who will grow emotionally as he patches up his relationship with his dad.

Some of the dialogue that stands out to me even so many years later ....

This entry in the series stands up well alongside Raiders of the Lost Ark and is quite a satisfying adventure movie.
One person found this helpful

Smiley on AmazonReviewed in the United States on June 28, 2017
5.0 out of 5 stars
Fun, with a bit of history
Verified purchase
This has all the improbable heroic stunts and rollicking adventure of the first Indiana Jones installment,with the added interest of three (technically three people representing two) generations of well-cast Joneses. It is accented with clever lines and the characters are better developed than in the predecessors, especially in advancing the relationship between Junior and Senior.
11 people found this helpful

PbnfreakReviewed in the United States on February 5, 2018
5.0 out of 5 stars
Excellent; well worth the watch
Verified purchase
Loved the dialogue in this story and great casting of the characters. The characters were very well developed -- way better than the second Indiana Jones movie. The fight scenes were nicely done; but the ending did get a little too supernatural for my taste. Still, I thoroughly enjoyed the story and will definitely watch this one again in the future. The second one...not so much. :D
9 people found this helpful

rikkiReviewed in the United States on July 10, 2022
5.0 out of 5 stars
Hey, it's Indy!
Verified purchase
Not like there's a whole lot of people who don't know who Indiana Jones is, but for those 5 of you, this is a really fun movie, worth you time! The franchise went a little off track with part II, but this final 3rd chapter (Crystal Skull doesn't count) is Indy back at his best once again.

Michael A. LillyReviewed in the United States on January 13, 2019
5.0 out of 5 stars
Family Crusade
Verified purchase
This film also directed by Steven Spielberg, introduces us to the relationship developed by the father, Prof. Henry Jones (Sean Connery) and Henry Jones, Junior also known as Indiana played by River Phoenix and Harrison Ford. This relationship is about them learning about each other when each has no choice but to find the holy grail when forced to by the Nazis.
One person found this helpful
See all reviews
Back to top
Get to Know Us
Make Money with Us
Amazon Payment Products
Let Us Help You
EnglishChoose a language for shopping. United StatesChoose a country/region for shopping.
© 1996-2022, Amazon.com, Inc. or its affiliates