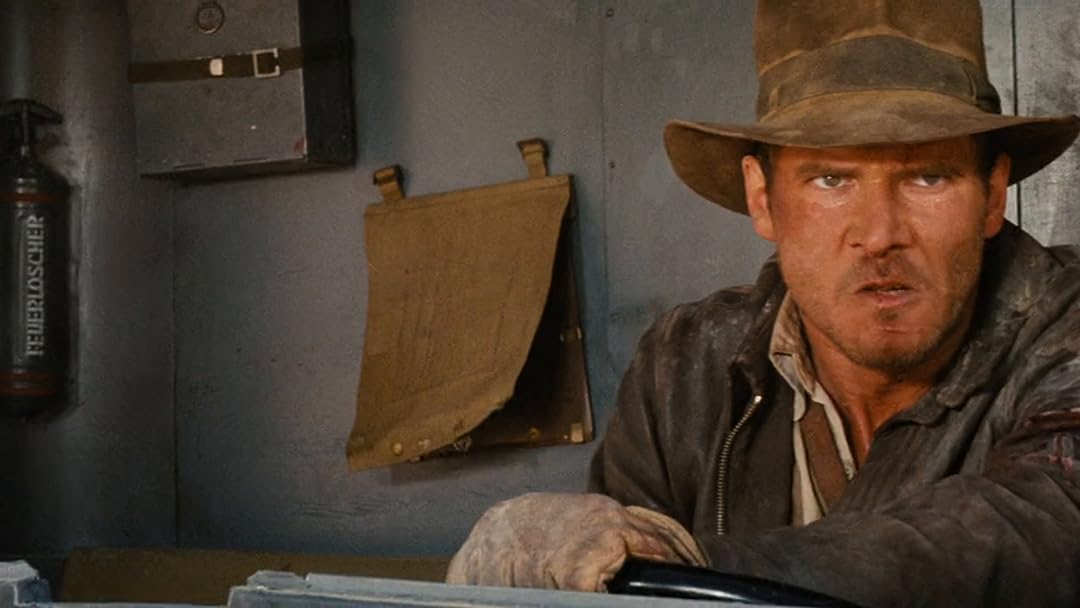 Indiana Jones and the Raiders of the Lost Ark

(7,156)8.41 h 55 min1981X-RayPG
An intrepid archaeologist and adventurer must contend with a group of Nazis in his search for an ancient religious relic that affords the power of world domination. His quest takes him across the globe, with danger at every turn.

Save with with the Indiana Jones movie collection on Prime Video shop now.

Dos CentavosReviewed in the United States on July 7, 2018
5.0 out of 5 stars
defeating malignant forces is good
Verified purchase
I love it when Nazis melt, may they all meet that fate.
38 people found this helpful

Aaron StengelReviewed in the United States on June 9, 2021
2.0 out of 5 stars
You'll need the 2021 box set for the 4k transfer to 1080-disc itself is the 2012 version!
Verified purchase
Buyer Beware! Released the same day as the 2021 box set and has a 2021 copyright date on the packaging, but the disc itself is the exact same disc as is found in the 2012 box set. Completely identical. I even compared the discs and saw the quality is exactly the same. Granted, the new packaging does not exactly state that this is the 4k transfer, but it would be a very easy mistake for fans that don't want to upgrade their whole box set.
10 people found this helpful

joel wingReviewed in the United States on June 19, 2019
5.0 out of 5 stars
Certified Spielberg classic
Verified purchase
Raiders of the Lost Ark was released in 1981 and became an instant classic. It was directed by Steven Spielberg with the story by George Lucas and Philip Kaufman. It included adventure, action, some romance and Nazi Germany. What more could one ask for?

Indiana Jones is an archeology professor who is contacted by U.S. intelligence about the Nazis’ interest in the occult. He deduces that they are looking for the Staff of Ra that will lead them to the Ark of the Covenant which was described in the Book of Exodus in the Bible. It contained the two stone tables of the Ten Commandments that God gave to Moses. The Germans hope to use this ancient artifact in their war effort. Jones accepts the job to find the Ark. That takes him first to Nepal to find Marion, his former lover and the daughter of Professor Ravenwood that worked on ancient Egypt and the staff. That's the first time Jones tangles with Nazi agents that are looking for the same information. Then Jones and Marion go to Egypt to find the Ark.

Right from the beginning of the movie Spielberg sets out that this will be about adventure as Jones tries to take a golden idol in Peru, only to be upset by a series of booby traps that almost kill him. He then runs into an angry native tribe that doesn’t want him to take the idol. Jones barely escapes. This is foreshadowing the adventures that will take place later in the movie as well as the the excitement of the chase for hidden treasure.

Marion is also a good match for Jones because she’s smart, strong, and will put up a fight. When she’s captured by the Nazis in Egypt for example she attempts an escape rather than waiting for Jones to rescue her. She also demanded to go with Jones to Egypt as his partner to find the treasure, again showing her determination and self-will.

There’s also the Nazi element. There were real stories about Hitler’s interest in the occult and archeology to try to find the first Aryan’s of his master race. That might have been the inspiration for Lucas and Kaufman. The ending is a great play upon the mix between those two elements: the Nazis and the occult. Every movie needs a good bad guy and you can’t really get worse foes than Nazi Germany.

Overall Raiders of the Lost Ark is a great action adventure movie. The characters are engaging as well as the story which has plenty of drama to it.
C

Amazon CustomerReviewed in the United States on February 25, 2019
5.0 out of 5 stars
First movie in the Indiana Jones series and believe it is the very best one
Verified purchase
Indiana Jones and The raiders of the Lost Ark is a totally original great action movie like no other before it which is why this first in the series of the Indiana Jones movies is the best in my opinion and I have watched them all and only bought this one in dvd form. It'll have you captivated and intrigued through the entire movie and trust me when I say if you have never seen this movie (and even if you have) just before the end of the movie is a spectacular event that is actually the best part of the entire movie not to say the the rest of the movie isnt spectacular it is but its the last big dramatic event that'll have you a little bit spell bound. I highly recommend this movie it really is something to see and experience. Go ahead go on an adventure you'll never experience before this movie was released.
5 people found this helpful

Jeff RyanReviewed in the United States on December 7, 2018
5.0 out of 5 stars
American 1936 Archaeology professor fights a group of Nazi tomb bandits
Verified purchase
This action yarn was released in 1981 and was done in the style of the short cinema serial "cliff-hangers" of the 1930's and '40's, such as the FLASH GORDON action movie serials starring "Buster" Crabbe. Harrison Ford had already become world-famous in the first two of the original STAR WARS trilogy films when he took on the role of Dr. Indiana Jones, Professor of Archaeology at an Ivy League university. This is the mega-hit film which saved Paramount Studios from bankruptcy.
After returning from an unsuccessful artifact hunt in the Amazon rain forest region of South America, Prof. Indiana Jones has been commissioned by the US Army and War Department to find and obtain the Biblical Ark of the Covenant, which they want because of the Ark's reputed destructiveness as a weapon of war. The Americans want to keep the find out of the hands of Hitler's Germany. The Nazis, with their own mercenary archaeologist, German troops and a sadistic Gestapo agent, are also racing to find the famous Hebrew relic. It's nonstop excitement, intrigue and adventure from start to finish. Look for the action sequence of an army truck briefly dragging Indy by his bullwhip. This is a tribute to a similar scene in John Ford's epic 1940 western "Stagecoach".
3 people found this helpful

Bhatta's ReviewsReviewed in the United States on July 31, 2018
5.0 out of 5 stars
Awesome Movie!
Verified purchase
This movie never gets old ever! I have watched this on big screen on summer of 1981, On VHS tape, On VCD, on DVD, on Blue-Ray and now streaming on Amazon Prime. Streaming quality as just as good as Blu-ray with 5.1 channel audio and excellent quality. This movie ranks in one of the top *must have* movies in your collection. Provides non-stop awesome entertainment does not matter how many times you have watched it in the past every-time it looks new and fresh!

Rating it with five stars!
6 people found this helpful

D. Orr Jr.Reviewed in the United States on June 5, 2018
5.0 out of 5 stars
Doctor Jones, we've heard a lot about you...
Verified purchase
I could gush about this movie forever but I won't I will try to keep it short and sweet! This movies is 80's action adventure at it's best!! The movie that inspired a generation!! This movie is a fun roller coaster ride and Harrison Ford is at his best... well his second best, Last Crusade (IMO) is him at his best Indy, but I digress. I loved this movie as a kid and it stands the test of time, sure there are some effects that are dated but that does not take away from the fun story and the greatness that is Harrison Ford as Indiana Jones!
5 people found this helpful
See all reviews
Back to top
Get to Know Us
Make Money with Us
Amazon Payment Products
Let Us Help You
EnglishChoose a language for shopping. United StatesChoose a country/region for shopping.
© 1996-2021, Amazon.com, Inc. or its affiliates