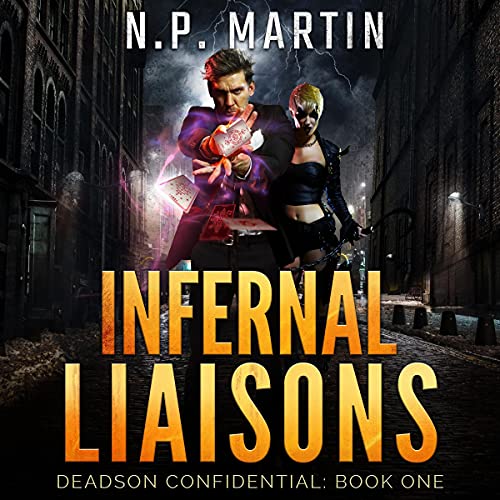 In a world of darkness, the truth will set you free…or get you killed.

Damion Deadson was once a respected newspaper journalist before his sister went missing and his life went to hell. Saved by a demon succubus, Damion now runs Deadson Confidential, a website dedicated to exposing the city’s dark supernatural underbelly.

But with exposure comes danger. An investigation into a demon serial killer has led Damion to a notorious tech billionaire who now wants Damion dead at any cost, and will stop at nothing until Damion and the secrets he holds are buried forever.

While trying to stay alive, Damion also uncovers new information about his sister’s disappearance, and what he learns will lead him down a dark and dangerous path to a murderous cult and the secret players who rule the world. Dark forces are closing in on Damion, and if he is to survive he must use every ounce of wit and courage he has.

Damion always knew the rabbit hole went deep. Now he’s about to find out just how deep as he goes tumbling down into the dark unknown.

Listen to the brand new urban fantasy novel set in the same world as N.P. Martin's Ethan Drake series, chock full of the same action, grit, and dark humor that made the Drake series such a hit with listeners.

Grab your copy of the first book in the Deadson Confidential series today!

John G Robert
3.0 out of 5 stars Dark yet intriguing
Reviewed in the United States on June 14, 2021
Verified Purchase
Dark horror with an investigative journalist partnered with a succubus. This isn't my usual genre and the combination is a bit over the top gruesome with killings and dark sex references. The ending seemed a little contrived and it really isn't a conclusion so much as a lead in for the next novel.
Read more
One person found this helpful
Helpful
Report abuse

C.R.
5.0 out of 5 stars Great start to a new series!
Reviewed in the United States on July 16, 2021
Verified Purchase
I devoured this book when I borrowed it on KU! I just had to buy it to add to my N.P. Martin collection. Damion and his "girlfriend" Zee are great characters, and I can't wait to read more!
Read more
Helpful
Report abuse

PenKay
VINE VOICE
5.0 out of 5 stars Love the new characters; nice to see old ones, too!
Reviewed in the United States on May 6, 2021
Whenever an author I like starts a new series, I’m always a little apprehensive. Will I like it? Will it be a genre I like? Well, I needn’t have worried in the case of this series starter. I was immediately drawn into this book, and it didn’t let me go until the very end. I quite enjoyed learning about Damion, Zelda, Mac, and the other great characters. Add to that, we get to see some characters from a previous series, and one of those I was hella-ecstatic to see! LOL! Let’s not forget the actual plot of the book which was interesting including the subplot about Damion’s sister. With the end of the book making me a little scared we might not see them in the next book, I’m anxious to read it. This one is sure to please this author’s fans. Highly recommend. I was provided a complimentary copy which I voluntarily reviewed.
Read more
Helpful
Report abuse

Natasha
5.0 out of 5 stars Great start to an amazing new series.
Reviewed in the United States on May 11, 2021
Following Mr. Martin’s work for many years, I expected this book to be great. Well, I must say, it exceeded my expectations.

I love the Ethan Drake series, and the new series is set in the same magical universe which makes it feel comfortable and familiar. Once I started reading, I couldn’t put it down, and that says a lot. The story has everything—suspense, non-stop action, unpredictable plot twists, a touch of dark humor and a lot more. And as far as the ending—wow! I am not going to say anything, a spoiler-free review.

I highly recommend it to everyone who loves Urban Fantasy.
Read more
Helpful
Report abuse

Fairycrystal
5.0 out of 5 stars Awesome, Unique First In Series
Reviewed in the United States on May 16, 2021
Deadson Confidential by N.P. Martin is Book 1 in the Deadson Confidential series. The story line is unique and the characters (Damion, Zelda, Mack and the others) are well developed and interesting. This is a well written, fast paced, action packed thrill ride that has it all -- suspend, lots of plot twists, demons, withes, supernatural creatures, magic, and much more. It's a definite page turner that you don't want to put down and do not want it to end. Really looking forward to the next in series. Highly recommended. Received an ARC and this is my voluntary review.
Read more
Helpful
Report abuse

VoraciousReader
5.0 out of 5 stars Expanding the Drakeverse to add the Deadson. Great addition. Five stars.
Reviewed in the United States on May 10, 2021
Great new addition to the Drakeverse! And wait until our old friend the Hellicorn shows up again...this is a bit lighter than the Ethan Drake series but the supernatural bad guys are just as bad as ever. Don't want to give away any spoilers but if you like the Drake series, you will love Deadson!
Read more
Helpful
Report abuse

explorer99
4.0 out of 5 stars Interesting Series Opener
Reviewed in the United States on May 19, 2021
that is set in the same universe as the author's Ethan Drake series. Some of the secondary characters from that series make an appearance here as well. Entertaining read and the stage is set for Damion's continued adventures in book two and beyond.
Read more
Helpful
Report abuse

Steve
5.0 out of 5 stars Wow
Reviewed in the United States on May 7, 2021
This is another one of those that’s right up my street. Demons, witches and magic, what’s not to like. Having read this authors other works I kind of knew what to expect and I wasn’t disappointed. Roll on book two. Highly recommended.
Read more
Helpful
Report abuse
See all reviews

Raven
5.0 out of 5 stars Good humour filled read
Reviewed in the United Kingdom on September 12, 2021
Verified Purchase
I can usually tell if I will like a book by the synopsis.This book called my name so I ordered it and "Death Cult" too.Just finished reading this and it was a great read.Something different ,something darkly humourous.Loved it so much I am now tracking down N.P. Martins' other series "Ethan Drake".Soon a I find them I will be ordering them,that's how much I enjoyed this book.
Read more
Report abuse

Chilipepper
5.0 out of 5 stars Damion Deadson
Reviewed in the United Kingdom on July 14, 2021
Verified Purchase
It's dark, twisted and immersive.
N.P Martin has given us another flawed and troubled 'hero'. This time a reporter with a tragic and messy past and a succubus partner.
This story is not for the weak hearted, hitting the gore hard right from the start..
Read more
Report abuse
See all reviews
Back to top
Get to Know Us
Make Money with Us
Amazon Payment Products
Let Us Help You
EnglishChoose a language for shopping. United StatesChoose a country/region for shopping.
© 1996-2021, Amazon.com, Inc. or its affiliates