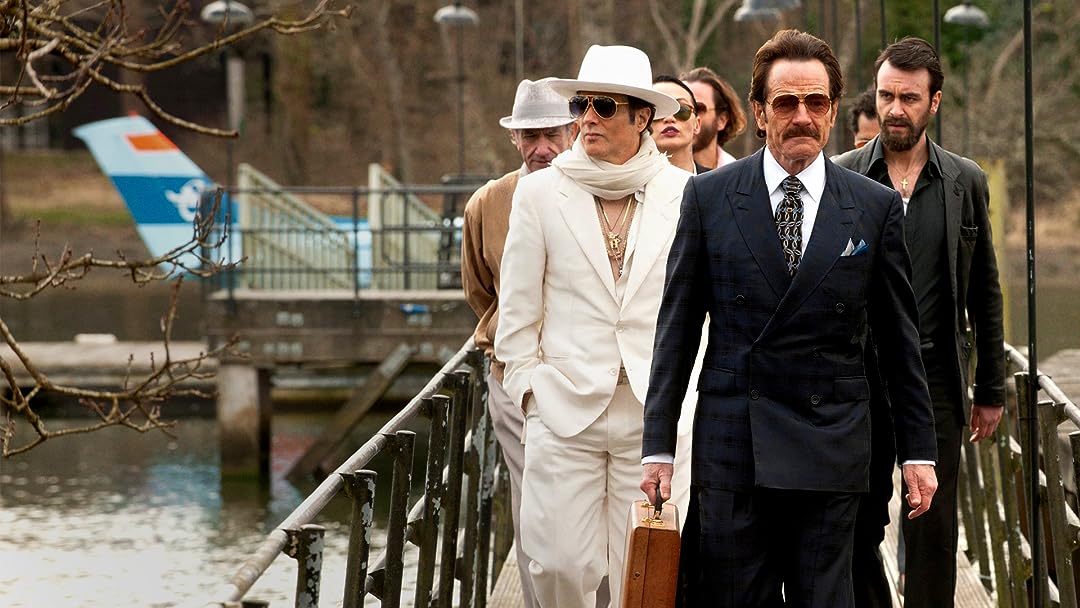 (5,978)
7.02 h 8 min2016X-RayR
Bryan Cranston plays an undercover U.S. Customs agent who infiltrates the globe’s most powerful cartels and takes down the largest drug and money laundering operation in U.S. history.

Dee BrunetteReviewed in the United States on May 22, 2017
5.0 out of 5 stars
It's Cranston..The Cop, Not the Dealer..
Verified purchase
Wow. If you didn't read "Cocaine" or watch "Blow" or follow Don Pablo's biographies and excerpts from the newspapers and coverage of what this man created.. Then you won't understand any of this.. But if you did, then this is a great movie to watch.. And should probably be put into a series showing the other side of Don Pablo's business in the U.S. and London. I was shocked at the ending.. A little less dramatic than it should have been.. But definitely left me waiting to see more of Brian Cranston...and John Leguizamo ((That crazy rican...))) as a team.. They work good together. It's not Breaking Bad, It's "Broke You Bad"... And it's good. It's a good break from the usual stack em shooter movies of late.. Compared to El Sicario... Or It's a little light on violence but it's definitely a good movie.. In my opinion.
48 people found this helpful

♡ Pain Warrior ♡Reviewed in the United States on April 21, 2017
4.0 out of 5 stars
You Can't Go Wrong with Cranston.
Verified purchase
I enjoyed the whole movie. Bryan Cranston is one of the best actors of our time, and all of the characters were very well played by the rest of the cast. From an entertainment standpoint, I liked The Infiltrator from beginning to end, and I love the fact that it's based on a true story. However sensationalized, there were still plenty of specific parts and situations that I know rang true to the real undercover agent. Just like the part with the suitcase: it really happened.
If this movie had different actors in it, I'm positive it wouldn't have been half as good. Bryan Cranston is seriously a respectable leading man. His honesty just shines through clear as day, especially when these very subtle flitters of conflict cross his eyes. He gives enough so that the audience can almost feel his heartbeat, almost hear his intelligent thoughts. But he also gives off a subtlety that makes you believe that he is a trained undercover professional with a job that comes with a high cost, and many genuine sacrifices.
As always, John Leguizamo plays a great off-beat supporting character, with a strong personality. His acting demands attention, and seeing him in movies almost gives off an instant comfort. I also respect Benjamin Bratt and the actor playing his wife was very authentic. Her hairstyle was awesome: it was modelled after one of the First Ladies. Diane Kruger's​ role and Cranston's onscreen wife fit right in, and the woman who played Cranston's relative inlaw was fantastic. It was immediately obvious that she has had many years of acting experience. Although her role was fairly short, it was memorable.

The fashion, wardrobe, and hairstyles were done perfectly, and Cranston got to rock Armani throughout the movie. The real-life undercover agent bought $12,000 suits in the early 70's, to play his rockstar made-up accountant role.
The directing, and pretty much everything else came off as authentic.
And that woman from The Office played the head of the operation, and it was refreshing to see her in such a confident, no-nonsense role after she played an awkward, dorky, but likeable character in The Office TV series for years.
I did get the sense that things were slightly more detached and less personal than they could've been. There were many different characters that were involved, and it seemed like we barely got to know most of them, before we were supposed to feel like they really meant something important to Cranston's character. I suppose things were a bit rushed in that sense. While you're watching it, the pace seems perfect, and I actually enjoyed the fact that there wasn't a lot of terrifically gory or violent scenes or car chases. But it was still obviously high-risk, and that was always apparent beneath the surface, all throughout.

I highly recommend this movie to almost anyone. I feel that everyone can find something to take away from this film, even if it's a better knowledge of some of the drama that went down at the time. Regardless, the golden key lays within Bryan Cranston's astonishing ability to evoke emotion, even with very little movement or words at times. He is phenomenal at what he does, and it's hard to imagine a bad movie or show where he plays the lead.
Definitely worth watching. Overall, there was a lot of work put into this, and it's obvious, but not while looking obvious, know what I mean?

Abigail WolvertonReviewed in the United States on September 8, 2017
3.0 out of 5 stars
Decent film, tired source material
Verified purchase
While this movie does a decent job of maintaining tension, it doesn't really come with much of a payoff, and the film suffers from a particularly weak third act. There are jarring tonal shifts throughout, and the characters are poorly developed. Bryan Cranston is probably the best part of this film, and fans of his work will certainly enjoy watching him in this. Personally, I think the source material is a bit worn out in Hollywood, and at this point I'd rather see a halfway decent documentary on the subject than another so-so dramatization.
24 people found this helpful

BudHeavyReviewed in the United States on November 5, 2017
5.0 out of 5 stars
Great Movie!!!!
Verified purchase
Like others are saying I would like to give this film 4.5 stars. Really good just some parts were a little cheesy but not bad enough to make me dislike the film. Bryan Cranston's scared/nervous run he does while running away from the totaled car is hilarious. I can't be the only one that laughs at that, I remember him running like that a few times in Breaking Bad too. But definitely a good movie. Watch it just to see Bryan Cranston scurry from the wreckage. Too funny.
11 people found this helpful

geotevReviewed in the United States on October 20, 2017
5.0 out of 5 stars
Need More Movies & Shows Like The Infiltrator
Verified purchase
Outstanding! The whole production focused on the personalities and emotions of a high stress/life threatening job that agents go through. However, unlike a lot of movies/shows, the criminals were not glorified or celebrated. The well placed reminders showed the evil and criminal intentions they were up against along with bankers who knowingly facilities these thugs who wouldn't think twice about killing someone. The brave agents who fight these wars everyday for us do this while we go about our daily routines. It's great to see what happened. The writers, the actors, etc. did a great job with this incredible story. We need more movies and shows about actual stories that took place. Thank you!
14 people found this helpful

BobBoylstonReviewed in the United States on February 8, 2020
5.0 out of 5 stars
Great look inside a scandal that persists to this day
Verified purchase
I recommend first watching the movie “The Infilitrator” starring Bryan Cranston. It is available on Amazon Prime Video. Although the movie lacks some historical accuracy, it does provide a clear sense of the danger and intrigue that Mr. Mazur and his team experienced, as described in Robert Mazur’s book, “The Infiltrator: The True Story of One Man Against (sic) the Biggest Drug Cartel in History”. The book has many more intimate details of the operation, but watching the movie first really helped me keep track of the players and understand their personalities. The book gives some interesting background color to Sen. John Kerry’s investigations, as well.

After watching and reading both “Infiltrators”, I realized that Mr. Mazur’s story was just a tiny part of the corruption at BCCI (and BNL, or Banco Nazional del Lavoro). I had lived through those scandals of the Reagan and Bush One administration as a college and law student, but had never gone past reading newspaper and magazine articles and engaging in localized political activism to raise consciousness among fellow voters. So I decided to take a journey back in time and re-read about the BCCI scandal. I subsequently purchased and read, in this recommended order, “The Outlaw Bank” by Jonathan Beatty and S.C. Gwynne and then “A Full Service Bank” by James Ring Adams and Douglas Frantz.

“Outlaw Bank” is a fascinating look inside the ‘Time’ magazine stories that broke the scandal wide open. “Full Service Bank” is often a plagiarism of “Outlaw Bank”, but was ‘written’ later, has additional details, and is a good, albeit hastily written book fraught with typos and grammatical errors. Still valuable, however.

I believe I luckily got the order exactly right: First the movie, then Mazur’s book, then “Outlaw Bank” and finally “Full Service Bank”.

This leads, of course, to the question of which multi-national bank(s) fill(ed) the void left by BCCI’s collapse, and why no president, congress, or Federal Reserve chairman since has had the integrity or will to correct this.
One person found this helpful

TiaReviewed in the United States on April 2, 2017
5.0 out of 5 stars
Brilliant!
Verified purchase
Was desperate for something good to watch and happened upon this by chance. Most Prime movies I'd be interested in I've already seen so was a bit surprised to come across this one that I hadn't heard about before, and shocked it was shut out of all the Oscar buzz and other awards and nominations...it's that good! Better in my opinion than other movies last year that were hyped, and nominated and won. This is the type of gem that you view with no expectations and know nothing about, that grabs you by surprise and unfolds spectacularly.
13 people found this helpful

Madison T. EdwardsReviewed in the United States on July 6, 2017
5.0 out of 5 stars
Awesome Movie
Verified purchase
Bryan Cranston has come a long way from Malcolm in the Middle! I remember wanting to see this in the theaters when it came out - but I never did. So I was excited when I saw that it was available to watch on Amazon! This was a really good movie. It kept my interest, I was on pins and needles most of the movie because I didn't know what was going to happen. The acting was great and it was even cooler that this was based on a book and true events. John Leguizamo is one of my favorite actors and he's so believable in every character that he plays. In this movie he was an edgy, crazy agent that I loved but wasn't sure I could trust. I'm so glad I got to see this, I loved the ending and the summaries of what happened to everyone at the end. Awesome movie!
12 people found this helpful
See all reviews
Back to top
Get to Know Us
Make Money with Us
Amazon Payment Products
Let Us Help You
EnglishChoose a language for shopping. United StatesChoose a country/region for shopping.
© 1996-2021, Amazon.com, Inc. or its affiliates