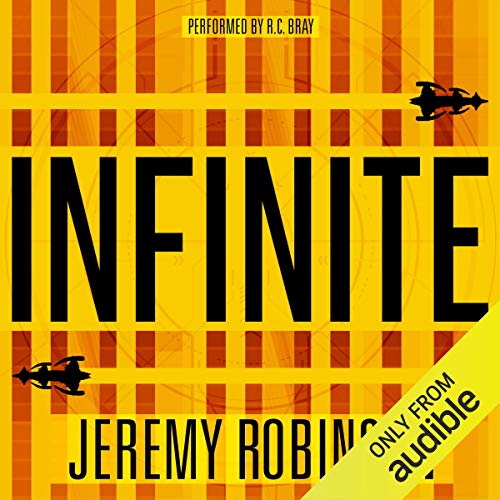 Searching for a new home....

The Galahad, a faster-than-light spacecraft, carries 50 scientists and engineers on a mission to prepare Kepler 452b, Earth's nearest habitable neighbor at 1400 light years away. With Earth no longer habitable and the Mars colony slowly failing, they are humanity's best hope.

After 10 years in a failed cryogenic bed - body asleep, mind awake - William Chanokh's torture comes to an end as the fog clears, the hatch opens, and his friend and fellow hacker, Tom, greets him...by stabbing a screwdriver into his heart. This is the first time William dies.

It is not the last.

When he wakes from death, William discovers that all but one crew member - Capria Dixon - is either dead at Tom's hands, or has escaped to the surface of Kepler 452b. This dire situation is made worse when Tom attacks again - and is killed. Driven mad by a rare reaction to extended cryo-sleep, Tom hacked the Galahad's navigation system and locked the ship on a faster-than-light journey through the universe, destination: nowhere. Ever.

Mysteriously immortal, William is taken on a journey with no end, where he encounters solitary desperation, strange and violent lifeforms, a forbidden love, and the nature of reality itself.

...he discovers the infinite.

Jeremy Robinson, the master of fast-paced and highly original stories seamlessly blending elements of horror, science fiction, and thrillers, tackles his most ambitious subject matter to date: reality itself. An amalgam of the works of J.J. Abrams and Ridley Scott, Infinite is a bold science fiction novel exploring the vastness of space and a man's desire to exist, find love, and alter the course of his life.

Your audiobook is waiting!
Learn more about membership
List Price: $24.95
You Save: $6.96 (28%)
By completing your purchase, you agree to Audible’s Conditions Of Use
Sold and delivered by Audible, an Amazon company

Amazon Customer
5.0 out of 5 stars Mind Blowing!
Reviewed in the United States on June 18, 2019
Verified Purchase
With Infinite Jeremy Robinson has crafted a story that is nothing short of a masterpiece. It's such a wild ride I don't even know where to begin. The story is absolutely amazing. Somehow Robinson managed to borrow concepts from half a dozen genres/movies/books and meld them into an absolutely mind blowing adventure. As soon as you think you're safe and that you have a handle on the story, the ground beneath your feet will shift, like being caught in a massive earthquake, and the entire vector of the story shifts. At various points the story reminded me of The Martian, Passengers, Terminator, 2001, Off to be the Wizard, Alien, Inception, and more. I'm truly in awe that Robinson was able to bring all of that together in a thrilling and completely engaging and captivating story. This is a book I will continue to think about for a long time to come, and have no doubt I will be listening to this one again and again in the future. Definitely one of the best sci-fi books I've ever experienced.
Read more
53 people found this helpful
Helpful
Report abuse

Christopher R.
5.0 out of 5 stars Wow!
Reviewed in the United States on October 24, 2020
Verified Purchase
What a great book! Everything is top notch from the characters and plot. Captured my attention from the first chapter and then I couldn't stop. Plenty of twists and turns, and the ending is phenomenal. Really hope there will be a sequel. If you're into scifi, tech and looking fore a great read....you're search is over!
Read more
47 people found this helpful
Helpful
Report abuse

Amazon Customer
5.0 out of 5 stars Intriguing
Reviewed in the United States on July 10, 2019
Verified Purchase
Loved it! Absolutely loved it! At first the concept seemed only slightly interesting when I read the description, but I have to say that I was wrong. I was hooked early on and couldn’t stop reading, even sneaking away at work to find out what was going to happen next haha. Infinite is a book that makes you think, like really makes you stop at times and ponder life, the universe, and what it all means. I have loved every Jeremy Robinson book I’ve read so far, and Infinite is no exception. Get this book today!!
Read more
47 people found this helpful
Helpful
Report abuse

J. Albright
5.0 out of 5 stars Respect the hell out of this
Reviewed in the United States on August 31, 2019
Verified Purchase
I imagine this novel was not easy to write nor have someone review. If I have read any fiction with heart this the one I would have to say had the most. Not too many fiction books invoke thought from me like this, but this one did a great job at it. I absolutely loved the theme and plot of this book.

I will think about the protagonist in this book throughout the rest of my life and I don't know how I could not love this book anymore. Good on you Jeremy.
Read more
46 people found this helpful
Helpful
Report abuse

Donald T.
5.0 out of 5 stars A large departure for Robinson, but one of his best novels to date.
Reviewed in the United States on June 9, 2017
Verified Purchase
“Infinite” is a science fiction novel by Jeremy Robinson. In it, William wakes up from years at faster than light travel to discover that one of his fellow crew members woke up early, went crazy from the cryosleep, and murdered almost everyone else on board. The only reason that William himself is not dead is because (without his knowledge or consent) he has been genetically modified to be made immortal. So now alone and streaking through space at the speed of light William must ponder his purpose, the nature of loneliness, and the very meaning of life and what constitutes it. Is there a “real” reality, or is reality merely whatever our perception of it is?

Compared to the majority of Robinson’s catalog, this novel is a large departure – both in style and content. “Infinite” is the 38th novel I’ve read from Robinson, so I feel pretty qualified in making an honest assessment of the book. Robinson typically is an action / adventure guy. His novels are usually filled with exciting chases and battles, mutated monsters, and edge of your seat action. There are exceptions of course, but for the majority, this is his typical formula. And he’s good at it. Robinson has delivered, time and time again, books that provide big enjoyment worthy of becoming summer blockbuster movies. If there was an area where his catalog was lacking it was probably in the deeper more thoughtful and introspective novels. He helps fill that void with “Infinite”. In this one Robinson shows a deftness in the way he handles both William’s own thoughts and feelings, as well as his relationship with Gal and Capria.

To be honest, I was unsure of my feelings on this one for much of the book. It’s starts slowly (particularly for a Robinson novel) and then seems to split off in several different directions as the story continues. Three quarters of the way through the book, I was feeling like Robinson had tried to include too many plot lines into one book because certain aspects of the story seemed forced. But then, I finished the book. And Robinson reminded me why he’s the author and I’m just a reader. The twist towards the end of the story was so good and it was there all the time and I didn’t pick up on it. He not only uses the twist to surprise, but to also tie in all of the other elements of the story that seemed a little out of place before. Suddenly everything in the book made perfect sense. It was very much like an “Ender’s Game” moment as you realize that all of the clues where right there and you were so caught up in the story that you missed them.

This is not just a great science fiction story, I could make the argument that it is one of Robinson’s best novels to date.
Read more
58 people found this helpful
Helpful
Report abuse
See all reviews

Paul Bailey
3.0 out of 5 stars I thoroughly enjoyed the audiobook, but…
Reviewed in the United Kingdom on January 20, 2022
Verified Purchase
If the story appeals, I recommend you listen to it on Audible. I had a fantastic time listening to the story, and was fully engaged through even the crazy sections. However, my partner (with whom I share the same love for the same sort of books, normally) really did not like it, and pointed out various passages that read quite immaturely. It seems Goodreads agrees with us… most of the positive reviews were from audiobook listeners, And most of the negative reviews were from book readers. And unusual example… I’ve never come across this phenomenon before!
Read more
One person found this helpful
Report abuse

Kindle Customer
5.0 out of 5 stars a good story with a great narrator R.C.Bray
Reviewed in Germany on January 1, 2022
Verified Purchase
When you read the description you expect not much action and maybe a lot of introspection. But it was much more and never boring. Read it!
Read more
Report abuse

Kindle Customer
5.0 out of 5 stars Loved it, loved it, loved it
Reviewed in Canada on November 8, 2021
Verified Purchase
Nicely twisted sci-fi-horror-romance right out of Rick and Morty. Raises interesting questions about the nature of reality and love. Do you like Sci fi? Yes? Then you will like this book. Read.
Read more
Report abuse

JBVC
5.0 out of 5 stars A True Space Odyssey!
Reviewed in Canada on March 19, 2021
Verified Purchase
This was a metric tonne of fun! Had an episodic feel (in the best possible way). A true epic adventure!
Read more
Report abuse

Kevin Pearce
5.0 out of 5 stars A really thought provoking excellent book
Reviewed in Canada on July 20, 2017
Verified Purchase
Jeremy delves into sci-fi and is well suited to the task. A book that really asks what it means to be human when faced with impossible odds. Great read.
Read more
One person found this helpful
Report abuse
See all reviews