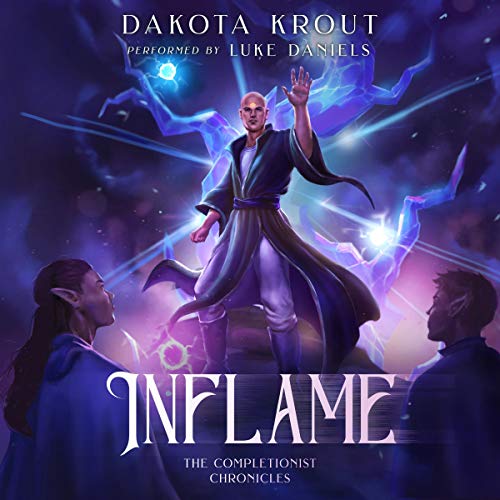 4.6 out of 5 stars
4.6 out of 5
1,444 global ratings
How are ratings calculated?
To calculate the overall star rating and percentage breakdown by star, we don’t use a simple average. Instead, our system considers things like how recent a review is and if the reviewer bought the item on Amazon. It also analyzes reviews to verify trustworthiness.
Top reviews

Jessie
3.0 out of 5 stars Buttery and salty goodness! Just like popcorn! However, just like popcorn… Ultimately unfulfilling
Reviewed in the United States on April 1, 2021
Verified Purchase
I really like this series. I really like the concept. I really like the characters. However, this specific edition seems more like a side story. Or a standalone adventure. Joe heads to the new realm and proceeds to do his normal thing… Make Frenemies… Find the honest way to get the simplest thing done… And just called chaos… However, there’s absolutely minimal character growth, and most of our favorites from previous novels aren’t even here.
Read more
26 people found this helpful
Helpful
Report abuse

Yuri
3.0 out of 5 stars I am conflicted on this one
Reviewed in the United States on April 1, 2021
Verified Purchase
New Joe book! Yay! I love this series and have greatly enjoyed the main character and the hijinks he gets into. It always feels like a fun good time, with some very witty quips here and there and a strong feeling of growing power.

And this holds sorta true for this new story. We follow Joe into this new realm, where he has to join either dwarves or elves to continue growing his character. After he makes his choice, he gets on with getting on, but is constantly sidetracked by requirements for this new faction. All this ends up meaning that Joe just got a lot stronger in very significant ways, but the way the story flows and reads, it just doesn't feel like it.

It's almost like Dakota is on purpose distracting us at every gain to make it look smaller than it is, but the whole evolution of Joe's crafting based on the ending of the previous book is almost too powerful when you really look at it. But Joe is constantly being pulled one way or another and never gets to really DO anything with all this crafting setup. Maybe this obfuscation is deliberate to make the next book feel stronger, I don't know.

All I know is that I can go back to Raze or Ruthless or Regicide and re-read 2-3 different favorite sections/chapters but I am struggling to find 1 segment in this new story that I would want to do that with.
Read more
18 people found this helpful
Helpful
Report abuse

Michael Parnell
5.0 out of 5 stars Fantastic novel!
Reviewed in the United States on March 30, 2021
Verified Purchase
As always, a fantastic book from the Kroutmeister! If you haven’t read the rest of his books, you’re missing out on real gems. This is series is probably my favorite of his books, but they are all fantastic (and I have read them).

In inflamed, he does a good job explaining introducing an entirely new world and culture, while still creating meaningful story. It felt a hair too short, but that’s probably because I want to see where the story goes.

Richard White
5.0 out of 5 stars Very enjoyable read
Reviewed in the United States on March 30, 2021
Verified Purchase
I enjoyed this installment in The Completionist immensely. This is a nice change of pace, but a continued improvement on the Ritual Architect and associated skills and systems. I blitzed through the book and enjoyed every moment of it. I can't wait for the next one.
Read more
6 people found this helpful
Helpful
Report abuse

Kindle Customer
5.0 out of 5 stars Classic, with a side of, eh?
Reviewed in the United States on April 7, 2021
Verified Purchase
I spend the whole book slightly confused, anticipating and expecting Joe to be as smart as the average noob. However even though he forgets to use like 80% of past benefits and powers and gear, and there's way too much confusing nonsensical explanation that even when comprehensible is contradicted in the next ritual, there's just enough fast action and new powers and power players that it still just barely falls on the side of good fun. This was probably my least favorite of this series. I feel like the garbage from the Artorian annex rolled on in and made a messy. Oh well, fingers crossed its just the bad influence of coauthors. Remember who you are Dakota! Powers and humor are a couple of the things I love about his writing. The exposition nonsense is tolerated.
Read more
3 people found this helpful
Helpful
Report abuse

Rachael
3.0 out of 5 stars Not as good as the other books
Reviewed in the United States on May 15, 2021
Verified Purchase
This series has been excellent, however this book is a lower caliber than the others. It often gets lost in the technicality of things without adding much or anything to the story. There's a fine line of giving enough information about Joe's skills that engages the reader, but not so much that we're bored by it. I get it, it's a tough balance and i don't blame the author.

The majority of this book just felt like a grind to read, but i didn't think it was bad. I would just find my mind wandering or my eyes unintentionally skipping ahead several paragraphs to get past the technical parts frequently.

I think another aspect that made the book less interesting was the supporting characters. They were a bit two dimensional with no real development or involvement. It felt less personal because of it. It kind of sucks because after the last book where Joe gets banned from Midgard, the author had to essentially start from scratch with everything, including supporting characters, so we lost a lot of the relationships built in the previous books but also got no real development for many of the new characters introduced. I think McPoundy was by far the most realistic character introduced and he was in only 3 scenes.

Any ways, starting in the new zone you basically see Joe start from scratch with a new reductionist class, but beyond learning how to use it, some characteristic training, and a new weapon, there are no other improvements we see in Joe. So just left feeling unsatisfied, but that's ok. I still think the author had to start somewhere and did the best he could with what he had left over.
Read more
One person found this helpful
Helpful
Report abuse
See all reviews

Dawn Nettleton
5.0 out of 5 stars Another bizarre adventure
Reviewed in the United Kingdom on March 31, 2021
Verified Purchase
This is the strangest story of joe so far and I loved every page of it. This story introduces soo many options for joe and the wanderers that when they get there they are going to have a blast waging war against the elves if they follow joe. The new characters are interesting and more insane than you would believe.
Read more
2 people found this helpful
Report abuse

Amazon Customer
5.0 out of 5 stars Nice book
Reviewed in the United Kingdom on March 31, 2021
Verified Purchase
Nice story. Has quite a few misdirections near the end. I loved it and would gladly read it again. Can’t wait to see what happens next with joe. Though I do hope for a true crossover with the other books. The small name drops were good but can’t help but wonder how Joe will react when he meets you know who.
Read more
One person found this helpful
Report abuse

Ian m
5.0 out of 5 stars A welcome escape
Reviewed in the United Kingdom on March 31, 2021
Verified Purchase
The sheer joy of reading Joe's adventures hasn't dimmed. Whilst Joe's life is a living hell, it's one I'd love to live in
Read more
One person found this helpful
Report abuse

Gruzenburg
5.0 out of 5 stars Very inventive and fun
Reviewed in the United Kingdom on April 1, 2021
Verified Purchase
Of this series this is the most chaotic, enjoyable and enthralling of them all. The shear elan and enthusiasm of this book is wonderful. The mechanics are hard to follow but go along for the ride - you won't be able to stop reading and will have a great time.
Read more
Report abuse

Peekay1982
5.0 out of 5 stars Absolutely brilliant.
Reviewed in the United Kingdom on April 7, 2021
Verified Purchase
This series just keeps continuing to get better. I’m loving sticking so closely to Joe and his progress and I really hope he gets his downtime.
Read more
Report abuse
See all reviews
Back to top
Get to Know Us
Make Money with Us
Amazon Payment Products
Let Us Help You
EnglishChoose a language for shopping. United StatesChoose a country/region for shopping.
© 1996-2021, Amazon.com, Inc. or its affiliates