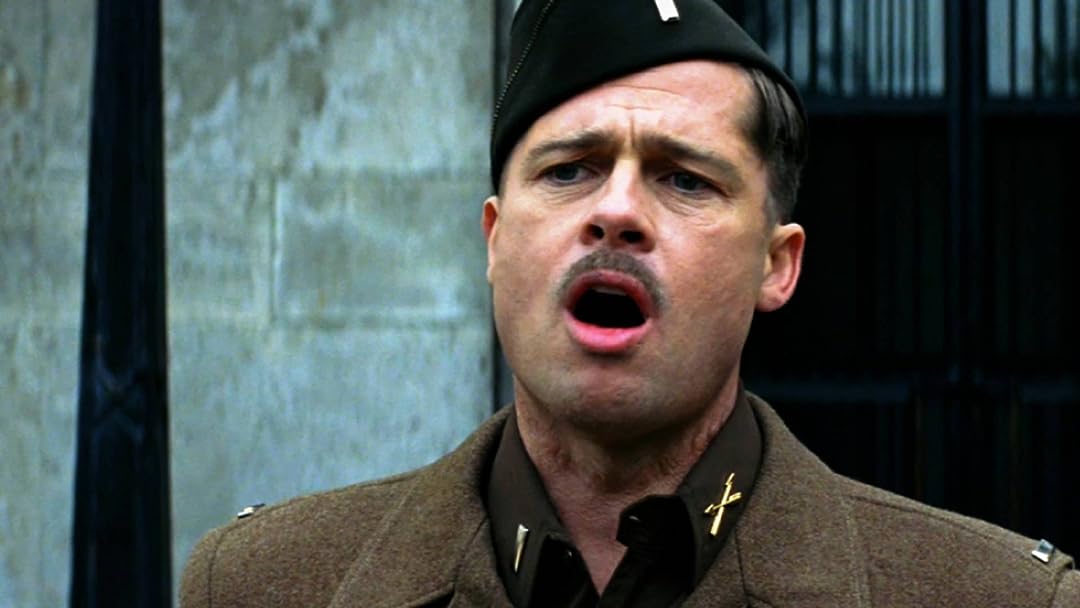 (14,235)
8.32 h 33 min2009X-RayR
In Nazi-occupied France during World War II, a group of Jewish-American soldiers known as "The Basterds" are chosen specifically to spread fear throughout the Third Reich by scalping and brutally killing Nazis. The Basterds soon cross paths with a French-Jewish teenage girl who runs a movie theater in Paris which is targeted by the soldiers.

J C. NowlinReviewed in the United States on July 24, 2019
1.0 out of 5 stars
nuh numbing...
Verified purchase
I'm losing IQ points trying to "get" the reason why anyone would want to make this movie. Gratuitous graphic violence? and demeaning to women??..."you two girls go inside while Daddy talks to the bad man" "I'm a man and everyone knows I am smarter than any bitch so I don't have to shoot her in the back running away.". "I'm a man in charge of a bunch of men who scalp people and that makes me smarter than any woman in France". "My deep southern accent must make me sound the dumbest cluck in the coop". Thus demeaning any southerner because they have a distinct accent...Too bad the leader wasn't from Brooklyn. Then he would ahve been thought of as much smarter. YES Rebecca I understand satire...this is just a BAD movie IMHO
57 people found this helpful

John M. DanielskiReviewed in the United States on November 19, 2020
1.0 out of 5 stars
Hogan's Heroes as Written by the Marquis de Sade
Verified purchase
Who knew Hitler was actually a comic tyrant? Who knew that soldiers respond well to a hillbilly officer speechifying about all the horrid things he will do to the Nazi's instead of speaking softly and carrying a big stick? Who knew that Nazi's were fundamentally stupid and somehow managed to overrun Europe in spite of their ineptitude? Who knew that brutally murdering captured prisoners is actually a lot of fun? Who knew that the Geneva Convention was for chumps? This movie tries to be both an adventure story and a comedy but succeeds only in showing that Taranto's knowledge of real war could fit into the left nostril of a bee. If you are the kind person who could find amusement in a recounting of Jack the Ripper's murders, then this is a movie for you. Brad Pitt is way too old for his part; arguably the only first lieutenant in the history of the US Army who looks like he will soon be collectinng Social Security. This movie is like a old Road Runner cartoon where the Road Runner is possessed by the Spirit of Batman's Joker and is actually much the same as Wily Cayote, just a little smarter.
19 people found this helpful

Ben SweeneyReviewed in the United States on February 14, 2019
4.0 out of 5 stars
Enjoyable
Verified purchase
As far as the product itself, it is excellent. New and sealed. The 4-star rating is for a review of the movie itself.

Inglorious Bastards is directed by Quentin Tarantino and stars Brad Pitt as the leader of the Bastards. This movie is a sort of action comedy that is based during the time of World War 2. The Bastards are a group of people out to kill and many Nazis as they can. The basic plot is that there is going to be a big movie premiere at a theatre in France. The goal of the Bastards is to bomb the theatre because there will be high ranking Nazis in attendance. This movie is lots of fun and very enjoyable. There are a lot of subtitles but if you don’t mind the reading...
I feel like the movie struggles with some pacing as it can be slow at times but overall this movie is very funny. Brad Pitt is fantastic in his role and he is hysterical. I would defiantly recommend this movie and it is a must see for any fans of graphic comedy.

The film has two stories that converge at the end. The first is about Shoshana who has her family killed by Colonel Hans Landa. She later ends up running a movie theater in Paris that gets picked for a special viewing of a Nazi war film which Hitler will attend. The second part is about Aldo Rain and his Basterds. They along with Hilcox are sent to kill Hitler. That’s why it is a fantasy film because it gets to portray the murder of Hitler and the top Nazis.

Like the best Tarantino movies he features great dialogue with action. That’s shown in the opening scene with Landa at the farm. He holds a long conversation with the farm owner where he talks about his job of hunting down Jews. Tarantino then shows flashes of the family underneath the kitchen where Landa and the owner are talking. The longer Landa talks the more nervous the owner gets, and he eventually breaks down and betrays his friends and they’re killed. Tarantino establishes Landa’s cold blooded nature and the horrors of the Nazis.

For the film nerds there’s plenty to see like Tarantino’s previous movies. For instance, there’s a scene where Raine, Hicox and von Hammersmark run into an SS officer in a pub that is based upon a segment from the 1968 movie Where Eagles Dare featuring Richard Burton and Clint Eastwood. He also borrowed from his own films breaking up Basterds into chapters and yellow titles for some of the main characters like the two Kill Bills. Another Tarantino trademark that’s included is the great selection of music used at timely intervals to accentuate the story.

Overall, Basterds is one of Tarantino’s great movies. The characters are engaging. The dialogue and main scenes stand out. The fantasy ending is fantastic.
C

PasticheReviewed in the United States on August 28, 2018
1.0 out of 5 stars
I Agreed with the Critics
Verified purchase
Remembering all the positive press it received upon its release, I watched this movie recently. Afterward, I looked up the reviews because I could not understand what the hype was about. I agreed with the critics--really no substance at all.
34 people found this helpful

JOHN SMITHReviewed in the United States on November 30, 2020
1.0 out of 5 stars
Glad I only wasted time instead of money on this...
Verified purchase
So, apparently, scalping people is entertainment if they are Nazis. The "heroes" of the story seem more like terrorists to me. If Tarantino was going for black humor it fell flat. His "revenge fantasy" was basically a 2 hr gory cartoon. There really isn't any character development. Why are the members of the IB squad so bloodthirsty? Who knows? Tarantino would seem to think its enough that they are Jewish to make their behavior plausible. That's just lazy story telling in my opinion.
As of 11-30-20, there are 7099 reviews with 83% 5 star & 10% 4 star! And, reading through the negative reviews, it seems like half were complaining about how the film was delivered rather than the content / quality of the movie itself. So, it seems clear that a lot of people liked this movie for reasons that have escaped me.
9 people found this helpful

Avid readerReviewed in the United States on November 25, 2020
3.0 out of 5 stars
Over rated
Verified purchase
The production quality was very good, and the script was well done. But what was the intent of the movie? At the beginning, one has Col. Hans Landa (Christopher Waltz) as the Jew hunter, and his portrayal was perhaps the best of the movie. He was extremely good at what he did, which of course was horrific. He knew there were probably Jews being hidden in the farm house, and the only person who was able to crawl out and escape plays an important part later in the film. Brad Pitt, who plays Aldo Raine (Apache) leads a group of Jewish-Americans who are after Nazi scalps, and they are very good at what they do. His leadership in doing what he did could have made for a very interesting movie, although very gory, and perhaps in the Peckinpah mode. Instead, the movie then focuses more on a small group of the Americans who infiltrate to try and kill a large group of Nazis at a movie theater. This slows the action down considerably, and they again come across Col. Landa. There are some over the top performances, for comic relief, I suspect. This movie could have been much better if they knew what they wanted to present for the movie. It left me disappointed, as it is a very long movie.
5 people found this helpful

Arthur H. RoachReviewed in the United States on August 21, 2016
5.0 out of 5 stars
World War II with a bit of a smile
Verified purchase
It's a classic, but I'm seeing it for the first time. Edge of your seat, white-knuckle excitement as the story progresses. As clever as "Spy vs Spy" in Mad Magazine, one side always one-upping the other. Brad Pitt dominates whenever he's on screen, an over-the-top no-holds-barred American on a mission to take out as many Nazis as possible, but in order to demoralize them, to do so with as much visible pain and suffering as possible. Two plots almost unwittingly converge for an explosive finale. Take nothing for granted!
32 people found this helpful
See all reviews
Back to top
Get to Know Us
Make Money with Us
Amazon Payment Products
Let Us Help You
EnglishChoose a language for shopping. United StatesChoose a country/region for shopping.
© 1996-2021, Amazon.com, Inc. or its affiliates