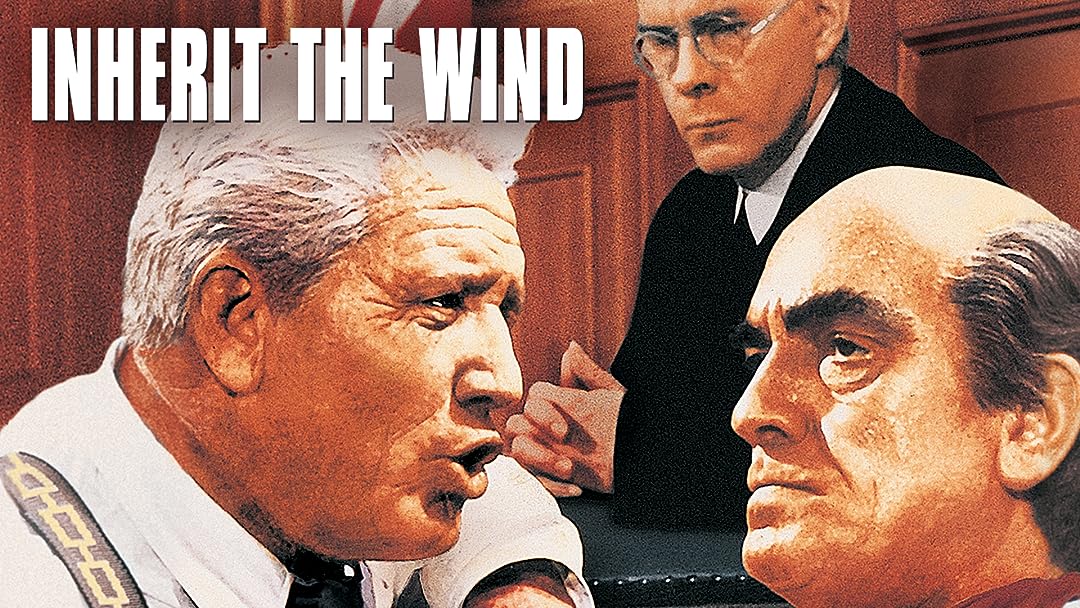 (1,264)
2 h 7 min19607+
Spencer Tracy and Frederic March go head-to-head as opposing attorneys in this blistering courtroom drama about the famed "Scopes Monkey Trial" where a Tennessee teacher must defend himself for teaching Darwinism.

clutchhitterReviewed in the United States on September 17, 2018
3.0 out of 5 stars
ONE STAR for AWFUL audio commentary (5 Stars for the Movie, 4 Stars for the Transfer)
Verified purchase
There is no reason to buy this version since the ONLY true extra is the awful, rambling, dull Wikipedia-level audio commentary. (Trailers don't count.)

An audio commentary is supposed to be commenting upon what's happening on-the screen at THAT moment. This dude goes off on rambling tangents about the history of the three main actors, defending the director (we don't need this defense, we love the movie) and offers absolutely NOTHING new that lovers of the film don't already know. It is supposed to be supplemental to what you are watching and not get in the way.

I got the feeling he was improvising, because at one point he says, when Gene Kelly appears...oh here's this character....what's his name??? (I kid you not),

People who love this movie can rattle off the name E.K. Hornbeck in an instant, and this guy had to think about it??? On the track???

Audio commentaries should be experts in film or technique who can point out things the ordinary viewer should look for. For example Roger Ebert and Peter Bogdonavich's tracks on "Citizen Kane" (although Ebert did a lot more homework than Bogdonavich.)

This guy presents biographies of all the actors, including supporting actors, totally ignoring what's on screen, it could have been a commentary on any movie.

Here's some of the useless trivial nonsense this guy manages to work in:

Sherriff Lobo...spinoffs
M*A*S*H (ok, but also talking about After M*A*S*H???)
Donald Trump, etc.
Spencer Tracey's wife was an active fundraiser
He had an affair with Loretta Young.

Additionally, this commentator shows little knowledge beyond what lovers of this movie already know. You love a movie, you Google everything you can about it....but a commentator should be providing insights you can't read on-line and not recycling Hollywood stories we all know.

A wonderful movie still badly in need of a fully-loaded, 2-disc 60th anniversary version with historians and scholars all weighing on multiple-tracks.

If you already have it on DVD, save your money, because you won't learn anything new with this dude.

Zachary LittrellReviewed in the United States on August 6, 2019
4.0 out of 5 stars
"People, Love, An Idea? Just to cling to? You poor slob."
Verified purchase
It's one of the most American moments in its history: a trial over whether a teacher can teach evolution. In this little Tennessee town, the roots of fundamentalism choke the American soil of religious freedom. The conclusion of the trial is foregone --of course the s.o.b. will be found guilty, when the word of God is at stake. But nevertheless, a tiny, sweaty lawyer in the shape of Spencer Tracy marches to the bench and gives it a shot anyway.

It's a film of gleefully big speeches, with Tracy's Drummond and Fredric March's Brady arguing the case for God as much, if not more so, than the actual case of the school teacher. They nearly tear the courtroom apart, masticating on ideas far bigger than the jury can reckon with. It's a grandiose pissing match, while the world around them is crumbling into hate, willful ignorance, and disillusionment. Dick York, an extremely familiar face, just sheepishly sits behind the defendant's desk like a doughboy in the trenches, waiting for the world war to end.

Ironically, I don't think this film will convince anyone not already entrenched in their ideas. But I like that it takes a very firm stand. It has anger towards religious bigots, and disdain for cynical vultures that thrive in hatred. I'm not sure why it bothered to change the names, because it's 100% the Scopes Trial (with some creative flourishes), but I reckon it has nobler, more general goals. Why, oh why, does this movie still feel fresh and relevant over 50 years later?
14 people found this helpful

robin spindlerReviewed in the United States on August 12, 2021
3.0 out of 5 stars
good case study in anti-Christian propaganda
Verified purchase
As others have pointed out this is loosely based on the trial but makes many changes that give a false image of what took place. As is typical of anti-Christian propaganda the Christian side is shown to be everything from stupid to crazy, and the other side is shown to be reasonable, thoughtful, and intelligent; these differences are embodied in the two opposing lawyers, but not confined only to them.

One thing that makes this an interesting study is the year it was made (1960). This makes it a reminder that movies being heavily laced with anti-Christian propaganda is not new. It looks to me like the producers made less of an attempt to mask the propaganda than is usually made today, presumably because audiences then were less likely to notice such things as they are these days.

Beyond the value this movie has as a case study in propaganda, it's well acted and the black and white photography is artistic and very well done. That makes the study a little easier to sit through.
6 people found this helpful

TucsonBobReviewed in the United States on October 26, 2018
5.0 out of 5 stars
Movie about the Scopes monkey trial.
Verified purchase
Historically accurate and extremely well-done. All-star cast and excellent cinematography. Chilling, funny, tragic, ironic. An extra bonus in finding that Gene Kelly can really act, portraying H. L. Mencken, the famed reporter and cynic from the Baltimore Sun who went south to cover this farcical trial, where the law was on trial more than the defendant. The names of the characters were all changed to protect the guilty, but the circumstances reveal it as the trial of the teacher (Scopes) who defied the law to teach evolution in a southern Bible Belt state. My highest recommendation.
16 people found this helpful

Sgt Jim HarmanReviewed in the United States on August 29, 2019
2.0 out of 5 stars
Stop pretending it is representative of the Scopes trial. The writers even said it's fiction!!
Verified purchase
Excellent acting and production BUT is almost totally historically inaccurate. Transcripts, news reports and synopses are available (PLEASE read them if you are interested in the truth), even on-line, and show this movie systematically misrepresented the main characters and most events. The name changes were done because it is a very fictionalized account of the event it is (vaguely) based on. Writers of the play it was adapted from, Lawrence and Lee, said it is NOT history. IF people would just watch it and judge it's merits as a movie, there would be no issue. However, it is in almost NO WAY a portrayal of the actual events and characters of the Scopes trial. As a stand-alone movie it would rate at least 4 stars, but for it's historical dis-ingeniousness it merits zero.
7 people found this helpful

Suzanne oneillReviewed in the United States on August 27, 2021
5.0 out of 5 stars
Neglect Not Fredric March
Verified purchase
This is a screenplay that in lesser hands would be pat, trite and have a dislocated shoulder from patting itself on its enlightened back. But the two leads prevented this movie from getting away with that. Spencer Tracy had the easier part--more comprehensible to most modern-day audiences, witty, ramshackle and progressive--and chockful of booby traps were it not for Tracy's intelligence and utter inability to be dishonest or overly impressed, especially with himself--Katharine Hepburn's baked potato to his fingertips. But if Tracy had to dodge a few booby traps, think of the treacherous minefield Fredric March had to traverse. He had to take what could easily have been a self-righteous Bible-beating blowhard and turn him into a flawed, faltering human being whose heart was in the right place but whose need to win got the better of him, a place in which all of us have found ourselves. In the end, we in the audience have grown to pity him, to worry about him, to love him. What could have been a two-dimensional caricature was given the tragic dignity of a human being who eats too much, picks his teeth and has his heart broken in front of a world whose love he craves. Fredric March is largely forgotten these days, but his talent deserves to be remembered and enjoyed. Check out HIS Dr. Jekyll and Mr. Hyde--made in 1932 and still a little ahead of its time. I've never seen another Mr. Hyde who enjoyed himself quite so much. In a blind twist of foreshadowing, his Mr. Hyde most resembles a primate, and he grows more simian with every transition. I wonder what Matthew Harrison Brady would have made of that.
2 people found this helpful

Don BishopReviewed in the United States on March 13, 2018
5.0 out of 5 stars
A don't miss, edge of the seat classic.
Verified purchase
A fictionalized telling of the Scopes "Monkey Trial" of the 1920's, about a Tennessee law that forbade teaching about evolution. The characters and some of the events were changed to improve the story, but the essential issue is clear. A great story tole by an outstanding cast. If Spencer Tracy is before your time, you are in for a treat.
12 people found this helpful

Quiet KnightReviewed in the United States on May 2, 2021
4.0 out of 5 stars
Inherit The Wind Blew Onto Blu-Ray
Verified purchase
Kino Lorber Studio Classics released this interesting(if lopsided) 1960 based-on-fact film that was directed by Stanley Kramer and starred Spencer Tracy and Frederic March as opposing attorneys on the notorious Scopes Monkey Trial Courtroom case where the theory of evolution(Darwinism) was debated after a Tennessee schoolteacher(played by Dick York) was fired for teaching it alongside creationism, as it was illegal to do so. Gene Kelly, Harry Morgan, and Claude Akins costar.

Looking fine in HD, an upgrade from the MGM DVD, porting over the theatrical trailer but now including an audio commentary by film historian Jim Hemphill.
One person found this helpful
See all reviews
Back to top
Get to Know Us
Make Money with Us
Amazon Payment Products
Let Us Help You
EnglishChoose a language for shopping. United StatesChoose a country/region for shopping.
© 1996-2021, Amazon.com, Inc. or its affiliates