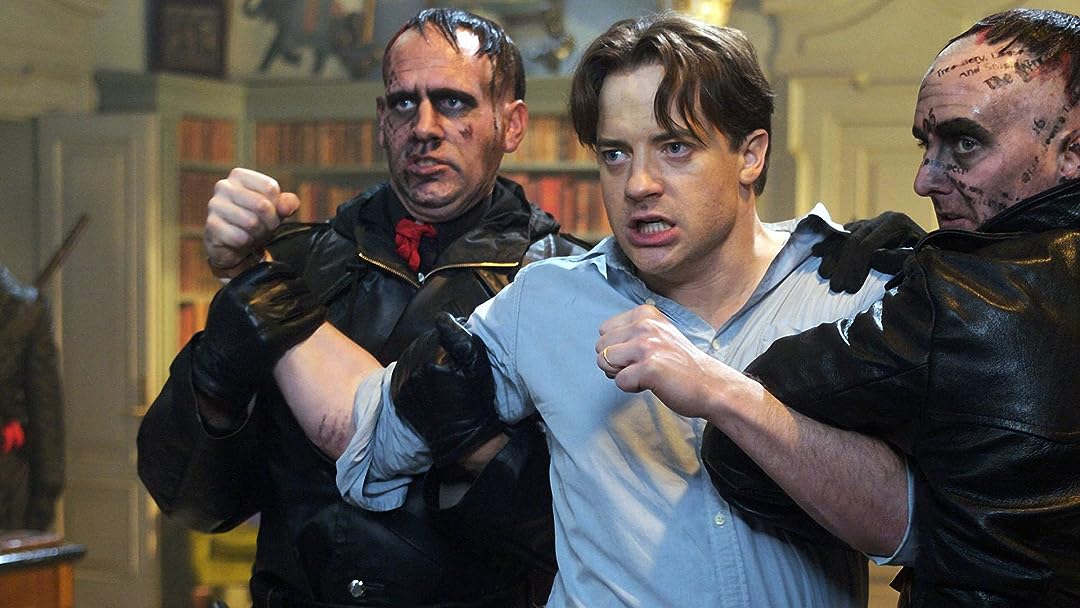 (2,827)
1 h 46 min2009X-RayPG
Meggie's father has a wonderful talent: When he reads aloud, the characters literally come to life, an ability he discovered while he read from the story Inkheart.

GottaDoSumptinReviewed in the United States on May 1, 2021
4.0 out of 5 stars
Magical. Fantastical. Not Just For Children Anymore.
Verified purchase
“A story that opened a door between the real world and our imaginations.” – Co-Producer and Director Iain Softley

What opened the Inkheart door for me was discovering swaggering-cool Matt King was in it. Upon further research, I found the movie features an ensemble cast that includes Brendan Fraser, Paul Bettany, Dame Helen Lydia Mirren DBE, Jim Broadbent, Rafi Gavron, Andy Serkis, Jamie Foreman, and newcomer Eliza Bennett. It’s hard for a production to fail with such a stellar cast; you can’t go wrong w/Bettany and Dame Mirren. So I sat down to watch and was pulled into the story before I knew it happened; it is engaging. (I am not familiar w/the 2003 young-adult fantasy Inkheart novel by Cornelia Funke on which this movie is based.)

As Softley stated in his quote above, Inkheart opened my door between the real world and my imagination. The artwork, animation, and special effects were spectacular! The story had action, adventure, and chills from which nightmares are born. (The Shadow in particular was impressive, realistic, frightening.) It took a lot of hard work by many talented people to connect this film’s numerous elements to flow so gracefully and onto the screen – the epitome of escapism. I got the feeling the actors were having fun with their roles, which made it fun for me to watch. It also made me think: what if one could not read, thus opening the door to imagination? Parts of the world would be lost to one, as would many of the literary references in this story. Finally, there is a moral to this tale: “Man is the measure of all things … the ultimate source of value”.

I have since purchased the film and enjoy it often at my pleasure.

Joel D. WeberReviewed in the United States on September 5, 2022
4.0 out of 5 stars
Good family movie
Verified purchase
Forget all the negative ideas about Brendan Fraser and his apparent ability to only make passable movies. People are simply jealous - because the fame of Hollywood did not get to his head. Fraser has a gentle and happy disposition. He (had) a great physic.

I did not read this book so had no premise, but as a family movie it fits the bill very nicely. No profanity, no illicit sex, no gender confusion or blood. The story simply carries you along with twits and turns, while you enjoy beautiful European countryside and character development.

The movie makes no pretense at greatness but instead feels like real people you could relate to. Enjoyable for the family.
One person found this helpful

CherylReviewed in the United States on April 3, 2021
5.0 out of 5 stars
Slightly dark, but fun fantasy romp
Verified purchase
Not sure how I missed this film when it first came out, as I'm a fan of Brendan Fraser. Rented it recently and absolutely loved it -- If you're a book enthusiast already, I think there's an extra level of appreciation, as voracious readers know that good books take on a life of their own. But if you have a child who is perhaps a little reluctant towards reading for fun and enjoyment, this film might get them to look at books in a new light.

Good performances - and watching this in 2021, it's interesting to see actors who've gone on to very well-known careers (such as Paul Bettany and Andy Serkis) in a role from thirteen years ago; they look so young!

There are some oddities in the film -- why does the daughter speak with a British accent when she was raised all over the world with an American father, and was too young when her mother disappeared for her mother's British accent to affect her speech, for example. But it is a fantasy, so put your brain on hold and enjoy it for what it is.

Sharon R. AndrewsReviewed in the United States on August 9, 2015
5.0 out of 5 stars
A Book Lover's Delight
Verified purchase
I entered this movie like I enter the books I read...patiently, with excitement, waiting for a story to unfold and enfold me. This movie fit the bill. I bought the Cornelia Funke novel for $1 at a garage sale, and about a hundred pages in, I knew I had to see the movie. I expected very little, and received a lot. I'm confused by the reviewers who say that the plot concept "doesn't make sense." Well, if sense for you means Donald Trump running for president and Kim Kardashian being a role model, then I guess it wouldn't. The logic of fantasy is being swept up in a tornado, or lost in a labyrinth with a dangerous mutant monster....it's the world of "What If." What if you read a book aloud, and the characters actually came out of it? That's the premise, that's the sense of it -- the imagination. Very much in the line of The Neverending Story which I bought in an airport to read on a flight and fell in love with. Flight? What flight? I was immersed. With an amazingly brilliant cast...watch for Jennifer Connelly in a small but significant role...she says more with one look from her eyes than most can with ten thousand words. Brendan Fraser is good as the confused, angry, guilt-ridden father...best role I've seen him in since Monkeybones. Helen Mirren is sheer delight as Elinor, the crotchety book loving great aunt. Andy Serkis...pure genius. The rest of the cast keeps up the pace as well. Maybe not of the same caliber as say, Pan's Labyrinth, but damned close.
10 people found this helpful

J. R. ThorupReviewed in the United States on April 20, 2022
5.0 out of 5 stars
Great family movie for book lovers!
Verified purchase
We watched this as a family with our kids who range in age from early teens to toddler, and we all enjoyed it quite a bit. I’m quite bookish so I really enjoyed the premise of a family that loves books and reading and the power behind stories. Plus, we all like Brendan Fraser at our house.
It isn’t the most epic amazing movie you will ever see, but overall it was pretty well done for a kids movie and I thought most of the acting was great! Also, I loved the costumes and the sets were impressive.

KeoughReviewed in the United States on April 20, 2022
4.0 out of 5 stars
Wish it was longer!
Verified purchase
Obviously it’s not as good as the books but it was fun watching it again.
I love the actors and love that it stuck very close to the storyline of the book in my opinion. Also love that Brendan Fraser (the actor who plays Mo) narrated one of the books.
I recommend this movie just because it seems like there are less and less movies that are well done and don’t contain junk.

poke-nerdReviewed in the United States on January 1, 2019
3.0 out of 5 stars
Movie itself was another Eragon and Vampire Acadmey letdown
Verified purchase
Movie was in great playable condition and to those who never read the books it was a enjoyable movie. But they essentially did to this what they did to Eragon and Vampire Academy (both really awesome and enjoyable successful book series, Vampire academy has multiple series following the first) they changed up so many details and added stuff that didnt match up to the book the movie was ultimately unenjoyable and almost couldn't watch it to the end. Not sure why Hollywood producers choose such awesome book series to tank as movies just to make other movies coming out at the same time look even better. Its infuriating.
One person found this helpful

Leroy AndersonReviewed in the United States on August 22, 2021
5.0 out of 5 stars
As a writer, I love this idea.
Verified purchase
It is a movie so there's perspective and destination in mind when I totally enjoyed this look on how not just a writer, a reader can bring life to the words in a book even if that book is evil. There will be that one to deal with the aftermath to fix the situation, to make things right as in the ending of this brilliant movie.
See all reviews
Back to top
Get to Know Us
Make Money with Us
Amazon Payment Products
Let Us Help You
EnglishChoose a language for shopping. United StatesChoose a country/region for shopping.
© 1996-2022, Amazon.com, Inc. or its affiliates