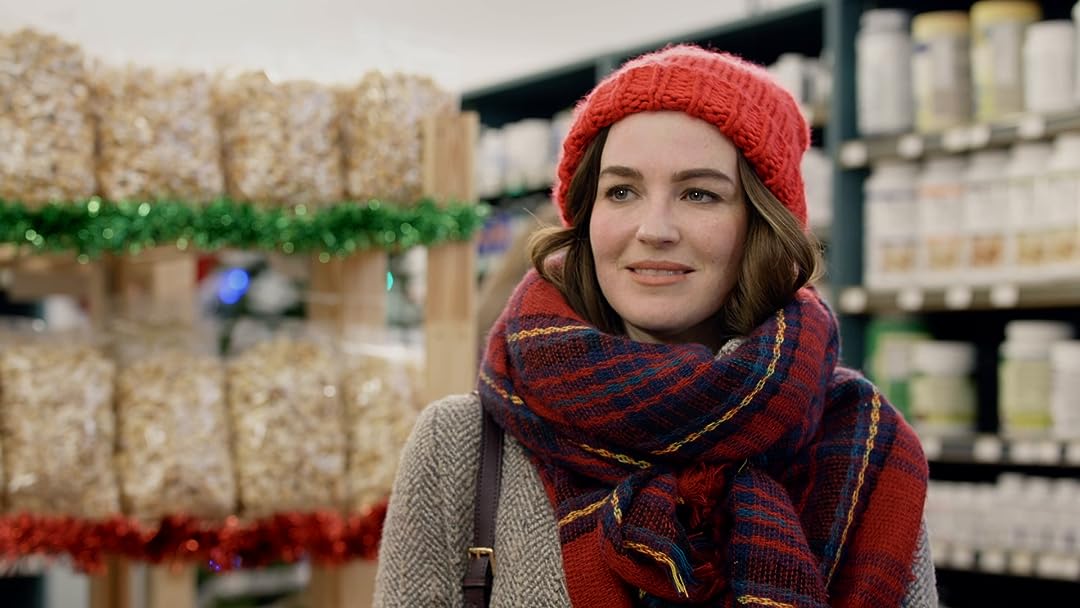 (261)
1 h 27 min20207+
Mandy doesn't get back to her small northern hometown much, this year her Gram is able to finally convince her to come home for Christmas.

She loves her job and is happy. Visiting home is nice, but the city is nice too.

He has the opposite reaction. Hates the city. Loves being home.

Neither are yokels. They are well-educated and have decent families. Turns out their grandparents are a now a couple. Yes, us oldies still lead normal lives. Nothing creepy there.

Both the grandkids want to buy the inn. She is corporate and he wants to run an inn, but mainly sees this as the perfect place to cook as he is a good chef. Yes, it is a step down for him (it would be a step up for her), but we need to live our lives in a way that makes us happy. For neither, money isn't everything. For him, it a job of love and good money to live a comfortable life. For her, while she would get a raise, the important thing is climbing the corporate ladder and moving closer to home for visits.

But they don't fight over it. It started as high school rivals and it turns out they were pretty equal on wins and losses. They are grown up now and see it, not as win/lose, but as saving their little hometown, and finding happiness.

How it turns out (who gets the inn? Who doesn't?) you have to watch.

This a great popcorn night! Enjoy!

Edward S. RichmondReviewed in the United States on June 22, 2021
2.0 out of 5 stars
predictable
Verified purchase
I do not know how this got rated 4.4. It is so amateurish and predictable. If you want to guess what comes next, just think of all the most overused cliches like snowball fights and almost kisses. Yes, this has those and so many, many more. If fact, the whole movie looks like something an amateur author wrote by listing all the worn out ideas from all the movies and books he or she ever saw. Then this was written by stringing the ideas together with little or no transition.
One person found this helpful

Sherry RodriguezReviewed in the United States on January 21, 2021
5.0 out of 5 stars
😇
Verified purchase
😇❤

H. BalaReviewed in the United States on December 14, 2020
4.0 out of 5 stars
LOL, I thought GinnyZee was a real person, I was trying to download her music
To be fair, the dude put in his bid first, but we'll get into that in a bit. Me, during the first half hour or so, I wasn't sure I was going to thumbs up this movie. But I ended up liking it. Inn Love by Christmas is a Lifetime joint that stars Jonna Walsh and a Jesse Hutch who drew the short straw with his unfortunate haircut.

She plays Amanda Leeds, or, as Hutch's character calls her, "Leeds." She's one of them career women who's got her ducks in a row. She's in the hospitality business, being a regional manager for Harton Hotels. She's in charge of three locations, two hotels in Miami, one in Fort Lauderdale. Even on her way out to catch a flight to her Christmas vacation, she's putting out fires.

It's not that her grandma was able to convince Amanda to go back home to Hollybush for the holidays. No, it's that Harton Hotels is angling for more boutique locations, and Amanda was able to talk her bosses into letting her bid on a hotel that is up for sale in her hometown.

Amanda is one of those rare few who finds their job rewarding. She genuinely is thrilled to help her hotel clientele, to troubleshoot their complaints. So don't think her too mercenary when you learn that there are big perks involved if only she can close the deal by next week: a hefty raise, a transfer to corporate office.

At the car rental place, she bumps into a childhood acquaintance, Lucas Manzino (Jesse Hutch), and they decide to drive to Hollybush together. Amanda has no choice, really, seeing as a mix-up at the car rental had given the last vehicle - which would've been her car - to Lucas.

The drive over is long enough for them to catch up, which is how we learn how very competitive these two are. Amanda was the school's year book editor and the head of the track team. She beat out Lucas for high school valedictorian, and she beat out fifty girls to land the part of Sandy in Grease. Meanwhile, Lucas was captain of the football team, was voted class president, was the prom king. As happens in these tv movies, Lucas was a Wall Street guy in Manhattan until just last year when he became tired of the hustle and bustle and moved back home. I'm pretty sure these movies do this just so we know we're not dealing with a rube here.

During their hanging out, Lucas does pull a jerk move. Amanda confides to him that she's eyeing the Chesterwood Inn, the one just off Highway 8. There were any amount of moments during which Lucas could've let on that he had already put a bid on the place. But he keeps mum.

Fact is, the town of Hollybush ain't doing so well. Tourism is down. A lot of the local businesses - including the inn - are in big trouble, courtesy of that terrible blizzard last year. The town had rallied behind Lucas, the folks seeing him as the last best hope to maybe turn things around. The inn is all but sold to Lucas. Amanda's assignment just got exponentially harder.

At least, the inn's proprietor is willing to entertain Amanda as a potential buyer. But both bidders bring something valuable to the table. In this corner is Lucas with his amazing culinary skills, and his solemn vow to upgrade the inn's menu, and the dishes and baked goods he keeps bringing over to tempt the innkeeper. This guy can work wonders with nothing but bread, mustard, and a jar of pickles. In the other corner is Amanda with her organizing and decorating skills and her knack for promoting and marketing an inn so modest it doesn't even have a social media presence.

What's gratifying is that we don't get much of that annoying rivalry between the two leads. Amanda and Lucas allow things to play out naturally. They don't try to sabotage each other. Oh, there's a mean girl, Ashley, who's always throwing shade at Amanda in defense of hometown hero, Lucas. And Amanda does get into her feels because her grams is dating someone who- well, I'll leave it for you to find out, but it's borderline icky.

Jayne Eastwood is here as the grandma, and I think this is the third television Christmas movie she's done in 2020. She does have that line "Is your cold better?" before she hugs some rando at a party, and I'm thinking this is a nod to the current pandemic.

If you were wondering whom she'd been texting with throughout the movie, you find out who in the end, and it's kind of cool, even if it comes out of left field. Who doesn't come out of left field is Elena Juatco who consistently made me smile or laugh as Amanda's childhood friend, Jackie.

Another thing I liked was that the movie didn't telegraph who would end up as the winning bid. The one thing I really liked was the mega mac and cheese, with its two pounds of cheese, at Hank & Son's Diner. That dish looked sooooo good, man. The deal is if you could polish off the entire plate by yourself, it's free plus you get your picture on the wall. Gimme that.
7 people found this helpful
See all reviews
Back to top
Get to Know Us
Make Money with Us
Amazon Payment Products
Let Us Help You
EnglishChoose a language for shopping. United StatesChoose a country/region for shopping.
© 1996-2022, Amazon.com, Inc. or its affiliates