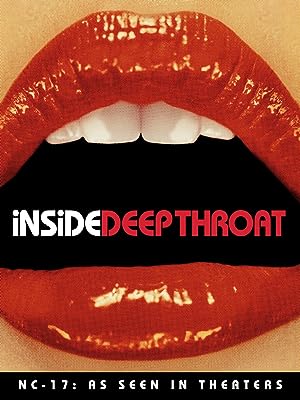 (194)
6.71 h 29 min2005NC-17
More than 30 years after Deep Throat's provocative debut, this documentary examines the legacy that the most profitable film of all-time left on society.

This extensive expose' covers all the angles of the film, from its becoming a household name to the religious right rising against it to the feminists anguishing over it. [No documentary of this type would be complete without Gloria Steinam wringing her wrists & stomping her feet].

Robert CarlbergReviewed in the United States on December 1, 2005
5.0 out of 5 stars
Once Upon A Time...
Verified purchase
Once upon a time a first-time filmmaker decided to make a "stag film" (as they were called back then) using color and sound and real lighting and expensive 35-millimeter film stock. This was unheard of.

So he got some backers, found a first-time actress with a unique talent, and drafted his production assistant into co-starring with her. For $25,000 on a 6-day production shoot he created a light-hearted, sexy, humorous -- though not particularly good -- high quality stag film.

Then a funny thing happened.

He showed the film in New York, and authorities closed it down. But not before it got reviewed by a New York newspaper. That made more people want to see it, and it opened elsewhere.

And got closed down again. Which made more people want to see it. The Nixon White House decided to make a test case out of "Deep Throat" and launched an expensive 5-month trial accusing the co-star, Harry Reems, of obscenity.

Which made even more people want to see it.

The whole thing snowballed as people reacted to the buzz about this film, a buzz entirely created by the self-important bigots who thought it ought not to be seen and tried to prevent its being shown. It's not so much that "Deep Throat" was a great film (it isn't), or a breakthrough (it isn't), or the first of its kind (it wasn't). The whole thing was people reacting against censorship.

People in America don't like being told what they can or cannot watch, or read, or think or feel. People feel strongly about their freedoms, and self-appointed censors -- who thought they were going to protect people from themselves -- only ended up creating a huge furor which propelled the film into an unexpected mainstream acceptance.

Eventually, with subsequent court actions and attempted repressions under the Reagan Administration, adult films became a full-fledged industry, a multi-billion dollar cynical powerhouse -- all thanks to the right-wing religious conservatives who think they know what's best for you.

This documentary tells that story in detail, using interviews with most of the characters involved (sadly, Linda died in 2002), famous commentators, personalities and archival news footage. It is wry and insightful and humorous and informative and eye-opening.

And there are lessons to be learned here, for those same self-appointed arbiters of public taste are still attempting to impose their moral standards on the rest of the country. There is much to learn for them, if they would just stop being stupid for a moment.
14 people found this helpful

jonny irishReviewed in the United States on September 16, 2014
5.0 out of 5 stars
The proverbial blow job, and other cast of 70 characters you just have to see
Verified purchase
There are a few documentaries available about the porn industry, and some of them are well put together and allow you to observe just how dysfunctional some of these men and women are but what makes this film so special is that it goes back to the movie that set the gold standard for hard-core pornography. Much as been written about Linda Lovelace, more than half of it isn't true and the other half will I'm not sure if that's true either. What's most important year is to recognize that back in the day these filmmakers and actors and actresses really believed in what they were doing they believe that they were making art they also believed that someday hard-core uncensored sex between actresses and actors would be commonplace in mainstream movies. How wrong they were, we live under the illusion when watching an R-rated movie that the participants have both climaxed during their lovemaking and they both enjoyed the sex. But will never know will we, I'm sure that Linda Lovelace did not invent the blow job and although she was well skilled in this act, there are hundreds of girls in the adult entertainment industry who can match her skills and take on 250 guys in three hours Linda was a victim of Linda and nothing else and to say that she was forced into making this film after the fact is pure hogwash any novice viewer can see that she is in her element and enjoying her skill what Dennis Hopper has to do with any of this I have no idea he's just some stuttering retard who got lucky and Hollywood Johnny says this is definitely worth a watch especially uncensored version I have personally come across at least three women in my lifetime who are just as good and if not better at fellatio than Linda and I've loved every one of them thanking you in advance rock out with your cock out Johnny Irish
One person found this helpful

Truth be told, Linda Lovelace was never attractive enough or sexy enough, in my opinion, for this type of work. Carol Connors was fairly hot, though.

I could have done without the "star" cameos: Richard Dryfus and the batty chick who wrote Fear Of Flying, etc. Who cares what these people have to say & what makes them experts when it comes to sex, anyway?

Oh yeah, they were stuck in to give the doc "name-value" I suppose.

Skip the painful/useless/dull commentary by the filmmakers themselves.

Otherwise, worth seeing. Am glad that Harry Reems was able to pull himself up from being homeless (after Meese and his people went after him, etc.) and is now married and having a decent life making a living in real estate.

To tell you the truth, I always thought making a huge fuss over somethng as ridiculous as sex always struck me as not only moronic, but an absolute waste of time.

Sex? It's like eating or sneezing, breaking wind or blinking. Just part of life. Nothing more, nothing less.

We're born, we get laid (now and then) and they drop us below--for that dirt nap. Viola. It's over before you know it. So why sweat the sex?
One person found this helpful

JohnReviewed in the United States on August 1, 2021
4.0 out of 5 stars
Good Documentary.
Verified purchase
It has some interesting interviews. File footage from older talk shows circa 1970's. Some graphic sex but it does have NC 17 rating. Overall makes for a pretty good documentary.

Nancy OsborneReviewed in the United States on August 1, 2013
5.0 out of 5 stars
Just Sayin'
Verified purchase
Honestly, I haven't seen the original movie since it first came out, but this documentary is a must see. I gave it 5 stars because of the impact the movie, Deep Throat, had on our culture then, and now. Even Jackie Kennedy saw it, on the sly. The social and cultural significance was understood and accepted by the general population, after the fact. The movie itself is still not acceptable to many- I'm not saying they don't like the movie- many think it is vulgar and shouldn't be shown at all. So my point: sexual, cultural or whatever revolution we have, some people still want to choose our movies and their impact on us, for us. Maybe this is a sad commentary on our state of politics. You think?? It's the same ignorance that feeds the disease. This documentary gives a wonderful balance to the sexual revolution in our culture before, during, and after. Of course, the irony, underneath it all, whether it's a big evil sin, or it doesn't have any significance, is that you don't have to make a choice. There's an app for that. Or, someone far more worthy, to make the decision for you.
One person found this helpful

William T. Gilbert IIIReviewed in the United States on February 19, 2017
4.0 out of 5 stars
good DVD has Adult materiel in it.
Verified purchase
if you understand that this show is some interviews and short clips in regard to Deep Throat, then this is a very interesting DVD. I don't think you are very likely to see the Linda Lovelace Deep Throat>full length movie on DVD, ever. if you do, then it will be very pricey, and then hard to get if even possible to get. Inside Deep throat is an interesting DVD. it seems to be a good print of it, too. it is a keeper for me. if you don't like adult oriented shows, then you won't like this one.
7 people found this helpful