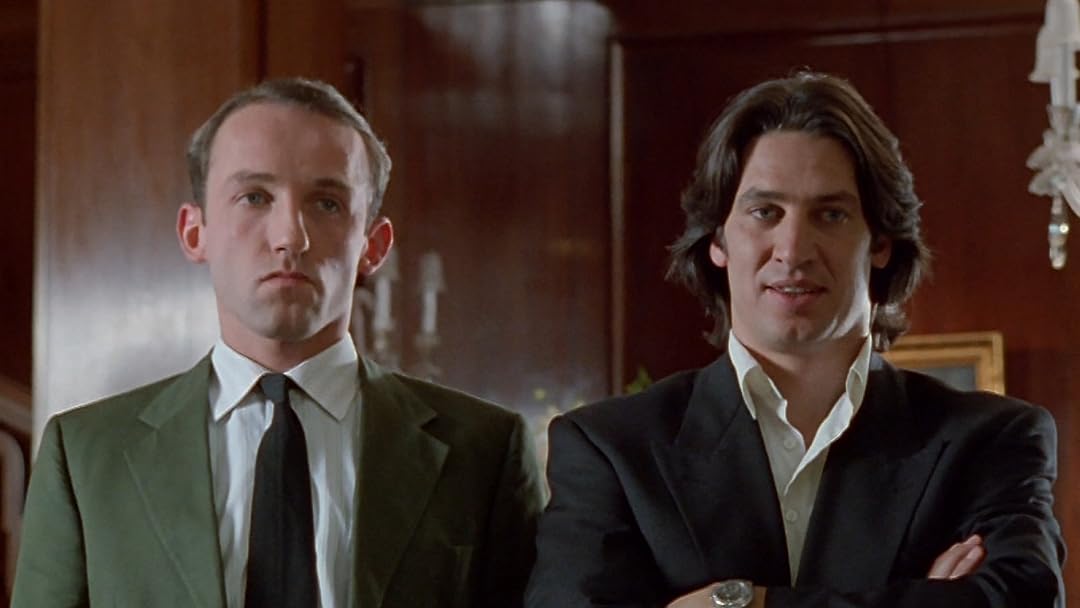 Season 1
(60)
7.2199713+
There's a new crime-fighter in town: Inspector Rex! After his handler is killed, police dog Rex teams up with recently-divorced inspector Richard Moser to investigate crimes and solve mysteries on the streets of Vienna, with the help of their two-legged friend, Inspector Stockinger.

Victoria KingReviewed in the United States on August 8, 2016
5.0 out of 5 stars
Vienna, Viennese Standard German, and Rex, the intelligent and well-trained German Shepherd
Verified purchase
Filmed in Vienna and spoken in Viennese Standard German, the series might be a little kitschy were it English language; however, the Viennese settings, the German, and above all, Rex, contribute to this entertaining series. Although it was filmed in the 90s, the video and sound quality are excellent. Some aspects of some episodes contain adult-only themes and scenes, so if viewers are younger than teens, parents might want to monitor the viewing. Otherwise, the episodes tend to move along, and the characters are fleshed out. Rex, of course, is the reason young viewers would enjoy the series. I appreciated the training that went into the dogs who played Rex, but, for me, the Viennese setting and the Viennese German were the main attractions. I might mention that the last episode is a prequel to the other episodes. In it Rex is introduced as a puppy, and some of his habits and practices as an adult are explained. Amazon, please keep giving us foreign-language films.
18 people found this helpful

Happy ReaderReviewed in the United States on April 11, 2019
4.0 out of 5 stars
Like an 80's American Cop Show - The Dog is Great!
Verified purchase
Vienna, Austria, 1994. In a glass-enclosed restaurant balcony on the Stephansplatz, Vienna, Mr. Pyotr Zhukov is trying to end his shady business relationship with Markus Spitzer. Not because he's going clean, but because the end of the Cold War means he doesn't need middle men anymore – he can keep all the profit for himself. Spitzer excuses himself to visit the restroom, and Zhukov realizes just too late why Spitzer left his briefcase on the table.

The armed response to the explosion is exceptionally quick, and Spitzer doesn't get out of the building before a soldier with Rex, his bomb-sniffing German Shepherd, hold him up. Richard "Richie" Moser also shows up. He's a detective with the Kriminalpolizei Mord Kommission (homicide unit). Suffice it to say, Rex eventually moves from the army to the homicide unit. And It turns out he's a great homicide detective.

Location shots for "Inspector Rex" are shot all over Vienna. The "Murder at Schönbrunn" takes place in the well-ordered forest around the palace's magnificent gardens.
Trivia: Rex's full name is Reginald von Ravenhorst.

Season 1 of "Kommissar Rex" originally aired in Austria from November 1994 to February 1995. These 14 episodes total 680 minutes, about 56 minutes per episode. If you buy it on disc, the audio is the original German with automatic English subtitles. There are no Bonus Extras on the discs. See the comment I added regarding subsequent seasons.

There is quite a bit of humor in this series, though not the laugh-out-loud quirkiness of "Murders at BarLuma". And, of course, you have the delightful dog. I liked the series, and if more seasons are made available on Region 1 DVD, I'll purchase them. I would call Season 1 a "standard" cop comedy-drama, rather like an 80's American TV show – except for the European manner of showing naked breasts once in a while. The murder mystery plots are fine, with occasional flights of fancy, including Moser doing goofy things like breaking and entering. The interactions among the characters are fun, though a 45 minute show can't have the depth of a longer episode. "Inspector Rex" is not an exceptional series, but worth it.

More trivia: Apparently a Canadian production company is shooting a totally new version of "Rex". Since I like a lot of Canadian series, I'm looking forward to it.

Jane EyreReviewed in the United States on September 13, 2016
5.0 out of 5 stars
Inspector Rex Good Detective and Dog Series
Verified purchase
Endearing characters, great glimpses of Vienna, standard and therefore satisfying police procedure, and truly bad criminals attracted me to this show. It's been a long time since Turner and Hooch, but kind of like that. Except, Rex is very well behaved. Yes, fictional, perhaps a tad dated, but the stories are interesting mysteries and the outcomes are satisfying. I enjoy seeing different parts of Vienna, and listening to the Austrian language. The subtitles are very adequate so I can follow the dialog well.

I subscribed to Amazon Prime because they host tv shows that are either never on standard tv, or are too old. I don't know how the plug got pulled on gory television rules, but I don't care to look at it. I appreciate the lighter glimpses of this show. If you liked "Midsomer Murders" or "Mr and Mrs Murder" you might like this show, too. I do.
3 people found this helpful

Carol MorrisonReviewed in the United States on November 21, 2016
5.0 out of 5 stars
A really fun show with a great Canine Actor in a lead role. He is quite humorous and intelligent, just like his owner.
Verified purchase
Love this show. Have seen season 1 and am breathlessly awaiting season 2 and every one after that. Rex is an incredible Actor. He is beautifully trained and I already can pick up by his facial expressions just what little trick he's going to pull next. It's a fun show and I love the other characters
as well. I also fell in love with his puppy show, he's is just so interesting and fun to watch, and I've had an intense fear of this breed since a child encounter with an angry one, but have quite altered my feelings since watching this show. Thanks for having this show to purchase.
2 people found this helpful

Green Bay BarbReviewed in the United States on June 13, 2016
5.0 out of 5 stars
Outstanding TV Series
Verified purchase
The actors in the first season could not have been better chosen for their roles! "Moser" is in reality a dog lover, based on mannerisms with Rex, and authentic portraying a new dog owner. The humor can be subtle but the interactions between the colleagues is hilarious! Rex is a super actor as well, and remarkable with his training. Unique and creative storyline! Some crimes are too creepy as realistically depicted. The locations in Vienna - apparently not sets or a studio lot - are stunning. Names and clothing are realistically traditional; even Tyrolean coats; that an Austrian or even Viennese accent can be heard is awesome! With such a spot-on blend, it's too bad the original cast could not have remained for a few seasons. That I bought a DVD after seeing the episodes just once before is a testament to it's enormous appeal - even 20 years later! I now have friends watching the English caption versions and enjoying them far more than anything on TV in the U.S. Please release the second year in English subtitles soon!!!
10 people found this helpful

JeenaReviewed in the United States on July 31, 2016
5.0 out of 5 stars
Lighthearted cop show with easy-to-read subtitles and a great human-dog relationship..
Verified purchase
First off, the subtitles are great: large, bright white, super-easy to read in every frame. So often the subtitles fade into the background and are in very small font so it's almost impossible to read them, especially if you're sitting far away from the screen. Not these - they're fantastically clear. I wish all subtitles were this well done.

Now, for the content: For a cop show, this is pretty lighthearted. Sort of the anti-Criminal Minds. Think more along the lines of Rizzoli & Isles. There are no horrific, sick serial killers and twisted psychopaths whose minds we're asked to immerse ourselves in (no thanks - not a Criminal Minds fan here). The actors are a bit hammy, and the overall feel of the show can be hokey at times, but I still really liked it. It's a good-natured show, and the plots make sense and are pretty straightforward. The relationships between the actors are lighthearted, humorous and warm.

As for Inspector Rex, the dog, he's simply adorable (although he's a big, well-muscled German Shepherd, not one of those tiny dogs celebrities carry around in their purses). If you're a dog lover, give this show a watch, because I think you'll fall in love with Rex. He has a very expressive face and an infectious enthusiasm. Clearly he's been well trained and well loved. The relationship between the lead character and Rex is wonderful, both loving and humorous.

No, this isn't Shakespeare - far from it - but it's enjoyable and fun, and I think people who love dogs will like this show. I certainly did. And I'd love to adopt Rex!
15 people found this helpful

CorgisRock!Reviewed in the United States on February 27, 2019
5.0 out of 5 stars
Excellent series!
Verified purchase
Absolutely wonderful Austrian/German t.v. series starring an amazing and beautiful German Shepherd as Inspector Rex. This show is perfect for everyone from children to my 97-year old mother. Also, the setting of beautiful Vienna, Austria lets us see life in Europe. The subtitles are clear and easy to read without having to rush. Recommended very highly!

SIRReviewed in the United States on November 15, 2016
5.0 out of 5 stars
More! More! I love this dog. Please stream more Inspector Rex on prime.
Verified purchase
Rex is the best. Detective show that's light but has endearing characters especially the German Sheppard Rex. I love watching this show. Please, please Amazon give us more seasons of Rex to view on Amazon prime. The DVD are not for region 1 so please stream more seasons of Inspector Rex. I can see why this show has had such a long run. We need more Rex.
2 people found this helpful
See all reviews
Back to top
Get to Know Us
Make Money with Us
Amazon Payment Products
Let Us Help You
EnglishChoose a language for shopping. United StatesChoose a country/region for shopping.
© 1996-2022, Amazon.com, Inc. or its affiliates