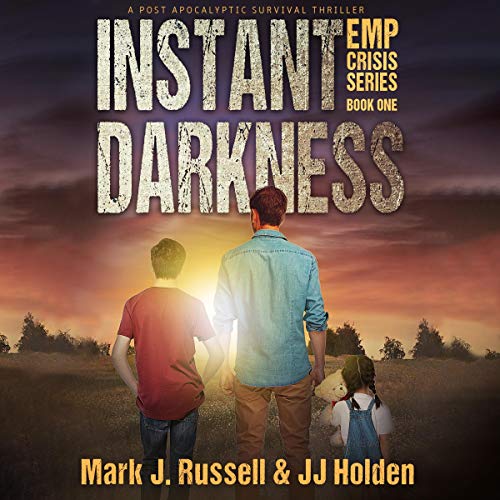 A massive solar flare is about to bring the country to its knees.

When Abram Patterson learns about an impending solar flare, every moment matters. Loaded up in his trusty 1976 Land Cruiser, he must get his wife and daughter from their home in New Hampshire to their remote retreat in Central Vermont. But can he reach his bug-out location before civil unrest makes travel all but impossible?

A father who must protect his children from certain death.

Nick Caulfield, a single father of two, is always in work mode. But when the country is on the brink of collapse, he must focus on getting his children to safety. His neighbor, Abram, has left in a hurry, and he quickly realizes that the region will soon be plunged into chaos. He discovers that his son has acquired directions to his neighbor’s compound, but he suspects they will not be welcomed.

A harrowing journey with an uncertain outcome.

A good Samaritan takes a risk to aid a man and his teenage son and young daughter, but when his services go unappreciated, he feels slighted by the man. Will he take the high ground and be the selfless man he strives to be? Or will he seek revenge, allowing his morals to crumble as humanity quickly unravels?

The solar flare is only the beginning. What would you do to protect the ones you love?

Instant Darkness is the first book in the EMP Crisis series, a post-apocalyptic survival thriller series about regular people struggling to survive after a solar EMP.

Your audiobook is waiting!
Learn more about membership
List Price: $19.95
You Save: $6.96 (35%)
By completing your purchase, you agree to Audible’s Conditions Of Use
Sold and delivered by Audible, an Amazon company

M. Thompson
4.0 out of 5 stars Better than the average post-Apoctalyptic series but still only 1 installment not a book
Reviewed in the United States 🇺🇸 on April 8, 2022
Verified Purchase
That's what I don't like about young writers today, they write like they are doing assignments of chapters instead of a book with a conclusion, instead the "book" ends with no conclusion and you have to get the next part and the next to get the whole story. No real author has done this since the days of pulp magazines in the 1930's when paper was expensive and serials were how new authors or old experienced ones previewed their works to the public for a nickel or a dime. At least this one stays on plot.
Read more
Helpful
Report abuse

KiKi
5.0 out of 5 stars Cannot wait to read the next book in the series!
Reviewed in the United States 🇺🇸 on July 14, 2022
Verified Purchase
Held me captive until the end~left me wondering what will happen in the next book! I pray our world that we currently live in never gets this bad, but IMO we ALL NEED CHANGE TO MAKE THINGS BETTER!
Read more
Helpful
Report abuse

Willie Schneider
4.0 out of 5 stars Worth a read if you're hungry for another EMP type book.
Reviewed in the United States 🇺🇸 on January 17, 2020
Verified Purchase
Not action packed, and the Father seemed like too much of a candy ass, but I think that was the idea. I think the father was supposed to be a pacifist type of guy. All in all it was a good read. Looking forward to reading the sequel, hopefully it'll get a little more exciting.
Read more
Helpful
Report abuse

Adolf von Württemberg
4.0 out of 5 stars Credible characters under stress
Reviewed in the United States 🇺🇸 on August 24, 2019
Verified Purchase
It deserves five stars but I deducted one because more care should have been taken to proofread it. The novel brings out many problems not only in bugging out but also after arriving at the site. I look forward to a follow-up novel.
Read more
One person found this helpful
Helpful
Report abuse

Kurt E. Feltenberger
2.0 out of 5 stars I Wanted To Like This...
Reviewed in the United States 🇺🇸 on January 21, 2021
Verified Purchase
The description on the web page sounds really good...and then you start reading the book and it's like buying a cheap jar of jelly at the dollar store, but since it's in a really elegant and upscale container you think it's good...but it's nothing more than strawberry flavored paste.

We're led to believe that Abram has been preparing for "something" for quite some time; he has a farm in an out of the way place, supplies, weapons, even a guy who "knows how to do everything", yet he fails to cover even the most basic issues like security at night and making sure people have adequate communications tools.

Then there's the fact that other than Gary, no one really knows how to farm. They've had the farm for a while, yet never took the time to learn even the basics. This extends even to preparing the farmhouse...they wait until something happens and then Gary scrambles to get the shutters put on, but never tested all of them because at least one is out of spec.

For being "preppers" they sure aren't prepared.

Next, Abram and Gary just aren't likable characters. One of the first things that my creative writing prof in college told us was to have compelling characters that the reader could invest in. If they aren't angry at the world with a rising blood pressure, they're arrogant, misogynistic, sexist, or just plain rude and stupid. I guess if you're into Cave Man survival lit, this is fine, but they worked so hard against each other (and that over done fence!) that things would have been so much smoother for them had thy worked together and talked.

Finally, there was just way too much personality conflict between Abram and Gary for them to be "best friends" who had known each other for years.

I expected better and I guess 20 years ago when people still had to submit their book to a publisher this would never have seen the light of day without massive amounts of editorial help.
Read more
Helpful
Report abuse

WitchyWomyn
5.0 out of 5 stars Great new survivalist novel...
Reviewed in the United States 🇺🇸 on August 14, 2019
Verified Purchase
Another great book from this author! Getting to a remote survival compound is hard. Getting them to let you in is also hard. But that’s only the beginning!

bananaboat
4.0 out of 5 stars Family
Reviewed in the United States 🇺🇸 on January 1, 2020
Verified Purchase
So interesting. How a prepared family and an unprepared family manage to come together to fight the bad and not so bad people.
Read more
Helpful
Report abuse

Gerard M.
2.0 out of 5 stars Weak story, even worse ending
Reviewed in the United States 🇺🇸 on February 18, 2020
Verified Purchase
This story starts out pretty weak and then goes totally off the rails in the end. There is some decent dialogue and some interesting character differentiation, but parts make no sense. The authors spend so much time writing about the fence around the compound, as if it will make the place impenetrable. The whole end part is kind of incomprehensible, and I am not interested in most of the characters well being anymore. Will not consider the sequel.
Read more
6 people found this helpful
Helpful
Report abuse
See all reviews

Kindle Customer
5.0 out of 5 stars Instant darkness
Reviewed in Canada 🇨🇦 on April 10, 2022
Verified Purchase
So I have found my new all time favorite EMP book. This book grabs your full attention from the first chapter to the very last word. Very well written and very believable
Read more
Report abuse

Amazon Customer
5.0 out of 5 stars Great read
Reviewed in Canada 🇨🇦 on October 17, 2019
Verified Purchase
Another story well written and makes you think about the fact that maybe it could happen one day. We can only hope not as the authors words could ring true.
Read more
Report abuse
See all reviews