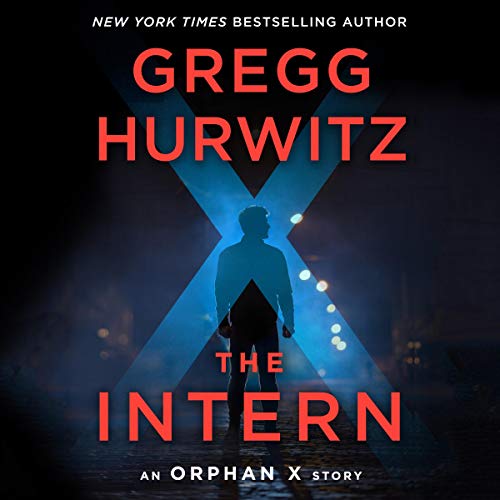 The Nowhere Man is a figure shrouded in secrecy - a near legendary figure who helps the truly desperate, those with nowhere else to turn who are lucky enough to be able to reach out to him. When darkness closes in, the Nowhere Man is your last, best hope.

Before he was the Nowhere Man, Evan Smoak was a highly trained government operative known to a few as Orphan X. But he now lives by hiding in plain sight, keeping his head down and his eyes clear. So when a local summer intern for a tabloid news site finds herself trailing an aggressive reporter into a crime zone, things go terribly awry. The only person who can help her is a man with the background and the skills of the Nowhere Man.

4.2 out of 5 stars
4.2 out of 5
373 global ratings
How are ratings calculated?
To calculate the overall star rating and percentage breakdown by star, we don’t use a simple average. Instead, our system considers things like how recent a review is and if the reviewer bought the item on Amazon. It also analyzes reviews to verify trustworthiness.
Top reviews

Peggy
1.0 out of 5 stars Short story? More like a long essay. If that.
Reviewed in the United States on December 19, 2018
Verified Purchase
I read the book on my PC, print larger than normal. 25 screens. Only 20% of the 'book' is the actual story; the rest is the first 9 chapters of the next book - and who wants to read a bit of a mystery and then wait and wait for the rest? As much as I loved the first few books, this shortest short story imaginable is little more than an undeveloped short scene of a low quality TV show. It appears the purpose of this book that I paid for is to interest me in buying the next book. I resent being hoodwinked. Such a disappointment.
Read more
15 people found this helpful
Helpful
Report abuse

Cliff, Voracious Reader
1.0 out of 5 stars 8 pages of nothing
Reviewed in the United States on December 18, 2018
Verified Purchase
Do not waste your dollar, this is 8 pages of nothing. then a preview of his new book. there is no story here at all.
Read more
13 people found this helpful
Helpful
Report abuse

Slaven
5.0 out of 5 stars Watch The Nowhere Man come to the rescue of this young intern!
Reviewed in the United States on December 18, 2018
Verified Purchase
Meet Lucas, a reporter trying to make a name for himself by chasing an urban legend in an abandoned church in LA, just North of Pico, near the 101. The church where ‘someone’ took out a gang of MS-13, the gang from The Mara Salvatrucha. This wet under the ears reporter accompanied by his young intern Aurora enter this church, she is tasked with recording their escapade. As they’re observing, a group of rough looking muscle heads approach. They announce that they have taken over the church as their new home, and from there the reporter and his intern try to leave. Lucas, not being exactly what the group of men are after, is dismissed, but not until he gives up his watch, a stainless steel Breitling. Leaving her there all alone, he bolts.

Aurora, realizing she is about to go through a very brutal experience attempts to put up a fight. she makes a fist, hammers it into one of her attackers’ groin. As she does that, she falls to the ground and notices on the roof a figure of a man. Then, she notices her attackers backed away and hears grunts, hears cracks of skulls, tendons and muscles tearing, gasping. Then, a calm voice reassured her, the urban legend they had been after, calm and relaxed. Not even breathing hard after that ordeal, the Nowhere Man!

Then as fast as he got there, as fast as he dispatched the assialants trying to have their way with this young Intern, he was gone. She goes to leave and notices Lucas parked up the street. She goes up to his car, gets in, hands him back his watch and notices he’s been crying!

A very cool short story that will give you a small Orphan X fix before the highly anticipated Out of the Dark is released on 1/29/2019. This short story takes place between Hellbent and Out of the Dark, as the scene – the church is where Evan took out the MS-13 gang in Hellbent in order to save Xavier, the son of Benito Orellana. If you remember that scene, Evan had a tracking device in his stomach which activates when he eats. He gets there, face to face with Freeway, the gang leader surrounded by his men with guns trained on him, Orphan X pulls out and eats a snickers candy car. Then a Black Hawk full of operators and Van Schiver’s and Candy comes and a deadly battle ensues. Whats left… the ruins of a church described by Lucas in The Intern. Check it out, absolutely nothing Gregg Hurwitz writes is boring. While short – hence the name, The Intern: An Orphan X Short Story. It was most definetely fun to read.
Read more
4 people found this helpful
Helpful
Report abuse

Astrida M
3.0 out of 5 stars This is a very short short story.
Reviewed in the United States on December 21, 2018
Verified Purchase
When I ordered this, I thought it was going to be about 40-50 pages. It is only about 15 pages. It continued from Hellbent. I wasn't too disappointed because I like to read about anything Evan. But I am disappointed.
As a bonus, you also get the first 9 or so chapters of Out of the Dark. I don't like to read a portion of a book and then have to wait 6 weeks for the actual book because I will forget details. So, .99 cents was ok to pay for what I got out of it. It was more of an advertising tease.
Read more
7 people found this helpful
Helpful
Report abuse

Paul C
2.0 out of 5 stars Way too short
Reviewed in the United States on January 20, 2019
Verified Purchase
Aurora is high school student who is an “intern” for a slightly older young man running a tabloid news website, Today’s Maximum News, a poor man’s TMZ. They spend a couple hours staking out a church that had been central to one of Evan Smoak’s missions. The rumor is that The Nowhere Man sometimes returns to scene of the crime.

Lucas is more than happy to give out advice to his intern. Some of it may be good, but it’s all laced with haughty, down-his-nose pettiness. When they decide to take a closer look and go into the church, things get a little dicey.

This story is very short. I can’t tell because of those Kindle e-numbers, but maybe 20 pages. Frankly, it’s too short, and Evan Smoak comes out looking more like a pseudo-superhero than a real-life human. Predictable plot, and a thumb-nail look into his “character.” I really like the aspect of The Nowhere Man from a different POV, but I needed more.
Read more
One person found this helpful
Helpful
Report abuse

Danielv
1.0 out of 5 stars That was a bad joke... this is no short story - just a couple of pages without content
Reviewed in the United States on December 27, 2018
Verified Purchase
I love the Nowhere Man series - but this is really bad. Actually, I am so angry, that I am thinking about not buying the next book in the series. This is not a short story - this are a couple of pages, the nowhere man, makes an appearance only at the end, says two words and the rest is a first chapters of the new book.
If you want to advertise that is fine - but do not try to sell your readers as stupid... This is a waste of money - do not buy it!
Read more
4 people found this helpful
Helpful
Report abuse

3 no 7
4.0 out of 5 stars A short character sketch from the past on Orphan X
Reviewed in the United States on January 19, 2019
Verified Purchase
“The Intern” by Gregg Hurwitz is a short story featuring Orphan X. Readers get a glimpse of “The Nowhere Man” at work through an incident from the past. Hurwitz sets the stage with anticipation and perhaps dread.
“According to the reports, a lot of people had died there.”
His reputation is legend; his existence, mysterious.
“They say this is the last place anyone saw him,” Lucas said. He never used the name, like he was afraid it was some spell that might conjure the man himself.”
Vivid descriptions put readers right into the scene.
“Yellow crime-scene tape, long dismembered by weather, curiosity seekers, and criminals, fluttered about the perimeter, snared on scraggly dead bushes like spiderweb strands. The steel front door, scorched from an explosive charge of some sort, hung crookedly from a bent hinge. The stained glass windows were blown out, pebbled glass teeth rising from the frames.”
“The Intern” is a short character sketch to fill in some history for readers of the “Orphan X” series. It is quick to read and reminds readers that it is always good to have a phone set to record when one is threatened by thugs and punks.
Read more
Helpful
Report abuse
See all reviews

The Good Read
5.0 out of 5 stars The good read
Reviewed in Spain on April 14, 2020
Verified Purchase
Second short novel about Orphan X equally as good as the first I have now got the first full length book in the series to read l am hoping it's as good l will do a full review after I have read that.
Read more
Report abuse

Dawn
1.0 out of 5 stars DO NOT BUY - Total Rip Off!!!
Reviewed in Canada on July 13, 2020
Verified Purchase
Don't buy this, you're paying for 3, maybe 4 page story. Complete and total rip off. Just spend the money for one of his full books. VERY INSULTING! Shame on you Amazon!
Read more
Report abuse

Kindle Customer
1.0 out of 5 stars Rip off
Reviewed in Canada on May 10, 2020
Verified Purchase
Yeah it's a short story but 10 pages?!?! The remaining 80 pages are preview of another book. This is a total ripoff.
Read more
Report abuse

Yim
3.0 out of 5 stars Short
Reviewed in Canada on December 3, 2019
Verified Purchase
Way too short would be better if it was 3 times as long .disappointed .could be a lot better too
Read more
Report abuse
See all reviews
Back to top
Get to Know Us
Make Money with Us
Amazon Payment Products
Let Us Help You
EnglishChoose a language for shopping. United StatesChoose a country/region for shopping.
© 1996-2022, Amazon.com, Inc. or its affiliates