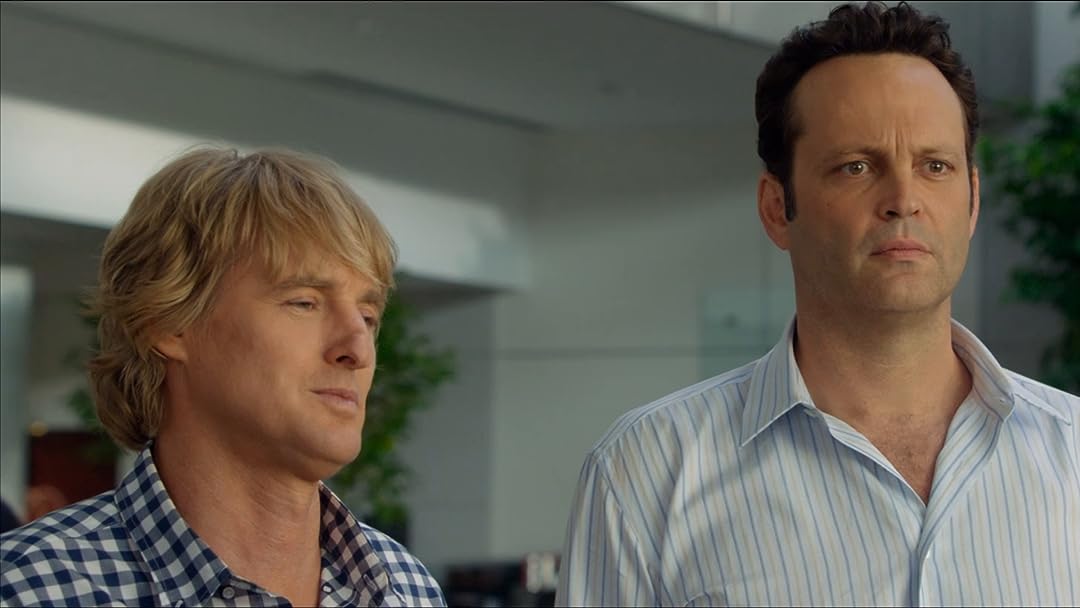 Cord Kirshner RNReviewed in the United States on June 17, 2018
2.0 out of 5 stars
Flat script for a talented cast
Verified purchase
Unsuccessful attempt to recapture the smart and funny chemistry of Wedding Crashers. A lot of snare drum ‘bah dum da’ then crickets. Will Ferrell’s cameo role was a caricature, which is really too bad considering his comic genius. Do Vaughn and Wilson even like each other when it was filmed? Seemed so in Wedding Crashers, though this installment feels more like contract fulfillment. I really, really wanted to like this movie but it lacking even just one line or scene worthy of cultural lexicon. Sadly, neither Vaughn nor Wilson played like champions here.
3 people found this helpful

joel wingReviewed in the United States on May 14, 2021
3.0 out of 5 stars
Predictable but still funny
Verified purchase
Owen Wilson and Vince Vaughn are 30s something salesmen whose company went under. They get internships at Google where they’re dealing with people a generation younger. The movie is a buddy comedy making fun of them being out of place in their new environment. The story is completely predictable so the question is could they make you laugh along the way? The answer is yes. Will Farrell makes a cameo and is hilarious as usual. Vaughn and Wilson maintain their chemistry that they’ve established over the years. Vaughn really runs away with the show with his gift for gab and his charm.
One person found this helpful

John CooleyReviewed in the United States on April 21, 2021
1.0 out of 5 stars
crap, stupid....first time I tried to use amazon's refund on accidental purchase's it didn't work.
Verified purchase
I was viewing this and rented it by mistake because i had two windows open. I love Dylan O'Brian, but i never even made it to his part in the movie. It started out super slow and with a crap storyline. It is suppose to be a comedy but I didn't have one laugh in the maybe 20 mins I watched (only because i couldn't get the refund option to work) then I stopped the movie. If I could get a refund I would I say no to this movie. I regret the 3.99 and the time wasted and I typically love this type of comedy. Save your money. I would rather watch dogs poop that watch this thing.

FinReviewed in the United States on June 22, 2021
1.0 out of 5 stars
Too many creepy cringey scenes
Verified purchase
I love these guys in lots of movies…But this movie was very hard to get through. It’s a never ending spin cycle of over used greeting cards, memes, and cliches with regurgitated inspirational speech spasms ….it’s just been done too much… I was also soured a bit by two 45 year-old men having cringy interactions with a bunch of kids. Don’t get me wrong… Got to respect these actors for putting Coin in the bank….

electoblazeReviewed in the United States on October 28, 2015
4.0 out of 5 stars
Barebones Comedy
Verified purchase
I watched this movie for a psychology class with no knowledge of it at all except that it's about a google internship. The movie is actually really lighthearted, entertaining and genuinely touching at some points. In that regard, if you want to watch a random comedy with the family then this would be a good option. However, with that being said, make sure you get this straight: it's definitely an advertisement for Google and I completely agree with other reviewers here how strange that they can make a movie out of what is essentially a long commercial for Google. It's plainly a cutthroat internship movie and if you were expecting any plot twists or turns you will be disappointed. It's a simple comedy for the family with a predictable ending.
One person found this helpful

Richard C. ZellReviewed in the United States on October 1, 2020
3.0 out of 5 stars
NOT multi-format!
Verified purchase
I bought this thinking it would be a great deal, because it’s a good movie to watch when the mood strikes. This review is based on the fact that the product is listed as multi-format, and is just the blu-ray. I just received my amazon package and opened it, and the picture attached is what I got. I was hoping I’d get a multi-format to be able to add this to my digital collection as well, but got this instead. It’s still a decent deal for a Blu-ray disc, but they’re falsely advertising it as multi-format, which led to me to this 3-star review.

Caroline WriterReviewed in the United States on November 6, 2013
5.0 out of 5 stars
Slight Spoiler In This Review: Great and Mostly Accurate portrait of Google! (Reveiw from a Woman's Perspective)
Verified purchase
I worked at this Google location as a contractor for a year. I loved it, and the movie brought back great memories. The story was fun and sweet-natured. The only issue I had was that, thankfully, Google does NOT pit its employees or interns against each other in competitions. [Okay, I could have done without the strip club too (perhaps if men had to sit through movies watching half-naked men dancing around, they might understand why its a bit awkward and out of place?--or at least give women equal cheap thrills? ) still I have to admit there was one scene involving a young guy's reaction to the strip club that I almost fell down laughing over! ]
What I loved about this movie the most was the mentor-like relationship between the two men and the younger coworkers that eventually developed. It was so positive and sweet. Who wouldn't want these guys at their company? It was kind of depressing also that there was only one woman on the team, (which, sadly, reflects my experience at Google Engineering and other Silicon Valley companies) but it was awesome that she was treated respectfully and the only dating that went on was between similarly aged characters (for a change!)
4 people found this helpful
See all reviews
Back to top
Get to Know Us
Make Money with Us
Amazon Payment Products
Let Us Help You
EnglishChoose a language for shopping. United StatesChoose a country/region for shopping.
© 1996-2021, Amazon.com, Inc. or its affiliates