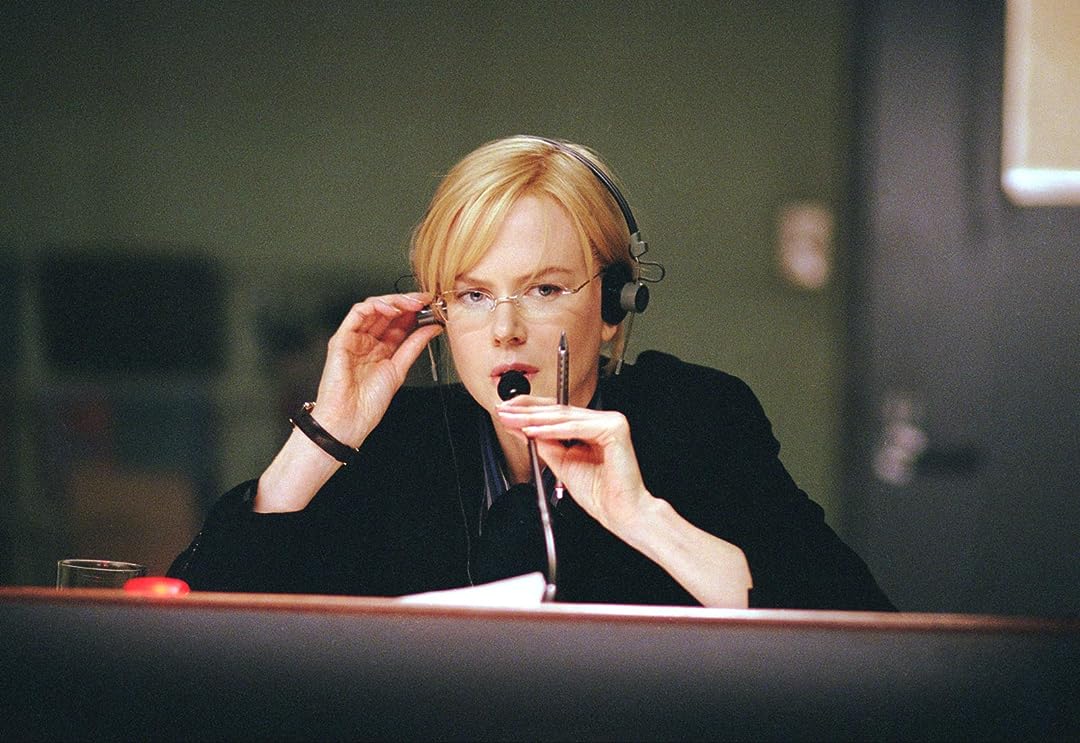 (878)6.42 h 8 min2005X-RayPG-13
An interpreter for the United Nations overhears an assassination plot against an African dictator and enlists the Secret Service to investigate her claim.

joel wingReviewed in the United States on April 27, 2020
3.0 out of 5 stars
Good political thriller surrounding an African dictator and a plot on his life
Verified purchase
Nicole Kidman plays a United Nation’s interpreter who is drawn into a political thriller when she overhears men discussing assassinating the blood thirsty dictator President Edmond Zuwanie of the fictious African nation of Matobo. That makes her a target for the plotters. It turns out that Zuwanie is going to appear at the United Nations to give a speech very soon. The case is investigated by the U.S. Secret Service agents Tobin Keller (Sean Penn) and Dot Woods (Catherine Keener).

The movie starts off as an investigation by Keller and Woods and then turns into an action movie. There are chases, a terrorist attack and more. The one problem is that they form a relationship between Kidman and Keller which was predictable and completely unnecessary. Besides that this was a very good film about political intrigue.
C

Student for LifeReviewed in the United States on April 18, 2021
4.0 out of 5 stars
Pretty good.
Verified purchase
Nicole does a great job here and seeing Sean Penn is kind of nice because I like his acting. The plot is pretty good but does not deserve 5 stars. Still, I watched the movie 3 or 4 times and would watch it again. An interpreter at the UN hears that the cruel dictator of an African nation will be assassinated during his scheduled speech before the UN. However, things take a sharp turn when she becomes the main suspect of such assassination due to her earlier involvement in trying to remove the dictator from power.

Wendell HollomanReviewed in the United States on July 20, 2014
4.0 out of 5 stars
A solid four star movie
Verified purchase
Filmakers today should take some of the principles employed in developing the plot in this movie "The Interpreter," and apply them to movies that come out these days. Obviously the director was influenced by some of the great masters of suspense like Alfred Hitchcock or Terence Young ("Wait Until Dark") to name just a couple. And in turn the director of this film himself takes his place alongside these luminaries.

Having a great cast, solid plot development, suspense, and great character development made this film a very satisfying viewing experience. Also the film lets the viewer have a peak at the social and economic conditions in another part of the world that they may not be living in. This is a great element to include in a film from a "Human Interest" perspective and increases the film's overall impact. Again, great cast. Ms. Kidman, and Mr. Penn did a great job. I especially like Ms. Kidman's performance of an Africaaner accent. It sounded perfectly normal and not at all as if she were "doing an accent" and not quite nailing it. Which is something else missing in alot of today's movies. Some actors although good actors just don't have the getting a particular accent down thing together.

A solid four star movie! I enjoyed it!

toReviewed in the United States on March 12, 2018
2.0 out of 5 stars
Bad Racial Casting
Verified purchase
Its a story about Africa and all the good guys are white and all the bad guys are black. A missed opportunity for Hollywood.
7 people found this helpful

dansedufeuReviewed in the United States on January 12, 2020
5.0 out of 5 stars
Sean Penn, Nichole Kidman
Verified purchase
This is an excellent movie. The characters are complex and each is dealing with loss and demons. I wouldn't have watched it if I hadn't looked at the preview. The stars are not listed in the overview! A good "Friday night in" flick.

IRISH KATHLEENReviewed in the United States on March 3, 2018
5.0 out of 5 stars
Awesome film. The way the two lead characters
Verified purchase
Awesome film. The way the two lead characters, Penn and Kidman, portrayed their underlying attraction tension was amazing! It added to the suspense of the film and portrayed so well the "trauma bond" these two characters shared albeit via very different life circumstances.
Wonderful and incredibly heart-wrenching story about Africa and the exploitation of people via politics, resources, and greed.
I really came to appreciate Sydney Pollack the director/actor (of this film) after seeing this film.

Carol MelloReviewed in the United States on September 21, 2007
4.0 out of 5 stars
surprisingly good
Verified purchase
I saw this movie at the end of its run in the movie theaters. My husband & son were not interested but I was intrigued by the reviews I had read so I went by myself. I do not care for gratuitous violence in movies. A really good movie, in the opinion of the men in my life, must have a violent death in the first 60 seconds and 25-30 violent scenes total -- car crashes, murders, blown up buildings, fight scenes. There is violence in this movie but it is not gratuitous and I found the movie much less violent than I expected. An explosion and murders occur but they are the type of violence that would happen if this film was relating a real life African political intrigue. The African political situation at the core of this movie is plausible which is more than can be said about the plots of many other movies. I thought the screen play for this movie was both well written and true to life. (I don't mean to imply implausible is the necessarily the same as bad-- some of the best movies ever are completely implausible.)

Nicole Kidman's character, a UN interpreter who is expert in African dialects, returns to her booth to pick up an item left behind. The UN floor appears to be empty but she inadvertently overhears a conversation about a planned assassination of the current leader of an African nation , a man who is due to make an appearance at the UN. The African nation is the one in which her family lived; she grew up there. She reports the overheard conversation to the FBI. The FBI, especially a grieving agent played by Sean Penn, does not believe her. They investigate her and find in her past life in Africa many reasons to doubt her story. However, they must investigate the planned assassination anyway even if they think it is bogus. It soon becomes clear as unexpected (some violent) events begin to take place surrounding the interpreter that something is going on although the FBI agent played by Sean Penn is unsure whether it is a real African based assassination plot or the interpreter reported the conversation to throw off suspicion from herself for something she is planning. At the same time, he finds himself drawn to her, the first woman who has interested him since the death of his wife. Nicole Kidman brings to her role the sort of class and reserve one would imagine a UN interpreter to possess. I found Sean Penn's tortured FBI agent portrayal sympathetic and very Sean Penn-ish. (I must admit I do not believe FBI agents are really so dishevelled looking. Perhaps I am just assuming as truth that FBI agents are "men in black.")

I enjoyed all of the plot twists (there ARE many) in this story, the unfolding of the mystery behind the overheard conversation, how it relates to the interpreter's past, the rise and fall of leaders in the African nation. This story was more layered than most thrillers (I have seen them; one can't help it with the men in my life). I would not call it a thriller at all, but a political mystery. It's a very good mystery movie and an unusual one. The movie is set in New York City and partially in Africa. The movie addresses political corruption and legal ethics (which crimes might be justifiable, which crimes should be punished). The UN scenes are fascinating to someone (like me) with an interest in world politics. If you have such an interest too, you may enjoy this movie as I did.

BTW on nit-picking reviews: I have noticed some negative reviewers who have nit-picked the movie to justify their thumbs down for it (one review: chess board mistake, "booger" sighting). My husband, too, likes to pick out nits in the movies he did not like. Recently, I have been drawing his attention to the nits in the movies he loves: a little reminder that there are unbelievable situations and errors in his favorite movies too. His attitude is "so what?" I guess we honestly do not mind nits in the movies we like and they loom large and overwhelming in the movies we hate. And then there are the movies that are so bad, no one likes them! Still I would like to see negative reviews that explain more fully why the reviewer did not like the movie. It would be more helpful to amazon customers.
3 people found this helpful
See all reviews
Back to top
Get to Know Us
Make Money with Us
Amazon Payment Products
Let Us Help You
EnglishChoose a language for shopping. United StatesChoose a country/region for shopping.
© 1996-2021, Amazon.com, Inc. or its affiliates