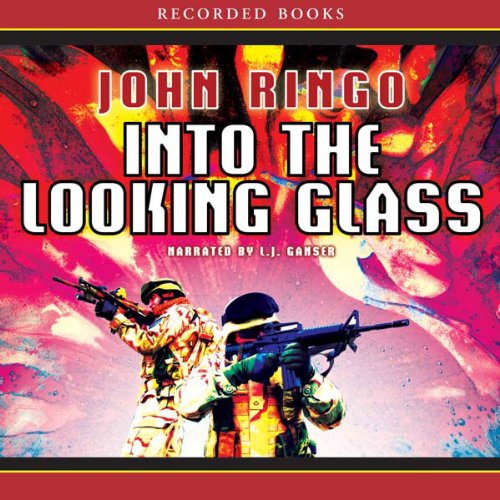 When asubatomic physics experiment causes a massive explosion, interdimensional gateways open in Florida - and aliens pour out. Some intend to bring Earth to its knees. Others seem willing to help, but will annihilate the planet if Navy SEAL Command Master Chief Robert Miller can't stop the menace from spreading.

Your audiobook is waiting!
Learn more about membership
List Price: $27.99
You Save: $4.04 (14%)
By completing your purchase, you agree to Audible’s Conditions Of Use
Sold and delivered by Audible, an Amazon company

Allen W. Mcdonnell
5.0 out of 5 stars Great fun, interesting characters.
Reviewed in the United States on January 11, 2022
Verified Purchase
If Wesley Crusher had been born in 1980 he could have been the main character in this novel. Scary smart and willing to look at new opportunities and threats from a completely outside the box direction.
The looking glass portal accidentally formed on the first page of the novel leads to another world. Unfortunately it is not the only portal opened, and some of the portals lead to serious problems that have to be solved right away.
Great fun, I enjoyed it so much I bough book two as soon as I finished this one.
Read more
One person found this helpful
Helpful
Report abuse

Virginia Dad
5.0 out of 5 stars A fun and engrossing romp--good escapism
Reviewed in the United States on December 4, 2019
Verified Purchase
This was a fun read. I've read it twice now and watched my teenage son devour it as well. Buy this book if you like military sci-fi and like having science mixed expertly with with fantastical elements. The plot is fun and fast paced. Some folks have taken issue with the '50s-style protagonist (has all the answers and can do everything) but that misses the point. The protagonist is also the source of explanations for what is going on and if he weren't super-capable, it would be hard to explain his presence through all the key moments of the plot, which is about an alien invasion. Ringo kept the focus small and the hero isn't an all-powerful Doc Savage-type. He gets hurt and makes mistakes. If you take it for what it is - an action movie in prose form, then you'll enjoy this book.
Read more
One person found this helpful
Helpful
Report abuse

Grant Reed
3.0 out of 5 stars Interesting enough, a bit rough around the edges.
Reviewed in the United States on December 30, 2013
Verified Purchase
I actually enjoyed this book, but it was difficult to get in to, initially at least, for me.

I've read other reviews, and a lot of them stated that it started off great, a science experiment gone wrong, resulting in a near nuclear explosion that caused the death of only 150,000 people or so, in the heart of Florida. The explosion though, or something associated with the experiment, caused the opening of gates to other places, meaning not earth. This is soon followed by an alien invasion. To me, the start was not fantastic. The premise was decent, and in keeping with classic science fiction.

The invasion is fought initially by the available U.S. military units, starting with the national guard, and proceeding to regular army, and special forces units. Eventually, citizens that like guns get involved. From there, the U.S. government is trying to correct or contain the problem. But it keeps expanding. They call up on William Weaver. Doctor William, or Bill, Weaver is a scientist, who has multiple degrees, and an athletic background, that just so happens to work for a company that does military contracts, and because of that, he has top secret clearance.

There also happens to be a number of military personnel that know a lot more about science than would normally be expected. The ones that know the most, just happen to be science fiction fans. These people just happen to be at the right place at the right time. It must also be stated that the majority of the effective defenders and characters tend to be politically conservative in view point.

The gates, start appearing, at other locations. The U.S. Military is called upon several times to defend the country on its own soil. Dr. Weaver calls upon his company to release a Top Secret project to fight the threat of the invaders, a project that is basically mechanized battle armor.

There are a lot of stereotypical plots devices in Into the Looking Glass; science experiment gone wrong, teleportation gates, alien Invasion, seemingly larger than life hero, mechanized battle armor, and eventually what may be termed a deus ex machina to resolve the primary storyline. The battle sequences are not as well thought out as many other such sequences in other Ringo Works, and really tend to be much more like a video game than an actual battle, in this case something along the lines of DOOM or Duke Nukem. These are weaknesses to this story, in my opinion.

However, I think Ringo did a really good job in laying the groundwork, or at least some background, to his "Looking Glass" series. It is not truly necessary to read "Into the Looking Glass" to get into the series, but it was a moderately successful attempt at the reasoning, as well as a good introduction to at least one primary enemy.

This is basically a classic SF piece, hearkening back over the decades, whose primary audience is the Science Fiction community. It takes a number of stabs at Ringo's particular soapbox, liberal and/or progressive politicos, so if you hold those tendencies, you will feel insulted in several instances.

Sean Carr
5.0 out of 5 stars A great book
Reviewed in the United States on October 2, 2020
Verified Purchase
If you are a fan of military sci fi then John Ringo is your man. In my opinion he is one of the best. He was a 82nd airborne mortar man in the Army so he gets the military aspect right. He is a intelligent guy with a lot of varied experience across the board and whatever he doesn't know or understand he uses many friends who are specialists in their respective fields as technical support. He even is known to reach out to his fans for research into whatever topic he is working on for a book. Into the looking glass is a fun start for this series and it is filled with plenty of both action and hard science. You don't need to be a physicist to enjoy this book but it doesn't hurt. I am not one myself but I still understand the basics and his writing style doesn't make you feel stupid when he gets into the more hard science aspects of the book. Overall its a fantastic and intriguing read that like all of his books, makes you want more.
Read more
Helpful
Report abuse

P. Mattingly
5.0 out of 5 stars Somewhat silly, very engrossing
Reviewed in the United States on February 3, 2020
Verified Purchase
I love Ringo. And Travis lends a hard science gravitas to Ringo's occasion over the top prose. This is a great series of you enjoy sci-fi and military fiction. Not too hardcore, not bogged down in description. Plenty of comedic relief without becoming ridiculous. Great character development and characters who remain true to themselves. Also doesn't take itself too seriously which makes for a fun, serious, scientific, read.
Read more
Helpful
Report abuse

HFlair
5.0 out of 5 stars Great read, great characters and a great work to be done
Reviewed in the United States on October 20, 2020
Verified Purchase
Like all of John Ringo`s books i found this book/series to be well-written story lines with hard science and interesting characters,
This is my third time through this series and I find more in it each time, he reminds me a lot of my favotite authors o er the years--Heinline, Assimov, Anderson and others, too many to list. I have read hard Science Fiction for 70 years. You re one of the best, thank you for many wonderful reads How would our world repulse hostile invaders we cannot even understand?
Read more
Helpful
Report abuse
See all reviews

John O'sullivan
4.0 out of 5 stars Loopy, but fun!
Reviewed in the United Kingdom on May 5, 2015
Verified Purchase
Where to start? Well, it's daft! 50s style boys adventure stuff like doc smith or the heinleins juveniles. But with the added bite of accurate cutting edge physics. The hero is just simply too all American square jawed patriotic beer drinking athlete to appeal to many out side the fishbowl of the good ol' U S of A.
The plot is based on a possible side effect of wormhole research gone wrong and it ambles on into a military dash for supremacy against aliens with better tech. The right wing politically driven narrative doesn't bother me as I'm apolitical and a practising member of the church of FSM, but I can see how it rubs some of the other reviewers up the wrong way, lol.
Overall another good, not great, addition to Ringo's growing list of entertaining fare. Favourite part has to be the charge of the redneck brigade!
Read more
One person found this helpful
Report abuse

Amazon Customer
5.0 out of 5 stars a ringo classic, all the ringo traits
Reviewed in the United Kingdom on June 22, 2014
Verified Purchase
Mix navy seals, nuclear weapons, aliens, worms holes and john ting and you are sure to be for a great ride. Doesn't disappoint!
Read more
Report abuse

OJ
5.0 out of 5 stars Good stuff
Reviewed in Canada on August 7, 2019
Verified Purchase
Bit annoying that the author hates everything not american though. Bit more annoying that he doesnt seem to be aware of a planet outside of the borders of USA.