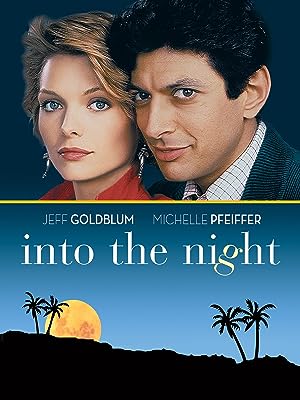 (678)
6.41 h 54 min1985R
When two strangers (Michelle Pfeiffer and Jeff Goldblum) meet in the middle of a Los Angeles night, anything can happen...and does, in this zany comedy directed by John Landis.

SciFi-Kaiju-Guy @ TeePublicReviewed in the United States on November 11, 2017
5.0 out of 5 stars
This terrific, offbeat noir-ish comedy gets a hi-def makeover on this new Blu! Get ready to go INTO THE NIGHT like never before.
Verified purchase
BOTTOM LINE: One of the best quirky comedies ever made; still fun & funny after 30+ years! Plays like a screwball comedy, with noir-ish overtones. Goldblum & Pfeiffer make a great couple with genuine chemistry. The story keeps you moving briskly along from one odd situation to another without ever running out of steam. A terrific bluesy soundtrack adds color and character to the proceedings. This Shout!Select hi-def Blu-ray gives fans even more for their buck besides improved audio & video, as it includes some decent bonus content, too. 5 STARS

THE STORY: Ed Okin can't sleep. Late one night he goes for a drive, idling aimlessly around L.A. before eventually ending up at the airport. There he encounters Diane, a beautiful but mysterious girl who's running for her life from four Iranian assassins hell-bent on recovering six perfect emeralds she smuggled into the country. From that point on the two pinball from one bizarre encounter to the next, trying to stay one step ahead of the killer quartet. Can Ed keep Diane safe? What will happen to them both? And will poor Ed ever be able to get a decent night's sleep?

THOUGHTS: I have loved this movie ever since I first saw it on cable TV decades ago. Prior to this movie I had only known of Goldblum from his short-lived TV series, TENSPEED & BROWNSHOE, with Ben Vereen. He was so memorably off-kilter in that show that I knew I had to check out INTO THE NIGHT. This movie has so much going for it. Great lead actors, a bevy of cameo parts by Hollywood directing legends, off-the-wall situations, and a surreal trip through the glamorous yet seedy afterhours world of Los Angeles. A wonderful B.B. King-flavored blues soundtrack adds immeasurably to the overall product, so much so that I couldn't imagine liking this film anywhere near as much if it had a more traditional score. And at it's center, a smart and witty script from Ron Koslow. Director John Landis steers things deftly, and also gives a side-splitting slapstick performance as one of the Iranian hitmen. I honestly find it amazing that this film isn't more well-known and well-loved. It is so much fun to watch unfold. Do yourself a favor and go along for the ride.

THE BLU-RAY: A nice offering from Shout!Factory's Shout!Select branch. A nicely remastered transfer gives the film a new life. The picture looks crisp & clean and the audio is likewise clear, with a fairly even soundmix. Extra goodies include separate new on-camera interviews with director John Landis & star Jeff Goldblum, (wherein you can clearly see that Goldblum's iconic stumble-mumbly, stop & start acting style isn't really acting; he's just naturally that strange & scatterbrained. LOL). There's also a short but entertaining documentary about B.B King and his life and involvement with the film. I wished that Landis and or Goldblum had done a commentary but alas, it wasn't meant to be. It's also regrettable that Michelle Pfeiffer couldn't or wouldn't be interviewed about her memories of the film. Even without, this Blu-ray is a solid buy for fans of the film and comes highly recommended.

david reardonReviewed in the United States on March 24, 2021
4.0 out of 5 stars
Great film - DVD version video could have been better.
Verified purchase
This film is a must see underrated film. Would have gotten five stars out of five were it not for the slightly dark and grainy replay of the DVD version. This film takes place largely at night ( hence the title ), but If you adjust your televisions brightness the limiting darkness of the DVD version of film is abated. I saw this one in the theater and have seen it on television, so I know that the replay on the DVD was of lesser quality than the theatrical or television playback. As for the grain, you quickly get used to the look as it is only in scene that take place out of doors. As for the film, the story is solid, the acting is superb, and the overall feel of the film is fascinating and engaging. The cast is a sweet mix of known and character actor stars, Hollywood insiders, as well as famous film directors from the 1960's 1970's in bit roles. You see David Bowie play an enigmatic assassin, Carl Perkins play a southern drawling body guard to a spoiled insipid Persian royal, Rick Baker play a fast talking drug dealer, and Roger Vadim play an offbeat French weirdo. There are many other film directors in key and bit roles, but Vadim gets most of the camera time ( next to Paul Masursky ). All play as well crafted addendums and framework for Jeff Goldblum and Michelle Pfeiffer's visible chemistry. The dialogue is sharp and witty ( without being snarky ), while still coming off as natural and unforced. You quickly get to know the characters without unnecessary exposition. This is due to the class and skill of the actors, as well as the keen and insightful direction of John Landis. And as with other films that Landis directed, the humor is sometime subtle and sometimes slapstick - without being overt or artificial. Landis himself is one of the highlights, playing a cameo role as a Persian assassin with a penitent for western spoils and excess. He is also remarkably capable as a comedic actor without uttering any coherent dialog. All in all this is a great film that has a solid and loyal following for very good reason.
One person found this helpful

Vince M. BarronReviewed in the United States on April 28, 2018
5.0 out of 5 stars
One of John Landis' Best films
Verified purchase
This is great homage to Alfred Hitchcock. Good, fun film. One of John Landis' best films. Throws you into the eighties time machine for sure. I love the extras that come with the movie. B.B. King and Ira Newborn created the score for this movie. It's amazing!
8 people found this helpful

Kent A. LarsonReviewed in the United States on October 11, 2021
4.0 out of 5 stars
There's just some times when you need to take the drive with Jeff.
Verified purchase
Cult classic? I'm not sure that completely describe this movie but it could. The emotional rollercoaster of the character, the everyman feel of his angst, and the nicely done conclusion are a cathartic experience that pilgrims should digitally travel through at least once every five years or so.

A young Jeff Goldblum and a very young Michelle Pfeiffer make for a great duo in this dark-comedy, drama, and blues riff movie. BB King's song says it all.

Steve M.Reviewed in the United States on February 1, 2019
4.0 out of 5 stars
Under-rated and under-appreciated, quirky, different, fun
Verified purchase
If you're into the usual mainstream fluff and the constant flood of comic book hero movies, you may not like this. It wasn't popular or highly reviewed when it first came out. But if you're looking for something a little different, this may be the ticket. It's not superb, but it's definitely enjoyable. Jeff Goldblum and Michelle Pfeiffer are hard to beat and make an interesting team for one zany night in L.A., and others in the cast (David Bowie, for one) are very good, too.
One person found this helpful

casey679Reviewed in the United States on October 26, 2018
5.0 out of 5 stars
An underappreciated cult classic
Verified purchase
Written off in its time, this movie is a hidden gem. Michelle Pfeiffer and Jeff Goldblum deliver solid performances (and this was back when Jeff Goldblum still created different characters for each role) in a dark comic chase movie with a surprisingly high death count. Goldblum's monologue at the end remains one of my favorite moments to date. Tons of cameos from the directors, writers, and other folks make this film extra-fun.
2 people found this helpful

M. D. WallaceReviewed in the United States on November 12, 2017
5.0 out of 5 stars
So glad to see this on Blu Ray
Verified purchase
I love this movie... one of my all time favorites. Don't know what that says about me.... I was hyped to see this was coming out on Blu Ray. I always thought I'd be stuck with only a DVD version forever, but here it is. Awesome as I remember, but looking much better.
4 people found this helpful
See all reviews
Back to top
Get to Know Us
Make Money with Us
Amazon Payment Products
Let Us Help You
EnglishChoose a language for shopping. United StatesChoose a country/region for shopping.
© 1996-2021, Amazon.com, Inc. or its affiliates