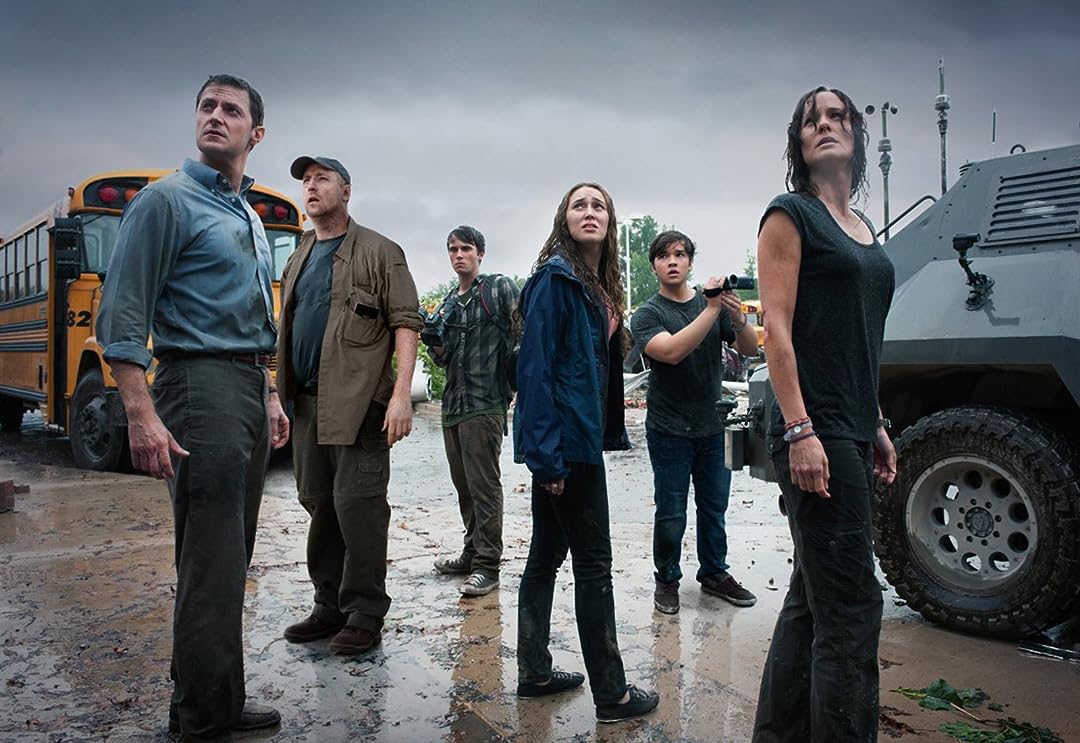 (5,506)5.81 h 29 min2014X-RayR
In the span of a single day, the town of Silverton is ravaged by an unprecedented onslaught of tornadoes. The entire town is at the mercy of the erratic and deadly cyclones.

AthansorReviewed in the United States on January 6, 2018
1.0 out of 5 stars
Lousy green screen work, lousy acting—I couldn’t watch past the first 10 minutes of this film!!!
Verified purchase
The trailer looks promising...the movie itself, however, is so full of bad actors and REALLY unrealistic green screen work that I don’t think I lasted 10 minutes, before turning it off.

And when I say “unrealistic green screen work”, I’m not talking about the weather stuff—I’m talking about things like people in houses, people in vans—where you see REALLY sharp delineation between them and the “room” they’re in, or the road they’re “driving’ down. Bad, like...oh, way back in the day, on Saturday morning kid’s shows, kind of bad. Where the actors are all sharp and crisp and have one kind of post-processing and lighting on them—and the background is entirely different.

In this day and age, where even cheap effects on your smartphone look quite good—this was downright embarassing. I kept looking at the release date in disbelief—because it seemed like something that would’ve been done for 70s tv.

And the acting? Ugh. Maybe there ARE some good actors in the show...but it didn’t show in the first ten minutes. :/

So what’s with all the good reviews?

Beats me. I mean, I’m a fan of dance movies: there are a TON of bad dance movies out there, but I’ll suffer through the bad acting and hackneyed plot, because, I’m basically watching it for the dancing...but I still KNOW they’re bad movies!

I also love me some natural disaster movies...but I guess not as much as bad dance movies, because while I’ll tolerate a trite plot, as long as the actors and special effects are good, I apparently won’t tolerate lousy green screen work or bad acting.

I can’t describe the storm special effects, because I didn’t get that far—but they did look promising in the trailer, so if you’re not picky about acting and green screen work and writing, as long as you get to see cool effects—maybe you’ll enjoy this film.

If, on the other hand, you expect a polished package with your special effects—at the very least, some reasonably good acting—move long: these are not the droids you’re looking for!

MindlessGonzoReviewed in the United States on October 15, 2016
3.0 out of 5 stars
Good for Normal Entertainment, Kinda Poor In The Realism Department
Verified purchase
I love movies and I like watching storm chases. The problem is the writing feels bland and the characters are hard to relate. Almost cookie cutter. The footage is way too consistent and smooth (what Iphone or cheap security cam captures in IMAX-like quality?) to give that found footage feel. The storm chasing aspect feels completely wrong, only getting an internal shot for fame (but then again you got IMAX film director Sean Casey who wanted to do just that) and the family aspect feels more like walking cardboard cutouts.

The only thing I can praise is the special effects. It's rare to get a twister on screen to look that good. I went through a handful of cinema and made-for-TV movies with tornadoes and the only ones that were close to real were Twister, Oz The Great and Powerful, and The Day After Tomorrow. I love the detail put in to make the damage real. It did throw me off to see an airport destruction scene (what's it doing there anyway?) but still, I gotta give props to the CGI team.

It's a decent watch just for entertainment purposes alone. Just don't expect story depth besides a single parent family, fame hungry chasers, and a bunch of drunk rednecks that appear for no apparent reason. And the occasional airborne cow.
2 people found this helpful

Cheryl BoelterReviewed in the United States on February 14, 2020
5.0 out of 5 stars
Suspenseful!
Verified purchase
Other than some "Hollywood additions", this was the most accurate detailing of conditions during these horrible storms. I've not heard of 4 funnels on the ground at one time, nonetheless, the accounting of damage and 'firenado' that consumed that poor young man, those are entirely possible.
A bit extreme, where the tank-Titus?, went up into the vortex, and the brilliant light was acknowledging imminent death with glorious beauty, that scene stayed with me for a long time.
Truly unexpected and so glad I purchased it as I will watch it many times over.
Thank you for a great movie!

Retired Soldier/Sailor.Reviewed in the United States on January 9, 2015
4.0 out of 5 stars
Crank up the volume to match the brain-freeze action!
Verified purchase
Great work-out for your 5.1 Surround System! It starts out a little calm...
but, a few minutes later, it sucks you up... gets REALLY loud [and bassy]...
then it spits you out... into a tree.

The armored Titus storm-chase vehicle was specially made for this movie,
and, the C.I.C.-van was even cool. Since this movie features e-v-e-r-y,
single, KIND of tornado, you might just find this chart helpful:

Bettina SipeReviewed in the United States on November 2, 2014
4.0 out of 5 stars
7.5 out of 10
Verified purchase
I have been a fan of tornadoes for a long time. I thought this movie was pretty good, except for a few things. At some points, the acting isn't great and the dialogue can be a little cheesy, such as "This is the largest storm that's ever been!". I also thought that the movie could have been longer. But the special effects are incredible and the tornadoes are amazing!
I also like the little references and similarities to Twister from 1996, which include the multiple vorticies encircling the cast, the tornado in the beginning taking place at night and is barely seen, the large F-5 tornado at the end, and one that I missed the first couple times I watched it: when the view changes from the news feed of the two massive tornadoes converging, and after Pete says, "This is the largest tornado I've ever seen," and when it shows the tornado tossing debris ahead of them, you can see a fake cow come flying off of the roof of what I assume is a dairy product manufacturing building. However, nothing will ever be better than Twister.
I give Into the Storm about a 7.5 out of 10.
20 people found this helpful

MelissaReviewed in the United States on May 23, 2016
4.0 out of 5 stars
Pretty good
Verified purchase
Incredibly unrealistic and graphics for its time aren't what they could be. I also could have done without the "funny" part as it really didnt fit into the mood of the movie one bit and was more annoying than actually funny. BUT with that being said, the plot is exciting and it will have you at the edge of your seat the whole way through. It brings any tornado nightmare you've had to life. Imagine escaping a tornado, thinking you're in the clear, only to be faced with yet another tornado. I won't say more because I obviously don't want to ruin anything. But if you can get passed a few cheesey parts, and you can appreciate the fear the writer is trying to instill into the audience, you will like this movie.
One person found this helpful

JEROME W, MARTINReviewed in the United States on November 21, 2014
3.0 out of 5 stars
GOOD STORMS; BAD STORY
Verified purchase
This film seems like a sequel to Twister; Very good tornado effects, nice crunching of buildings, trees and autos, but an awful story
around crappy storm chasers and smart mouth kids. Much of the film was from the kids video cameras, with the pictures bouncing
around like a LA earthquake. But the visuals were state of the art with lots and lots of tornados of various types. The finale tornado
however looks kind of phony. Still most of the scenes were quite well done and creepy. Its ok to watch as long as you don't take
the actors seriously. The wobbly camera shots were reminiscent of CLOVERFIELD but that movie had a better story line. I give this
"masterpiece" three stars for the fine special effects; a good story would have gotten it 4 or 5 stars because I am fascinated by
tornados growing up in the Mid West. I never saw one though my family members did. So enjoy the effects and heck with the rest.
I got my DVD from Amazon as usual.
4 people found this helpful

V Alison FlemingReviewed in the United States on November 23, 2020
3.0 out of 5 stars
Attn Disaster fans
Verified purchase
This movie is about new tech for storm chasing. Unlike too many of these films, INTO has an interesting back story that keeps things moving. A pretty good cast. It has lots of excitement. It even has some screwball danger from 2 idiot brothers that bring lots of humor with their crazy attempts at dangerous tricks. ENJOY!
See all reviews
Back to top
Get to Know Us
Make Money with Us
Amazon Payment Products
Let Us Help You
EnglishChoose a language for shopping. United StatesChoose a country/region for shopping.
© 1996-2021, Amazon.com, Inc. or its affiliates