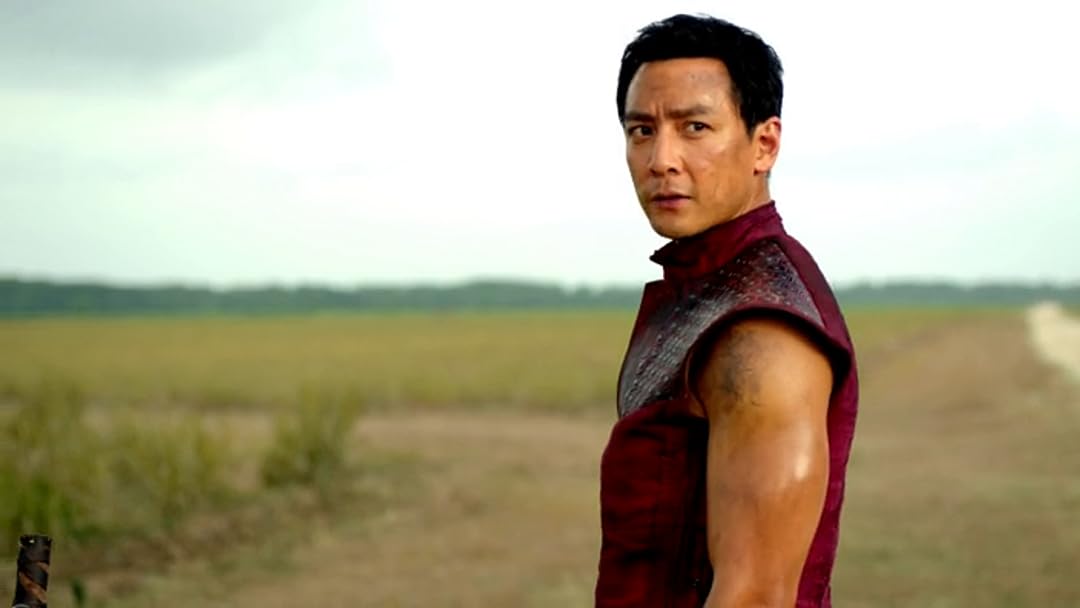 (575)8.02015X-RayTV-14
Into the Badlands is a post-apocalyptic martial arts drama in a world without guns and fighting is an art.

A.S.Reviewed in the United States on November 27, 2017
5.0 out of 5 stars
Exciting and original show
Verified purchase
If you're a fan of action, suspense, supernatural elements, drama, martial arts, or all of the above, you'll probably like this show. It takes place in an AU kind of post-apocalyptic future, where Barons (essentially slave owners in some cases) control divided up territories of land and war with each other over control. The lower classes have very little freedom and choices- most either work in the fields or become soldiers in their baron's armies, but let's just say not the typical fighting style of a soldier.

The lead, Daniel Wu, was a great choice. It's nice to see an Asian male lead, too. The actors are all talented. My favorite character besides the two mains is the Widow- you'll figure out why if you try the show. There's strong women in this show, it's far from being all male dominated. Lots of kicking a** and it's a very original take on the genre. It might seem like the post-apocalyptic thing has been overdone but this is like nothing I've ever seen in the genre before.

tim huxollReviewed in the United States on July 8, 2020
5.0 out of 5 stars
being the 1st of three
Verified purchase
i finally got this on bluray typical noticeable improvements in sound plus video but the story is in the near future or the just reimagined past the action is typical of madmax violent crazy martial arts better than most not dull but take it slow this morsel is packed with twists that your gonna miss if you don,t absorb what is going on because part two does nothing to help it only moves on if your not rooted in the story you will only get the action and none of the drama oh yes there is a part three good hunting
One person found this helpful

MovieskinnyReviewed in the United States on December 20, 2018
5.0 out of 5 stars
10 badass fights outta 10
Verified purchase
My friend says the fights are too fake, but that is what makes it unique. Academy award winning Crouching Tiger Hidden Dragon was done in the same format, a little fantasy involved. Go with it. Acting good too. I love apocalyptic themes and this fills the bill with LORDS ruling fiefdoms of the post modern world era, and swords/fists are once again the weapon of choice. Try it out.
2 people found this helpful

Movie ScumbagReviewed in the United States on October 12, 2016
5.0 out of 5 stars
when's another episode coming... hurry up
Verified purchase
This show is a lot of fun. Some ideas kind of felt simple like hunger games. But a lot of plots or twists that keep it interesting. Of course ultimately the fighting choreography is what sells this and makes it so lively. How did they make the detail in the scenes so hd? Just really superior visuals in this.

My one gripe. It's been forever since they've released anything and they only put out 6 shows . Maybe they are planning on canceling?

I like the all girl fighting clan. Entertaining. The hero guy is super cool. Hope this show not dead. AMC u still out there?

Cyril J. MartinezReviewed in the United States on January 27, 2018
5.0 out of 5 stars
Like apocalyptic shows ? then this one is for you !
Verified purchase
If you enjoy post apocalyptic shows like I do then you love The Badlands.
Imagine a world with no more governments, just different clans fighting for the earth's resources and imagine not many guns are used for defense because bullets have become scarce so people fight with knives and swords.
This is the world of The Badlands which features a great story line, action and yes, romance.
I highly recommend this show to fans of action and post apocalyptic shows.
One person found this helpful

ClaudiaReviewed in the United States on November 29, 2016
5.0 out of 5 stars
One of the Greatest Series to Air!
Verified purchase
I am blown away and in awe.

This is not your typical AMC show. Into the Badlands has a phenomenal plot. The fighting, the story, the characters and the actors... this series has it all. It does not fall from the plot and sticks to events in order, full of surprises & satisfaction. I love all the characters and can't decide who to root for. I am a huge Game of Thrones fan, a Stranger Things fan, and a Breaking Bad fan. 99% of television series lose my interest and I generally do not watch them. I don't own cable but do not miss out on this title. You will not be disappointed. I hope season two is just as good as the first. We'll see in 2017.
2 people found this helpful

D. WilliamsReviewed in the United States on April 2, 2018
4.0 out of 5 stars
Standard flimsy, thin plastic case with No slipcover like the one shown in product picture.
Verified purchase
First off this series is Amazing. My 4 star rating is because of the packaging. Based on the picture I was expecting to receive a nice box set for season one or at the very least a slipcover that the plastic case slides into. What I got was one of the flimsy, thin, standard plastic cases many blu-rays come in. Seller should at least change picture to one that reflects the actual product you receive.
One person found this helpful
See all reviews
Back to top
Get to Know Us
Make Money with Us
Amazon Payment Products
Let Us Help You
EnglishChoose a language for shopping. United StatesChoose a country/region for shopping.
© 1996-2021, Amazon.com, Inc. or its affiliates