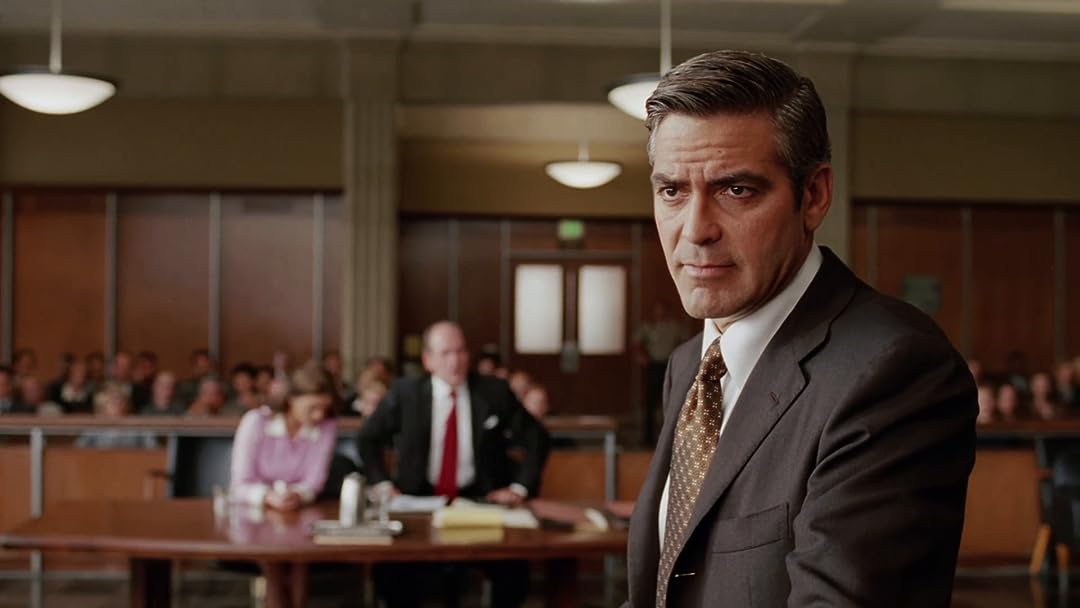 (1,707)
6.21 h 40 min2003X-RayPG-13
Slick divorce lawyer sets up alluring golddigger in court to rescue her cheating husband, only to fall in love with her himself. Directed by Joel and Ethan Coen.

RobbieReviewed in the United States on February 5, 2021
2.0 out of 5 stars
Disappointing... what a bomb ... dreck
Verified purchase
Don't waste your time. This was just bad. In my humble opinion, George Clooney isn't a great actor unless he has really good actors along with him and Jones is just a pretty face. I think she has talent, but she needs good writers desperately. She's type-cast as a Mean Girl all the time (like Vanessa Williams -- always cast as mean or stuck up), but whose acting lacks depth. Yes, Jones won an oscar, but she messed up taking this role.

This was such a "D" rated movie. What were they thinking casting these two in this role??? And Geoffrey Bush??? REALLY? WHAT was HE thinking doing this movie?? Omg.

Were Clooney & Jones (C & J) trying to do a "War of The Roses" (WoTR) spin? He's no Michael Douglas and she's no Kathleen Turner.... maybe the former should have tried to do a remake of WoTR, at least it was way better writing and C & J could try to mimic great performances by great actors.

This was one of those movies where the script and/or writing NEEDS REALLY GREAT ACTORS WITH CHEMISTRY AND SKILL to pull it off, like Goldie Hawn and Kurt Russell. Otherwise, it's just an expensive movie that bombs at the box office. Clooney works better with Julia Roberts, now SHE'S another actor that could have rescued this movie.

Jones needs a more suave leading man with a mischievous romantic side like a Gerard Butler, Ewan McGregor or Benedict Cumberbatch-type.

joel wingReviewed in the United States on June 16, 2020
4.0 out of 5 stars
Can a woman who marries for money and a divorce lawyer fall in love?
Verified purchase
Intolerable Cruelty was a Cohen Brothers production. The movie features George Clooney as divorce lawyer Miles Massey and Catherine Zeta-Jones as Marylin Rexroth who is looking for a rich man she can marry, break up with and take his money. Due to Miles’ line of work he has a very cynical view of relationships. He’s hired by one of Marylin’s ex-husbands to represent him in their divorce and ends up liking her. That raises the question whether they can fall in love given their past.

The repartee between Clooney and Zeta-Jones is perfect. The Cohen’s of course throw in their usual quirky writing. For instance, one of the running jokes they throw in is the Massey prenuptial agreement. Several times a character signs one and then tears it up to which Miles always says, “You’re exposed.” There are some good laughs to be had as well making Intolerable Cruelty one of the Cohen Brothers’ better releases.
C
5 people found this helpful

Thinker3Reviewed in the United States on February 21, 2021
5.0 out of 5 stars
Send-up of the divorce industry
Verified purchase
Can two scum-bags find love and happiness together? Apparently so, the film answers, provided that they each have enough money. This film is a send-up of the divorce industry. George Clooney is a highly successful, though sleazy divorce lawyer who has long since lost any interest in his work. Catherine Zeta-Jones is in the business of marrying for money in the expectation of juicy divorce settlements. When Clooney successfully defends her husband against a divorce settlement, she becomes intent on revenge. A large part of the fun here is that the two main characters have absolutely no illusions about each other. They each know that the other is only out for themselves and, especially, for the money. Ironically, though, they have a powerful attraction to each other—I guess it’s not always true that opposites attract. So, the film turns out to be an ironic love story about two people who are way too jaded to believe in love because they’ve spent their lives profiting from failed and phony marriages. Along the way, there are a lot of funny antics, including an Abbott and Costello type exchange in a courtroom and an hilarious private detective. All in all, the film is very entertaining. It is one of few ultimately upbeat Coen films. It’s also very underrated.
3 people found this helpful

customerReviewed in the United States on January 21, 2020
1.0 out of 5 stars
ugh...the worst!!! Stupid!
Verified purchase
If I could give this movie a zero rating it would be too high. Possibly the stupidest thing I've ever seen, I regret wasting two hours of my life watching it. Don't waste your money on this sophmoric, stereotypical piece of bad acted waste of film.
9 people found this helpful

PattyTReviewed in the United States on February 12, 2021
2.0 out of 5 stars
What a waste of time. Even well know actors couldn't save this movie.
Verified purchase
Can a movie with charming and talented George Clooney and gorgeous Catherine Zita-Jones really be all that bad? Well, for the answer, watch this movie. Ugh. They must have both needed a paycheck to agree to do this movie. Clooney is just not funny when he plays a goofy, shallow character and Zeta-Jones is the same always. She just says her lines and plays the sexy manipulator like she does in many of her movies. The writing is what was bad. The plot. The pacing. The silliness of a hardened divorce lawyer falling in love with a client's smarmy ex wife after seeing her for 10 minutes. Just...no. It may be a light hearted comedy for some but I truly felt I wasted my time watching Intolerable Cruelty. The title almost describes the way I felt sitting through it. Ha!
3 people found this helpful

F.L.C.Reviewed in the United States on November 25, 2019
1.0 out of 5 stars
rotten movie
Verified purchase
Absolutely awful. Don't waste your time with this one. Pure stupid.
7 people found this helpful

FrankReviewed in the United States on May 8, 2018
4.0 out of 5 stars
One of my favorite comedies
Verified purchase
A very enjoyable movie that I've loved for years, it was time to buy it.

One of the most humorous things I've enjoyed I discovered by mistake: I played the first scene (with Ed Hermann) using Spanish audio inadvertently.

Since I have not watched this movie in several years, I could not remember if it was supposed to be like this, but I found it extremely hilarious, specially since the lips did not match the audio (akin to an old Godzilla movie). I will play it like this for a long time to come.

Note: If you want to skip the previews without seeing or hearing them and your system won't let you, connect your DVD player using only analog channels and simply let them play with the sound and TV off until it gets to 'root.'

Alternatively, while the first preview is playing, press STOP, then STOP (again) and PLAY or MENU on your remote.
3 people found this helpful

Yeah RightReviewed in the United States on July 26, 2017
4.0 out of 5 stars
Great Comedy
Verified purchase
The Coen Brothers named O Brother Where Art Thou after a film title in Sullivan's Travels, but Intolerable Cruelty plays more like a Preston Sturges romantic film with quick pacing, plot twists and dialogue filled with double entendres (The Massey pre-nup cannot be penetrated). This movie escaped me upon it's 2003 release, but I bought the Dvd when I was catching up on Coen Brothers films that I had not seen. This is not the Coens' best comedy (Raising Arizona, Fargo, Big Lebowski), but after watching it several times in the past few years, it provides many laughs. Billy Bob Thorton has a small but funny role, especially the scene in the lawyer's office. Catherine Zeta-Jones turns in a great performance and she looks absolutely stunning.
5 people found this helpful
See all reviews
Back to top
Get to Know Us
Make Money with Us
Amazon Payment Products
Let Us Help You
EnglishChoose a language for shopping. United StatesChoose a country/region for shopping.
© 1996-2021, Amazon.com, Inc. or its affiliates