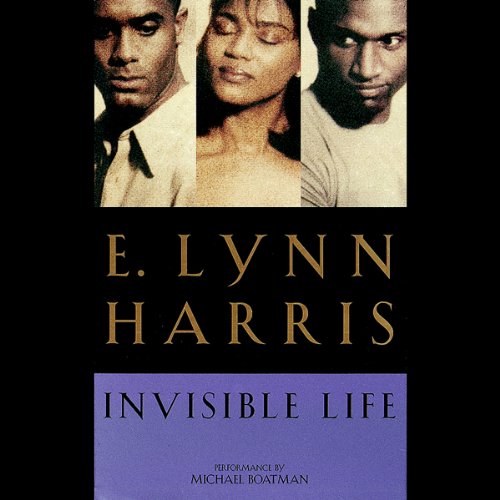 The remarkable first novel by a young, gay, Black author who fashioned a deeply moving and compelling coming-of-age story out of the controversial issues of bisexuality and AIDS. Law school, girlfriends, and career choices were all part of Raymond Tyler's life, but there were other, more terrifying issues for him to confront.

Being Black was tough enough, but Raymond was becoming more and more conscious of sexual feelings that he knew weren't "right." He was completely committed to Sela, his longtime girlfriend, but his attraction to Kelvin, whom he had met during his last year in law school, had become more than just a friendship.

Fleeing to New York to escape both Sela and Kelvin, Raymond finds himself more confused than ever before. New relationships - both male and female - give him enormous pleasure but keep him from finding the inner peace and lasting love he so desperately desires. The horrible illness and death of a friend force Raymond, at last, to face the truth.

Invisible Life has been hailed as "one of the most thought-provoking books - since James Baldwin's Another Country" (Richmond Voice), and Harris's "stories have become the toast of bookstores, reading groups, men, women, and gay and straight people" (Atlanta Journal-Constitution).

Enjoy a free audiobook + more
Learn more about Membership
List Price: $31.93
You Save: $3.99 (12%)
By completing your purchase, you agree to Audible’s Conditions Of Use
Sold and delivered by Audible, an Amazon company
Share

4.7 out of 5 stars
4.7 out of 5
326 global ratings
How are ratings calculated?
To calculate the overall star rating and percentage breakdown by star, we don’t use a simple average. Instead, our system considers things like how recent a review is and if the reviewer bought the item on Amazon. It also analyzes reviews to verify trustworthiness.
Top reviews

I am grateful to whatever gods may be I found my aunt’s collection of his novels on the bookshelf, when I was a youth. The Invisible Life series gave me a look into a life I had only imagined, and made me realize it was possible to love another man - in romantic partnership.

While this book explores DL culture in depth, the stories of heartache and secrecy, led me to know the type of partnership I did not desire.

As a freshman in college in 2007, I had the pleasure to meet E. Lynn in person when he visited Morehouse during our Tiger Talks Series - moderated by our then Editor in Chief, Travers Johnson. Their dialog took place at Sale Hall, which is one of our campuses most storied buildings. Sale Hall is known to have held sermons preached by epic alumni Pastors, such as Howard Thurman and Martin Luther King, Jr.

The next year, E. Lynn tragically passed away from unknown health complications. Because of his literary contributions his life and his stories live on.

The beauty of the written word is the article I wrote in The Maroon Tiger, chronicling his visit to Morehouse and celebrating his life, while he was living, will live on forever.

Erika
4.0 out of 5 stars Nostalgic
Reviewed in the United States on January 7, 2022
Verified Purchase
I decided to buddy read this with a group of fellow book lovers. What a pleasure it was to revisit this iconic book after so many years. I was reminded of how special Mr. E Lynn Harris was. He was brave. He was creative. He was the voice for so many beautiful, Black men. Harris and his talents are sorely missed. Thankfully, he left us this book and so many others. I’m so glad that I took the time to be reintroduced to Raymond and his supporting characters.
Read more
Helpful
Report abuse

amygobucks
1.0 out of 5 stars Ugh.
Reviewed in the United States on May 26, 2018
Verified Purchase
Ugh. This was like a bad harlequin romance. These characters were shallow. I was mad at Ray for being so selfish most of the book, and as a result I didn't care by the end, an end which by the way, doesn't end. I hate it when authors don't have the decency to finish their books. Overall, I should have put it down and not bothered to finish.
Read more
4 people found this helpful
Helpful
Report abuse

D. Williams
4.0 out of 5 stars Very entertaining book.
Reviewed in the United States on June 8, 2015
Verified Purchase
I would recommend this book to anyone who is interested in a story of depth and searching--one trying to find one's way in his/her life. Life does not always unfold as we would like it to unfold, and we not uncommonly find ourselves with new events, experiences and feelings that we may not be able to, at least in the beginning, know how to reconcile with our upbringing. This book handles these kind of life experiences very well. The writing flows easily and there are no problems trying to follow the storyline development or characters. I'm looking forward to reading the next book that was written to follow this one.
Read more
5 people found this helpful
Helpful
Report abuse

Terell D. Andrews
5.0 out of 5 stars Loved it!!!
Reviewed in the United States on October 15, 2017
Verified Purchase
This was a great first novel from one the world's greatest storytellers. I must admit the characters were well developed and the storyline grabbed my interest quickly. I enjoyed the entire story, currently reading the second book of the series.
Read more
2 people found this helpful
Helpful
Report abuse

Angel
5.0 out of 5 stars E Lynn Harris is extraordinary with his story telling!
Reviewed in the United States on July 15, 2020
Verified Purchase
This book was recommended to me in the late 90s it changed my life ! Thank you E Lynn Harris for being that voice for us when it was too taboo sleep in peace.
Read more
Helpful
Report abuse

Russell Hooker
5.0 out of 5 stars An Amazing read!
Reviewed in the United States on November 9, 2021
Verified Purchase
This book was very interesting and opened my eyes as a seventeen year old gay black young man. I appreciate books like this told by authors that look like me. Having a book like this being written by a gay black man is amazing and makes you feel heard. All of these characters are interesting in their own way and the storytelling really puts you there. I can’t wait to buy the second and third book! Rest In Peace E. Lynn Harris. I appreciate you! My brother..
Read more
Helpful
Report abuse
See all reviews

Staircase2
5.0 out of 5 stars Amazing
Reviewed in the United Kingdom on January 10, 2010
Verified Purchase
I've been a fan of E Lynn Harris for a very long time now (my ex boyfriend bought me a copy of this book shortly after it first came out back in the early to mid 90s). I bought a copy of this for my current boyfriend because I thought he would like it (he did and he's now hooked and busy off buying all the next books! lol)

I rememeber the mainstream gay press in the UK giving this book a rough time when it was reviewed calling it schamltzy but I think they missed how well this book sums up life from an African-American perspective. Its been a long time since I read it but it was a formative read for me and I rememeber being enthralled by the warmth of the characters.

Its an easy going read but E Lynn Harris is a master of story telling. Its the story of the struggle to come to terms with one's sexual indentity. And while it comes from the perspective of the African-American community its a struggle that all gay men and women have to make regardless of their background. Some of the details may change but the journey is always the same.

Im surprised that noone has taken his work and turned it into a movie yet - the first 3-4 books would make a great black, gay 'waiting to exhale' type movie. To some extent Noah's Arc tried to take his formula and expand it onto the small screen.

Sadly E Lynn Harris died in July 2009 from Heart Disease which was so upsetting as I was looking froward to far more work from him. As it stands (according to Wikipedia) he published 15 books including his new book, "Mama Dearest" which was completed shortly before his death and is yet to be available.

As for "Invisible Life" its a "reet riveting read!" Thoroughly recommend it.
Read more
Report abuse

sandra brown
5.0 out of 5 stars Fab
Reviewed in the United Kingdom on December 17, 2017
Verified Purchase
Fab book by a fab author ..he takes you on a journey of truth,honesty and guts!
Must read.
Read more
Report abuse

P. Evans
5.0 out of 5 stars Five Stars
Reviewed in the United Kingdom on August 26, 2017
Verified Purchase
Great read thanks!
Read more
Report abuse
See all reviews
Back to top
Get to Know Us
Make Money with Us
Amazon Payment Products
Let Us Help You
EnglishChoose a language for shopping. United StatesChoose a country/region for shopping.
© 1996-2022, Amazon.com, Inc. or its affiliates