The Invisibles: Book One - Deluxe Edition and millions of other books are available for Amazon Kindle. Learn more 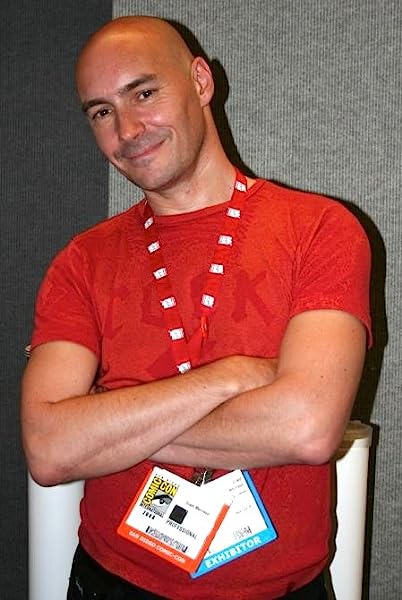 "I suddenly realized that everything that I'm trying to say in my nonfiction work, and in some of my fiction work, had been so beautifully and so imaginatively expressed in the work of Grant Morrison."--Deepak Chopra

Writer Grant Morrison is known for his innovative work on comics from the graphic novel Arkham Asylum to acclaimed runs on Animal Man and Doom Patrol, as well as his subversive creator owned titles such as The Invisibles, Seaguy and WE3. He has also written best-selling runs on JLA, Seven Soldiers of Victory and New X-Men and recently helped to reinvent the DC Universe in The Multiversity, All-Star Superman, 52, Batman, Batman & Robin and Batman, Inc.
Start reading The Invisibles: Book One - Deluxe Edition on your Kindle in under a minute.

4.7 out of 5 stars
4.7 out of 5
252 global ratings
How are ratings calculated?
To calculate the overall star rating and percentage breakdown by star, we don’t use a simple average. Instead, our system considers things like how recent a review is and if the reviewer bought the item on Amazon. It also analyzes reviews to verify trustworthiness.

James B.Top Contributor: Batman
4.0 out of 5 stars Vintage Grant Morrison
Reviewed in the United States on September 9, 2018
Verified Purchase
The Invisibles is one of the top rated comics from Vertigo, and it's written by Grant Morrison, so I had to check it out. This series combines all of Morrison's favorite tropes: magic, psychadelic drugs, age old conspiracies, and his signature weirdness.

The story begins with Dane McGowan, a hoodlum living in Liverpool England. Dane's contempt for authority attracts the attention of two sides of a magical conflict. First, a group of government officials throw him in jail and plan to drain him of his free will. This is until he is rescued by the Invisibles, a group of magic anarchists fighting for unlimited freedom. The first volume of the series has Dane slowly becoming more involved with his saviors.

While the series does a good job of action and dialogue, the plot is extremely disjointed, even by Morrison standards. Combined with the dull artwork, I admit I couldn't fully get into this series. People who are looking for an introduction to Morrison would do better to read Animal man of Arkham Asylum.

Chris m.
2.0 out of 5 stars Damaged on Arrival
Reviewed in the United States on January 13, 2020
Verified Purchase
Outer cover ripped upon arrival. Not a huge deal, but kinda disappointing. I would think about returning, but don’t have time as it’s meant to be a gift.
Read more

2.0 out of 5 stars Damaged on Arrival
By Chris m. on January 13, 2020
Outer cover ripped upon arrival. Not a huge deal, but kinda disappointing. I would think about returning, but don’t have time as it’s meant to be a gift.
Images in this review

Cara
5.0 out of 5 stars Mindbendingly epic!
Reviewed in the United States on January 13, 2019
Verified Purchase
The Invisibles series is truly unique,bizarre and just a plain wild ride. Worth reading a thousand times and who knows you just may free your mind.
Read more
One person found this helpful
Helpful
Report abuse

james brown
5.0 out of 5 stars The invisibles book one
Reviewed in the United States on February 9, 2021
Verified Purchase
I,liked this item.
Read more
Helpful
Report abuse

Natalia L. Forty Nieves
5.0 out of 5 stars Great
Reviewed in the United States on April 10, 2016
Verified Purchase
This was a great read, the pace, content and depth was very good and I would definitely recommend this to anyone who enjoys good solid stories in comic book format that wants an exhilarating read that breaks down structures and stereotypes.
Read more
7 people found this helpful
Helpful
Report abuse

Adam san
5.0 out of 5 stars Must read
Reviewed in the United States on June 27, 2019
Verified Purchase
Badass book . Went into it blind , went out loving it.
Read more
2 people found this helpful
Helpful
Report abuse

E. Jackman
4.0 out of 5 stars Buy this now!
Reviewed in the United States on January 24, 2015
Verified Purchase
This is not a review for the story itself, but rather on the collection. The Invisibles is a fantastic comic and one of Grant Morrison's most insane works.

However, like other hardcover collections that DC has been putting out, this hardcover has a glued binding. With any glued binding, problems like not being able to comfortably lay the book flat and having the insides of pages being eaten up by the binding will occur. After many repeated readings (unless you take super-care of your books) pages will start to fall out. This is to be expected with any book that has glued binding. Is it still worth purchasing this volume? Yes. The price is right, the page quality is very good, and I like the texture they used on the dustcover. Go read this amazing story, and as long as you take care of the book it will last a very long time.

joao guedes
5.0 out of 5 stars Invisibles TP Book One
Reviewed in the United Kingdom on May 9, 2017
Verified Purchase
great book. Its huge and the pages are realy made from a high quality paper. The book looks awesome. Must buy
Read more
3 people found this helpful
Report abuse

VP
5.0 out of 5 stars Simply Amazing
Reviewed in the United Kingdom on June 21, 2020
Verified Purchase
Surely influenced The Matrix; in turn, probably influenced by Jorge Castaneda’s Don Juan and other older philosophies. Enjoyed the content, the illustrations and the format. Highly recommended.
I
Read more
Report abuse

Scott
5.0 out of 5 stars Excellent
Reviewed in the United Kingdom on January 23, 2019
Verified Purchase
Pulls you right in, quality read that’s hard to put down
Read more
One person found this helpful
Report abuse
See all reviews

Page 1 of 1 Start overPage 1 of 1
Previous page
Next page
Pages with related products. See and discover other items: america comic, funny history books
Back to top
Get to Know Us
Make Money with Us
Amazon Payment Products
Let Us Help You
EnglishChoose a language for shopping. United StatesChoose a country/region for shopping.
© 1996-2021, Amazon.com, Inc. or its affiliates