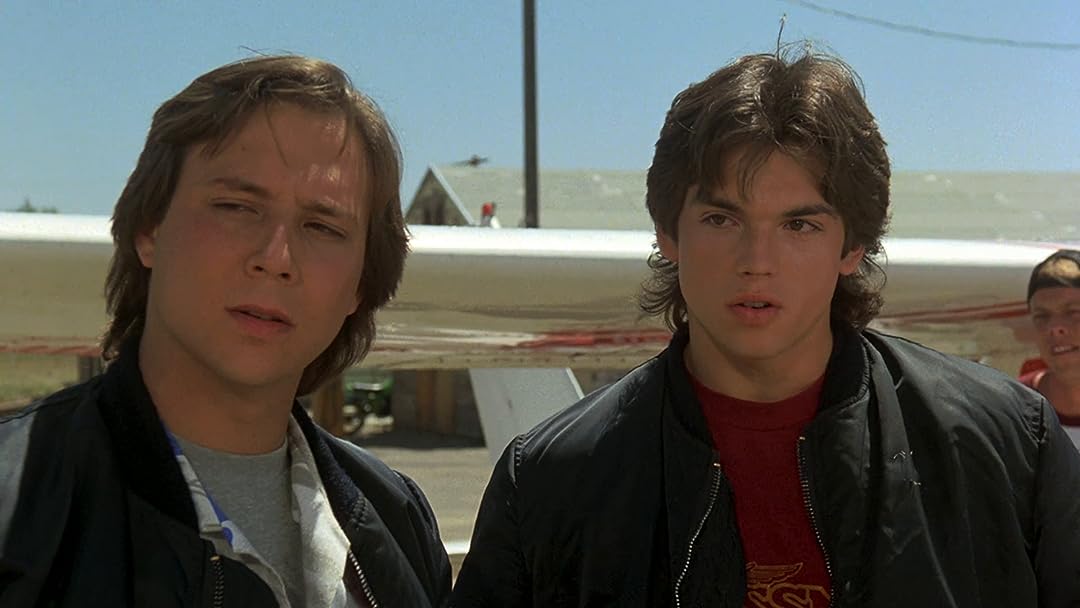 OrumusReviewed in the United States on April 11, 2021
5.0 out of 5 stars
After all this time it's still a fun watch!
Verified purchase
Most movies I loved as a kid are almost painful for me to watch as an adult. This movie however is still enjoyable. I can even remember the scenes I loved the most as a kid watching this and I still like those scenes.
Great fun flick to watch with your kids or just for fun!

Side note. With todays racial charged climate I watch films like this and think back to the days when we gave no thought to someone's skin color. When I was 8 it didn't matter that Doug's mentor was black. Heck when I think back on it, I don't even think I noticed. Sure there where racists then and some now but we as a society where moving past that. It was a hopeful time when we could believe that anything was possible. That if we came together we could accomplish anything. Now it seems like we have taken so many steps backwards in our societal development. Back to massive racial hatred and distrust. I watch movies like this and remember what it used to be like and it makes me sad for the future of the USA.

Michael A.Reviewed in the United States on November 7, 2017
5.0 out of 5 stars
Still a fun watch after all these years
Verified purchase
It's still a fun watch after all these years and what a trip back in time! Who doesn't like watching F-16s blow stuff up?! The aerial scenes and effects are pre-CGI and not as well done as in Top Gun. The low budget effects don't detract from the story and has that fun 1980s cheesy feeling that you get after being spoiled by 20+ years of improved special effects. Louis Gossett Jr is great, the guy who plays protagonist "Doug" isn't toooo bad and who knew that "Katie" (Doug's girlfriend) would make such a great career for herself after such a tiny part in this movie. It stinks that it's not "for rent" as I've watched it exactly 3 times since it first hit video, but the "buy" price is pretty cheap.
13 people found this helpful

SonomaGuyReviewed in the United States on December 29, 2018
3.0 out of 5 stars
Probably deserves just one star, but it's so bad it's good!
Verified purchase
Grab some beers, camp around the TV set with your bros and get ready for some super 80s cheese ball plot with a super silly scrip. Good guys vs. "the bad middle eastern" country, F-16s that seem to be able to loiter over an enemy base for nearly an hour while constantly using the afterburner, Rambo-like accuracy from the good guys... IDK, it's terrible but also great for a laugh. Rating it against similarly terrible classics, like Red Dawn (which I love for the same reasons) makes more sense than comparing it to Top Gun that had better actors and a better budget. Top Gun also wasn't written for pubescent teenage boys exclusively, for which I'm 100% certain this movie appealed to more than any other demographic when this came out.

Some of the flying scenes with the general aviation aircraft were actually kinda impressive.

allen kramerReviewed in the United States on April 4, 2021
5.0 out of 5 stars
great 1986 movie
Verified purchase
i enjoyed watching this movie today as much as i did in 1986 when it was released shortly after top gun. even though the special effects were not on par with top gun they are still very good. i also think emilio estevez who auditioned for doug would have been better for the role. even though morgan freeman is a top notch actor they made the right choice with gossett potraying the the role of chappie who was inspired by a real life general from the tuskegee airman. a must watch.
One person found this helpful

M. ClipperReviewed in the United States on August 10, 2015
5.0 out of 5 stars
Cheesily Great 80's Movie
Verified purchase
Sure, it's cheesy by today's standards, but Iron Eagle was one of my favorite movies as a kid when it first came out. While reading Ernest Cline's latest book, Armada, I was reminded of how much I enjoyed it, and I thought I would share it with my kids, who are now about the same age as I was when I first saw the movie.

Unfortunately, the version of the movie that Amazon streams has a flaw with the audio encoding (thus the reason for only 3 stars). I purchased the HD version and watched it streamed via the Roku app on a 1080p / 5.1 home theater system. The picture quality was great, but the sound quality was terrible. It sounded as if some of the audio channels were out of phase with the others, as you could hear the dialog coming from separate speakers at a slightly different time (within milliseconds), but it was just enough to make the dialog very difficult to understand. In addition, the dialog seemed muffled compared to the rest of the audio. I've never had this problem before on any other 5.1 movie that I've streamed to the same home theater system, and I even tried cycling the power to everything and rebooting the Roku, with no success, so I'm convinced the flaw is in the encoding of the movie itself. (I have not yet tried watching the movie using the 2-channel audio stream, so I cannot confirm if it has a similar problem.)

Update 8/19/2015 - So I have to retract what I said before about the poor 5.1 audio encoding of this movie and update my overall rating. After posting my original review, I watched another movie streamed by Amazon and noticed the same exact problem. After doing some investigation, I discovered that my kids inadvertently changed some settings on my home theater system, which was causing the audio problem I was having. I've since corrected the settings, and the movie plays back just fine now.
8 people found this helpful

tinkmommyReviewed in the United States on June 27, 2020
3.0 out of 5 stars
Great movie for a throw back movie night
Verified purchase
We had a throw back movie night with our kiddos and this was the perfect movie to watch. We made it until the last 2 minutes of the movie and then the DVD froze. We were sad about that there is an obvious flaw on the disc. But we figured since we wont be watching it all the time it was ok. Just beware because our movie was secure in the case so we don't know how the flaw happened.
One person found this helpful

GODFATHERReviewed in the United States on April 6, 2022
5.0 out of 5 stars
Memorable classic
Verified purchase
This is a movie that is as good now as it was then. I DON'T like the way some compare this to "Top Gun" since the story lines are COMPLETELY different! This is a tough one to explain without giving away the story plot or ending. There is a seriousness to it along with some comedy slipped in.

knitemanReviewed in the United States on February 3, 2018
5.0 out of 5 stars
An amazing adventure comedy that will have you laughing and cheering
Verified purchase
What can I say, Louis Gusset is always great. This movie is basically about a semi-typical military brat that has minor friction with regular high school bully. Then life interrupts his graduation. His father is a well respected colonel in the Air Force. And the other friends of his all have high ranking fathers in different areas around the base. Won't give away the plot but this is a great deal good adventure comedy that is perfect for all ages. you'll be cheering laughing and having a great and enjoyable evening .
2 people found this helpful
See all reviews
Back to top
Get to Know Us
Make Money with Us
Amazon Payment Products
Let Us Help You
EnglishChoose a language for shopping. United StatesChoose a country/region for shopping.
© 1996-2022, Amazon.com, Inc. or its affiliates