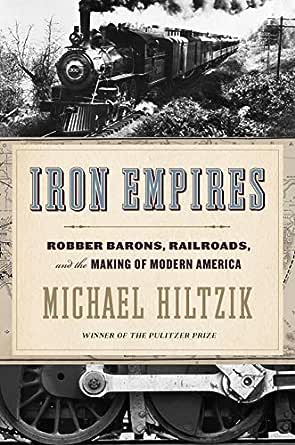 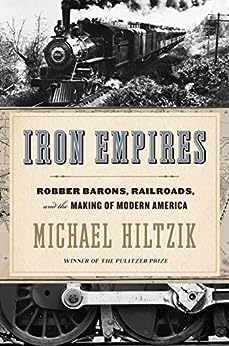 Unbridled ambition, greed, corruption, 'creative destruction, ' and a bit of conscience - Michael Hiltzik's vivid account of the railroad barons in the Gilded Age shows us the workings of unbridled capitalism at its zenith (or nadir, as the case may be). The names Morgan, Harriman, Pullman, Hill, Villard, Rockefeller will forever be associated with creating America's first great infrastructure and making America 'modern.'-- "Gordon H. Chang, author of Ghosts of Gold Mountain: The Epic Story of the Chinese Who Built the Transcontinental Railroad Were the railroad barons of the 19th century great entrepreneurs in the American spirit who built a remarkable network of railroads? Or were they robbers who fleeced local people and passengers alike? In this superb and comprehensive book, Hiltzik lets you decide, with the help of a few hints." --This text refers to the audioCD edition.

Michael Hiltzik is a Pulitzer Prize-winning journalist and author who has covered business, technology, and public policy for the Los Angeles Times for twenty years. In that time he has served as a financial and political writer, an investigative reporter, and a foreign correspondent in Africa and Russia. He currently serves as the Times’ business columnist. His other books include Colossus, The Plot Against Social Security, Dealers of Lightning, and A Death in Kenya. He received the 1999 Pulitzer Prize for articles exposing corruption in the entertainment industry. Among his other awards for excellence in reporting are the 2004 Gerald Loeb Award for outstanding business commentary and the Silver Gavel from the American Bar Association for outstanding legal reporting. A graduate of Colgate University, he received a master of science degree in journalism from the Graduate School of Journalism at Columbia University in 1974. He lives in Southern California with his wife and two children.

4.4 out of 5 stars
4.4 out of 5
17 customer ratings
How does Amazon calculate star ratings?
Amazon calculates a product’s star ratings based on a machine learned model instead of a raw data average. The model takes into account factors including the age of a rating, whether the ratings are from verified purchasers, and factors that establish reviewer trustworthiness.
Top Reviews

Suzanne Amara
TOP 500 REVIEWERVINE VOICE
4.0 out of 5 stars A "Great Man" approach to railroad history, narrative-driven and personable
Reviewed in the United States on May 6, 2020
Vine Customer Review of Free Product( What's this? )
Michael Hiltzik creates a rich, narrative-driven account of the consolidation of America’s railroads into the archetypal mega-corporations that have defined the 20th and 21st centuries. Taking the “Great Man” approach to history to an enticing level of personal detail, Iron Empires follows the stories of influential men (and a few women) such as Jay Gould, Ed Harriman, Cornelius Vanderbilt, J.P. Morgan, and Theodore Roosevelt who financed, maintained, consolidated, and ultimately regulated America’s railroad conglomerates of the late 19th century. Hiltzik transforms the often structural analysis of American railroads into a personal one based on the actions, whims, and temperament of a few powerful people, thus charting new historiographical ground in a well-studied subject. Furthermore, he treats his subjects without explicit lionization or demonization, instead portraying them as the flawed, eccentric, and sometimes compassionate and admirable people they were. Readers not explicitly interested in railroad history or the history of capitalism will find much to enjoy in Hiltzik’s personable, almost-biographical account of America’s 19th century railroad financiers, magnates, and regulators.

Hiltzik certainly could improve Iron Empires in some respects. While the personal narrative structure of the book make it popular and enticing to read, he foregoes the more analytical points that the narrative demonstrates. Hiltzik hints at critical historical processes such as the gravitas of railroad consolidation in transforming the movement of goods and people throughout the country and the effects that this wealth consolidation had on American labor movements, but he never explicitly states these points. Perhaps he understands that seasoned history readers know these points have been made elsewhere copiously, but it would balance his work to include them in Iron Empires. While Hiltzik intentionally frames his book as a counter to heavily analytical and structure-based works such as William Cronon’s Nature’s Metropolis, adding more analysis to his narrative would make his work more complete.

Author, Michael Hiltzik, has written a detailed accounting of the who, how, where, and what of all things related to the railroad business from directly after the Civil War thru the late 20th century. It’s well written and easy to read broken down into 3 sections:

PART 1 - The Age of Scoundrels - mini bios on the key railroad industrialists, building the base for the wheeling,
dealing and impact on the country for the future

PART 2 - Morgan & Harriman - a deep dive into these two key men and the expansion of both the railroad and the
industry. This is where the title comes in - “Iron Empires” are built and developed, showing the start of
and extent to the insidious business practices

PART 3 - The Ghost Dance - the ultimate reveal of monopoly & mayhem that permeated this industry. What is that
expression about learning from history? Not repeating or something?!?!? 🙄❓

Hultzik has included a wonderful array of photos, maps and newspaper clippings/art. His references are varied and numerous and organized by chapter at the end of the book. This is a big volume of just over 400 pages in the pre-pub copy I received for review.

All things considered, an interesting read from both an historical and business perspective 📚

Found Highways
4.0 out of 5 stars Scoundrels, Every One
Reviewed in the United States on March 31, 2020
Vine Customer Review of Free Product( What's this? )
Iron Empires starts out as a business history, detailing the deal making and financial shenanigans that surrounded the building of the railroads. These men were not heroes, they were simply capitalists who were taking advantage of the money making opportunities that existed. Whether the railroads were successful or not was immaterial to them, as long as they made money. They flipped railroads like investors flipped houses a few years ago.

About half way into the book, it becomes a labor history as well, since a lot of people were responsible for building those railroads and keeping them running. In order for the robber barons to make the most money, they had to keep wages low and not spend money on safe working environments. Eventually, the workers got fed up and started to demand better wages and conditions.

This is a factual account that doesn't take sides or include editorial comments. The notes are copious and the bibliography is comprehensive. This is an excellent reference, and some might enjoy it as a popular history if you are very interested in the ins and outs of business deals and business law of the late 19th century.
Read more
One person found this helpful
Helpful
Comment Report abuse
See all reviews from the United States