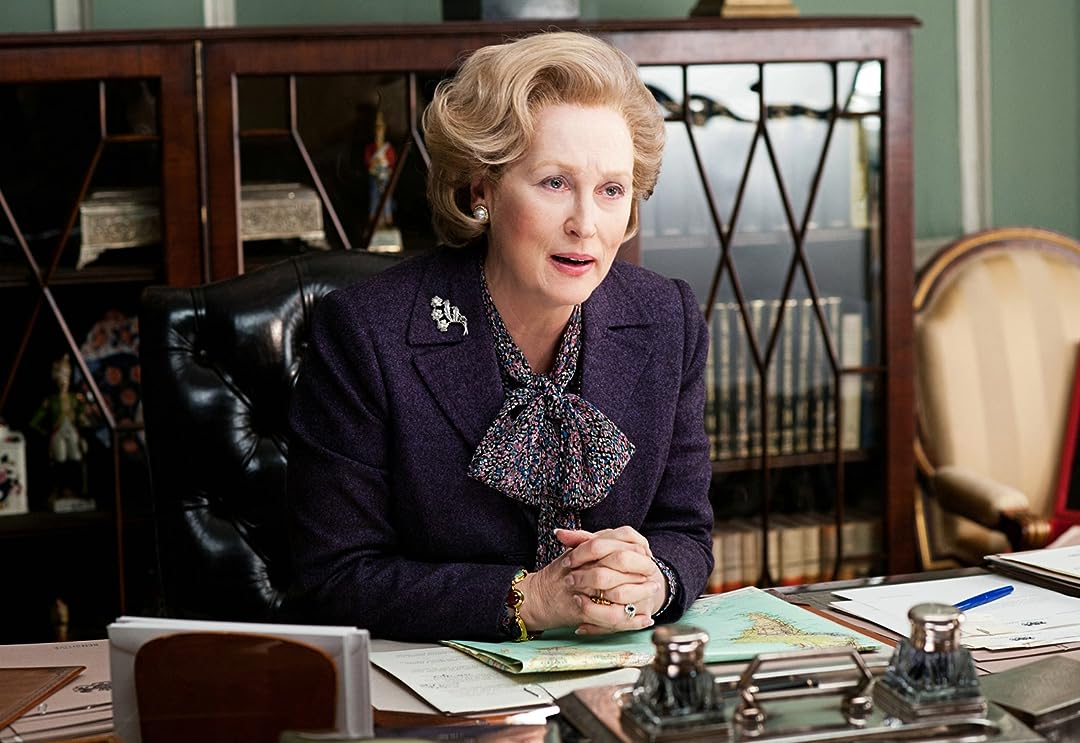 (2,045)
6.41 h 44 min2011X-RayPG-13
OSCAR®-winning Meryl Streep is Margaret Thatcher in this insightful and intimate portrait of the first and only female Prime Minster of the United Kingdom.

AnneReviewed in the United States on February 19, 2017
1.0 out of 5 stars
Terrible storytelling
Verified purchase
I was so disappointed by this movie, as it was a lost opportunity to tell a great story. Most of the time is wasted on showing a senile old Margaret Thatcher bumbling around her apartment with hallucinations of her late husband and flashbacks of her life. There is very little context given around the events she dealt with, why they happened, and how the outcome did or did not improve things. Most viewers under 45 years of age won't be old enough to remember these events to have any of that context. It is disgraceful that the portrayal of a strong woman has to focus on her senile old years at the cost of the impactful ones. Meryl Streep did a wonderful job as usual and her performance gets 5 stars. I hope that someday someone will actually tell this story properly.
56 people found this helpful

Kris BoucherReviewed in the United States on July 27, 2019
1.0 out of 5 stars
Disappointing movie
Verified purchase
This movie was such a disappointment. I’d heard so much, when it was out in theaters, about how great it was and it was on my bucket list for a long time. Finally get around to watching it and was just not clear on what all the hype was about. First of all, it was very slow paced. It jumps around in time, from showing Mrs Thatcher as a doddering old woman hallucinating conversations with her long dead husband to showing a few scenes from her younger days that really didn’t lend much to the story to finally, about 2/3 of the way through, there is about 10 minutes of good drama depicting the Falklands war. The whole thing is done in such a tedious, disjointed fashion that the viewer is unable to develop any kind of emotional connection to what’s going on. Even when they show the event of her hotel being bombed by the IRA and she fears her husband has been killed by the blast, the viewer isn’t able to share her anguish because the relationship hasn’t been sufficiently developed through out the movie. When it ended, it was just a relief.
20 people found this helpful

EthericOneReviewed in the United States on June 5, 2018
1.0 out of 5 stars
Terrible script and film direction
Verified purchase
I love Meryl Streep and was very interested in a bio-movie about Margaret Thatcher. However, this film has a truly horrible script. I am amazed that someone actually got a ton of money to create a Hollywood movie with such a poor script (hey there, movie producers, if you have money to invest/waste in such bad scripts, I can guarantee that I can provide a movie script for you for half of what you spent on this one)and/or poor directing! As other reviewers have noted, it focuses mainly on portraying a doddering elderly woman suffering from dementia and nostalgia. Margaret Thatcher was one of the most powerful leaders of her time - how about focusing mainly on her accomplishments and challenges throughout her life?? The film then overuses flashbacks to try to show Ms. Thatcher's earlier life, but without providing any time, location and other important identifiers for viewers to be able to understand what the flashback is showing. It's like a really poorly-stitched together patchwork quilt - it looks crappy and falls apart at the seams. We watched 15 minutes, skimmed ahead to see if it would get any better, realized it would not, then quit and went on to watch something else. Meryl Streep's immense talent is wasted on this poorly-executed attempt at a film.
22 people found this helpful

spookarooReviewed in the United States on November 21, 2020
2.0 out of 5 stars
What other's said-and more
Verified purchase
Many well-written reviews that address the issues with the film so I won't delve into all that. Interestingly, to me it seems as if someone (the screenwriter and/or director) had it in for Thatcher and did their best to portray her as someone who loathed hollow, self-serving ambition yet was consumed by such. The snake swallowing itself. I'm not someone who follows politics so I can't say if history is treating her fairly or not. Remember her words in the beginning when she meets her husband-to-be and is certain she would never become one of "them". The film shows her success as her greatest failure. There was little focus on other important characters, her husband, children, because it's showing that's how she must have treated them throughout her career. She made good her words to Dennis the day he asked her to marry him. She would not be a stay at home mom or good little wife who doted on her family. This film wasn't about her political career but about her failure in the most intimate moments of her life, to her own family.
3 people found this helpful

Greg ShakespeareReviewed in the United States on December 2, 2020
5.0 out of 5 stars
I was a Yank in uniform stationed in England during the PM's first years
Verified purchase
Streep was extraordinary. Her dramatic opening, an elderly Thatcher, solo, walking briskly down the street to fetch a carton of milk. You felt an immediate urge to escort her!

As a GI I witnessed some remarkable changes happen at the start of "Maggie's" decade... A short section of A12 road to London perpetually under construction, workers pathetically slow at a unionized rate. British Telecom taking the better part of a year before finally installing a phone line to my flat.

When Thatcher announced privatizing government owned telecommunications in '82 which was called British Telecom. It instantly attracted investors and supplied a great mountain of growth for Great Britain. I lived far up north away from London in a Gainsborough landscape where I served twin RAF airfields. At the end of '82, I remember the exotic sight of young women at bus queues already shouting near-Scottish brogues into "cellphones" - the lucky Brits got cellphones before Americans did.

Andrea ChristensenReviewed in the United States on June 23, 2016
3.0 out of 5 stars
5 Stars for Meryll, 1 Star for The Script
Verified purchase
Meryll, thank you for agreeing to take on this role. While I know your views differ wildly from Mrs. Thatcher, you magnificently re-created who she was down to the tiniest voice inflection. As someone who has closely studied and admired MT, it was truly a joy to watch her visage so powerfully portrayed within you.

To whoever wrote this script, you EPICALLY and TRAGICALLY failed. You had a fantastic subject matter (Margaret Thatcher) and subject (Meryl Streep) and yet you couldn't craft anything to do them justice. It wasn't just the fixation on her alleged dimentia-riden later years (We get it- getting older is harder for EVERYONE) it was the complete repudiation of what made Margaret Thatcher so exceptional for her era. Yes, she had her moments of intransigence, but MT was also an unparalleled dynamo of principle and vision. You didn't even try to touch on this magnitude, and it makes me sad. I finished this film feeling disappointed that such a perfect opportunity had been wasted.

It's unlikely, but I hope someone else tries to breach this subject matter. Margaret Thatcher deserves better.

G. GladfelterReviewed in the United States on June 28, 2021
1.0 out of 5 stars
Flashbacks for the sake of insanity?
Verified purchase
Physically the disk is fine. But, using flash back, flash forward - every few seconds - makes the story incoherent. Really? A time shift every few seconds. It seems that the real message in this "film" is that Thatcher was a demented, decrepit has-been. Every point made is presented as a snapshot without real development or explanation. Was this done on the assumption that the audience's attention span was extremely limited, or what? It came across to me as a hatchet job on Maggie. In any case: this thing is unwatchable. Buy it if you have an urge to fill your trash can.
2 people found this helpful

joel wingReviewed in the United States on April 21, 2021
2.0 out of 5 stars
Premise of movie doesn't work
Verified purchase
Iron Lady has a very interesting start. Margaret Thatcher is long been out of office and she’s suffering from dementia. They use her visions to tell her story through a series of flashbacks. It’s very odd because it just show little glimpses into her life but rarely goes into any depth about anything. You do get a gist of things like Thatcher grew up middle class, the daughter of a shop keeper which shaped her political views and she struggled at first. The best part might be the Falklands War. I don’t think showing her in her old age was meant to demean her but rather humanize her since she had such a hard image, hence “The Iron Lady.” I just don’t think that angle worked.

Meryl Street plays the older Thatcher and she has a great transformation with the make-up. I just wish she had more to work with in this film.
One person found this helpful
See all reviews
Back to top
Get to Know Us
Make Money with Us
Amazon Payment Products
Let Us Help You
EnglishChoose a language for shopping. United StatesChoose a country/region for shopping.
© 1996-2021, Amazon.com, Inc. or its affiliates