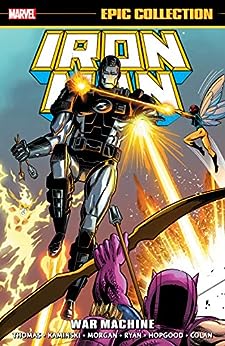 The gunmetal-gray Avenger! Tony Stark’s health takes a turn for the worse thanks to the intergalactic Operation: Galactic Storm! Back home, the Masters of Silence are waiting - and to defeat them, Tony needs to build a new armor unlike any other! But with Justin Hammer gunning for him, will he live long enough to get used to it? Or will the suit be a better fit for James Rhodes? When Tony’s health finally gives out for good, Rhodey must face his destiny - as a War Machine! But which is worse: filling Iron Man’s boots or running Stark Enterprises? Guest-starring Darkhawk, the West Coast Avengers and a lineup of classic villains from Blizzard to Blacklash!
Read more
Previous page
Next page
Read this book on comiXology. Learn more
Kindle e-Readers
Fire Tablets
Free Kindle Reading Apps
Available on these devices 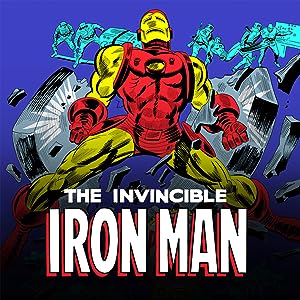 4.6 out of 5 stars
4.6 out of 5
79 global ratings
How are ratings calculated?
To calculate the overall star rating and percentage breakdown by star, we don’t use a simple average. Instead, our system considers things like how recent a review is and if the reviewer bought the item on Amazon. It also analyzes reviews to verify trustworthiness.
Top reviews

libertyship
5.0 out of 5 stars great book
Reviewed in the United States on January 18, 2021
Verified Purchase
Book was great, amazon packaging not so great. It was packed with another book, nothing to protect them, it arrived with a tear in cover. Not worth the hassle to return it as it is just to read, but they should pack more carefully.
Read more
Helpful
Report abuse

J. Reeves
2.0 out of 5 stars Not my favorite.
Reviewed in the United States on October 3, 2020
Verified Purchase
The art in a lot of these stories was pretty lackluster.
Read more
Helpful
Report abuse

Patty Palazzo
5.0 out of 5 stars Arrived in pristine condition!
Reviewed in the United States on August 23, 2020
Verified Purchase
Arrived on time in pristine condition. Very satisfied with this purchase for my wonderful son who LOVES comics ... and is pretty particular about how perfect they arrive!
Read more
Helpful
Report abuse

Obviously
3.0 out of 5 stars Great comics but a step down from the earlier collected version.
Reviewed in the United States on November 23, 2020
Len Kaminski's run on Iron Man is one of my favorite mainstream comics of the 90's and in my opinion was the best the comic had been since the Armor Wars. It starts here with the birth of War Machine as James Rhodes is once again forced to take over the role of Iron Man from a thought to be deceased Tony Stark.

What follows is a series of fun stories while Rhodes grapples with the seemingly impossible task of having to run Stark's businesses while wearing the armor he swore he'd never wear again due to how it almost ruined his life the first time around. He has to deal with both old and new foes and even the Avengers who are more than a little suspicious of this new Iron Man.

Kevin Hopgood's art is a little uneven at times but gets better as the run goes on and is much more sensible than a lot of contemporary comic art. My only real complaint about this book is that the earlier War Machine trade paperback collected up to Iron Man #291 which was a much more reasonable place to stop this arc, as it covers the return of Tony Stark and the fallout between the old friends that results from it, leading into War Machine's brief solo series. Without that bit of extra story this collection just sort of stops without giving a satisfying conclusion.
Read more
One person found this helpful
Helpful
Report abuse
See all reviews

Temple Phoenix
4.0 out of 5 stars Rhodey Round 2
Reviewed in the United Kingdom on July 9, 2020
Verified Purchase
The first time James Rhodes took on the mantle of Iron Man, it was a fun stretch of stories that inevitably ended with Tony Stark reclaiming the title and the suit. In the comics collected here (volume 17, covering material from 1992-1993), he gets another crack at the superheroing business - and this time it's set up so that he can walk away with his own armor afterwards...

First, though, we have to get through Iron Man's section of the sprawling Operation: Galactic Storm (collected here with synopses of the non-IM issues - Avengers Epic Collection 22 has the whole thing if you're interested). Following that, Tony's health is once again failing thanks to a techno-organic parasite, and soon events leave Rhodey in a new, heavily-armed suit and in charge of Stark Enterprises.

It's very much a new, shootier Iron Man for the grim 90s, but as with the previous Jim-as-IM storyline does help the comic feeling fresh; Jim is a fighter, not a scientist and so the action ramps up accordingly. Weirdly, although the War Machine name is used on several covers, Rhodey doesn't call himself by that name in any of the stories collected here. Writer Len Kaminski and artist Kevin Hopgood make a good team; nothing worldbeating but with solid work throughout, and with plenty of decent ideas.

We also get the complete Assault on Armor City crossover that ran through three of the 1992 annuals - again nothing special, but as a push for Marvel's new character Darkhawk it works fine. It adds to a volume that is perhaps not essential but contains enough good material to be welcome.

Extras consist of a four-page Marvel Age article about the title's new developments. A fine purchase for Iron Man fans, and an essential one for War Machine fans!
Read more
One person found this helpful
Report abuse