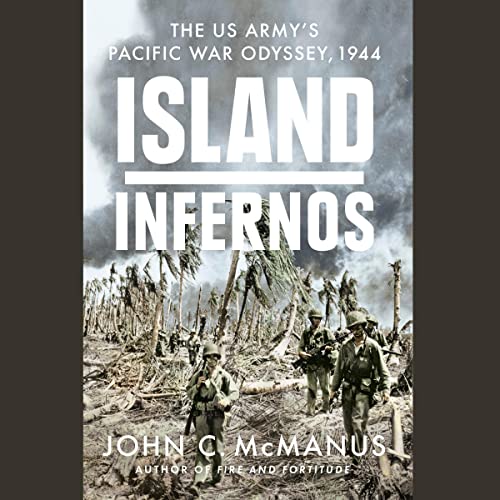 From the author of Fire and Fortitude, the continuation of the US Army's epic crusade in the Pacific War, from the battle of Saipan to the occupation of Japan.

John C. McManus' award-winning Fire and Fortitude enthralled audiences with an unforgettable and authoritative account of the US Army's evolution during the Pacific War, from the devastation of Pearl Harbor to the bloody battle for Makin Island in 1943. Now, in this second and final volume, he follows the Army as they land on Saipan, Guam, and Okinawa, climaxing with the American return to the Philippines, one of the largest, most complex operations in American history and one that would eventually account for one-third of all American casualties in the Pacific-Asia theater.

Brilliantly researched and written, the narrative moves seamlessly from the highest generals to the lowest foot soldiers and in between, capturing the true essence of this horrible conflict. It is a masterful history by one of our finest historians of World War II.

Special invitation from Audible!
Learn more about Membership
List Price: $42.00
You Save: $5.25 (13%)
By completing your purchase, you agree to Audible’s Conditions Of Use
Sold and delivered by Audible, an Amazon company
Share

4.8 out of 5 stars
4.8 out of 5
13 global ratings
How are ratings calculated?
To calculate the overall star rating and percentage breakdown by star, we don’t use a simple average. Instead, our system considers things like how recent a review is and if the reviewer bought the item on Amazon. It also analyzes reviews to verify trustworthiness.
Top reviews

William F. Daly
5.0 out of 5 stars A Story of Uncommon Valor and Sacrifice
Reviewed in the United States on November 15, 2021
Verified Purchase
Excellent description of all aspects of the Army's role in the Pacific War. I'm sorry my Dad, an Army combat engineer who fought on Guam and Leyte, didn't live to read it. He was one of the men who attacked fortified caves and bunkers with grenades and satchel charges. He would have enjoyed this book immensely. I will buy a hard-bound copy of the book for my grandchildren to read, so they will appreciate what my Dad endured for them.
Read more
7 people found this helpful
Helpful
Report abuse

HMS Warspite
TOP 500 REVIEWER
5.0 out of 5 stars Setting the record straight...
Reviewed in the United States on November 23, 2021
Verified Purchase
"Island Infernos" is the second volume of historian John McManus's hard-hitting trilogy on the U.S. Army in the Pacific during the Second World War. This volume covers the action in 1944, ranging from New Guinea to Burma to the Marshall and Mariana islands. Throughout, the author seeks to publicize the U.S. Army's vital role in the war against Japan, a role too often slighted in favor of the U.S. Marine Corps' undoubted exploits in the Pacific.

The author hits his marks equally well at the level of the private soldier fighting in a jungle hell and at the level of general officers engaging in the traditional blood sport of promotion politics. This volume is particularly noteworthy for its account of the vicious jungle fighting in New Guinea, including the amphibious strategy that bypassed Japanese strongholds and brought U.S. forces closer to the Philippines. The book includes a small selection of photographs and maps. Very highly recommended to students of the conflict.
Read more
2 people found this helpful
Helpful
Report abuse

Max
5.0 out of 5 stars Island Warfare
Reviewed in the United States on November 10, 2021
This book is very interesting and tells the story of the US Army in its campaigns in the Pacific. From the Aleutian Islands off the coast of Alaska to the Islands that are within striking distance to Japan. The story is well put together and the sequence of battles and their strategies is discussed. I was fascinated to read about the smaller Islands which the Army took that received no or little coverage by the news. I did not want to put this book down as the story it tells is one that IMO is not well known at all. Many of mu family members fought in the second world war and they are all gone now. Students of history or those who want to know the real stories behind the battles and inter agency strategy will do well to read this finely written and interesting book.
Read more
7 people found this helpful
Helpful
Report abuse
See all reviews
Back to top
Get to Know Us
Make Money with Us
Amazon Payment Products
Let Us Help You
EnglishChoose a language for shopping. United StatesChoose a country/region for shopping.
© 1996-2021, Amazon.com, Inc. or its affiliates