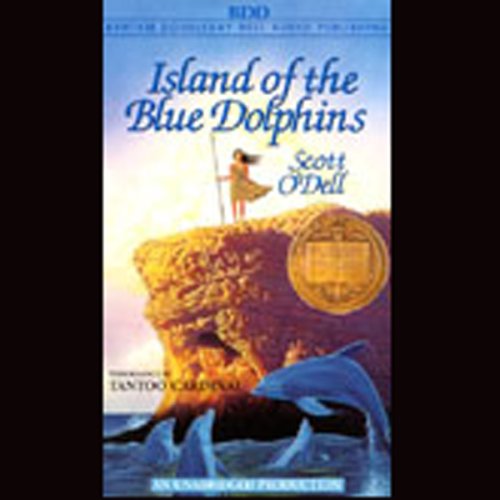 Island of the Blue Dolphins

List Price: $21.27
You Save: $6.28 (30%)
By completing your purchase, you agree to Audible’s Conditions Of Use
Sold and delivered by Audible, an Amazon company
Share

4.8 out of 5 stars
4.8 out of 5
6,114 global ratings
How are ratings calculated?
To calculate the overall star rating and percentage breakdown by star, we don’t use a simple average. Instead, our system considers things like how recent a review is and if the reviewer bought the item on Amazon. It also analyzes reviews to verify trustworthiness.

Rebecca Coomes
5.0 out of 5 stars Loved it then, love it still!
Reviewed in the United States on April 11, 2017
Verified Purchase
I read this as a child in grade school. Gobbled it up actually. I am now 53 and decided to read it again and it is still just as good as it was then. The imagery brought about by the writing is amazingly good, and you begin to feel almost a kinship with this girl. After reading it, I Googled the book and found a wealth of information about the book, the actual island, and the real story of this girl, who was a middle-aged woman by the end of the book. The island and the story of the "Lost Woman of San Nicolas" has actually been extensively studied in colleges, and archaeological expeditions have been conducted, where many artifacts were found. This book is a must read for kids, and even kids who don't like to read will likely be caught up in the story.
Read more
115 people found this helpful
Helpful
Report abuse

I really think I am the kind of strong, independent woman I am because I grew up reading books like this. I have a niece now and I've already got a list of books I want her to read when she's older. This was one of the first I added to the list.
Read more
55 people found this helpful
Helpful
Report abuse

KCLyn
5.0 out of 5 stars The book is engaging. Much can be learned from it too, regarding the injinuity and resourcefulness of one lone woman.
Reviewed in the United States on March 17, 2018
Verified Purchase
This was my favorite book as a youth. It was fun finding it and reading it again from an adult perspective. The story is engaging, well written and is loosely based on the life of a woman who actually lived alone on an island off the California coast, La Isla de San Nicolas from1835 to1853, and came to be known as The Lost Woman of San Nicolas. Little is really known about her life due to her strange language, which no one could understand. It did not bear similarity to any known languages. In the postlog of the book, O’Dell describes the woman’s life at the Santa Barbara Mission from the time that she was “rescued” to her death.
This is an excellent book for children in fourth through eighth grades. Girls will love the descriptions of the self-made clothing and jewelry that she wore. Examples of these garments and the jewelry are or were on exhibit in the Southwest Museum in Los Angeles
Read more
37 people found this helpful
Helpful
Report abuse

Melissa K
5.0 out of 5 stars Amazing book!!
Reviewed in the United States on May 20, 2018
Verified Purchase
This is the book that fueled my 4th grader to read every book she could get her hands on. Then she started writing and is absolutely amazing at it. She’s in college now. This book actually was a turning point in her life. Just ordered it for my 8.5 year old but I think she’s not ready for it yet. She’s just finishing 2nd grade and she is advanced in reading but I think not mature enough for the book. Maybe in 6 months or a year.
Read more
32 people found this helpful
Helpful
Report abuse

JoLa
5.0 out of 5 stars A story of heartbreak and survival. Beautifully written.
Reviewed in the United States on July 24, 2017
Verified Purchase
I saw this beautiful old movie on television as a kid and I never forgot it. I am so happy to discover this wonderfully written book of heartbreak and survival. I purchased this for my 13 year old granddaughter and she absolutely loves it. She explained that this book made her more aware of how blessed and fortunate she is. She cried many times throughout the story of this beautiful Native American girl and her family, but finshed with a more grateful and gracious awareness of life and courage to endure difficult times.

5.0 out of 5 stars A story of heartbreak and survival. Beautifully written.
By JoLa on July 24, 2017
I saw this beautiful old movie on television as a kid and I never forgot it. I am so happy to discover this wonderfully written book of heartbreak and survival. I purchased this for my 13 year old granddaughter and she absolutely loves it. She explained that this book made her more aware of how blessed and fortunate she is. She cried many times throughout the story of this beautiful Native American girl and her family, but finshed with a more grateful and gracious awareness of life and courage to endure difficult times.

Book is paperback and easy to read. Fast shipping.

Tess Eggleston
4.0 out of 5 stars Make Time for this Classic!
Reviewed in the United States on December 31, 2017
Verified Purchase
I can't believe that I've lived nearly half a century (gasp!) without reading this classic book. I escaped it in my childhood when many of my friends were reading it. After all, it was a classic, and I couldn't be bothered with those old tomes. I escaped it throughout the duration of my teaching career because I was too busy plowing through the latest and greatest shiny stars of the publishing world. My kids will be reading and discussing either/or ISLAND OF THE BLUE DOLPHINS and HATCHET during our January book club, and I'm thrilled to have nudged this one their way. We all need Karana in our lives.
Read more
25 people found this helpful
Helpful
Report abuse

LilButterflyVani
5.0 out of 5 stars I first read this novel in 9th grade. Although ...
Reviewed in the United States on October 21, 2017
Verified Purchase
I first read this novel in 9th grade. Although it was so long ago , but because the theme of the story was so inspiring, a true story, that I still remembered to the point I had to order this book again to read. It's now on my bookshelf as part of my book collection. The writing is simple to read and understand. Most importantly, It gives young people hope and to have courage to fight for survival under any harsh circumstances.
Read more
13 people found this helpful
Helpful
Report abuse
See all reviews

eppingstrider
4.0 out of 5 stars Many readers will imagine themselves in Karana’s footprints when they next go paddling around rock pools or exploring sea-caves
Reviewed in the United Kingdom on March 22, 2014
Verified Purchase
We find ourselves on the Island of the Blue Dolphins with Karana, her brother, family and tribe, living as a native people would. However the red sails of an Aleut ship are in sight, and knowing that this has caused trouble in the past, Karana’s father takes care in his negotiations with them for the hunting of otters in their waters. Despite his care things turn bad, and then worse. A different ship arrives, offering to take the remainder of the tribe to safety in the east, but Karana’s brother turns back to fetch something he has forgotten, and Karana leaps from a canoe, which is taking her from the island to the ship, to find him.

What follows is the tale of Karana’s life fending for herself on a deserted island. There are friendships and fights, hardships and successes. She overcomes her superstitions and her fears, and shows her resourcefulness and patience.

The tale is beautifully written, and whilst not paying too much attention to detail, I felt that there are enough hints for anyone with the misfortune to be stranded on a desert island to make the best of their opportunities. I expect these days it is read in schools with plenty of additional material for children to try their hand at crafting some of the items Karana makes, although perhaps substituting something more mundane for cormorant feathers or elephant seal tusks. I might like to try mapping the island or drawing the view of Coral Cove.

The story is based on a legend that appears to have substance, of a girl stranded on an island to the west of California, who was eventually rescued and brought to Santa Monica to live out her days. I’m not sure whether that is important, but I do know that it is an enchanting tale in the best of senses, and one that will spur many readers to imagine themselves in Karana’s footprints when they next go paddling around rock pools or exploring sea-caves by canoe.
Read more
8 people found this helpful
Report abuse

Spyro
4.0 out of 5 stars classic children's book
Reviewed in the United Kingdom on June 19, 2019
Verified Purchase
This book is a worthy winner of the Newbery award and gripped me as a child reader, especially knowing that it's based on a true story. As an adult, rereading, the story is still gripping although perhaps the writing style no longer appeals to me quite as well. I wouldn't hesitate to recommend it to my children or other young people of my acquaintance.
Read more
One person found this helpful
Report abuse

Esdien
5.0 out of 5 stars Immerse youself!
Reviewed in the United Kingdom on December 20, 2007
Verified Purchase
This is one of my favourite all-time books. I read it when young and have re-read it several times as an adult. I have also bought it for many adults/children as presents and they have all gleaned the same peasure I have from it. The fact that it is based on a true story gives it an added dimension. The fact that it is about the survival instincts, courage and tenacity of a young girl makes it a must-read for other young girls needing a positive role model in a world where most heroes in books are male.
Read more
3 people found this helpful
Report abuse

PaulGT
5.0 out of 5 stars Great read from my childhood.
Reviewed in the United Kingdom on January 6, 2018
Verified Purchase
I read this book as a young child and it has always remained a favourite. Was pleased to find it for the kindle so I could enjoy the story all over again.
Read more
One person found this helpful
Report abuse

JBS
5.0 out of 5 stars A childhood favourite.
Reviewed in the United Kingdom on July 18, 2014
Verified Purchase
This is a book I read when I was a child. Talking to a work colleague, I remembered it and was so pleased to find it still available and on the kindle. I loved reading it again as much now as when I first read it when I was nine or ten years old. I found the story fascinating then as now. A simple tale based on a true story.
Read more
One person found this helpful
Report abuse
See all reviews
Back to top
Get to Know Us
Make Money with Us
Amazon Payment Products
Let Us Help You
EnglishChoose a language for shopping. United StatesChoose a country/region for shopping.
© 1996-2021, Amazon.com, Inc. or its affiliates