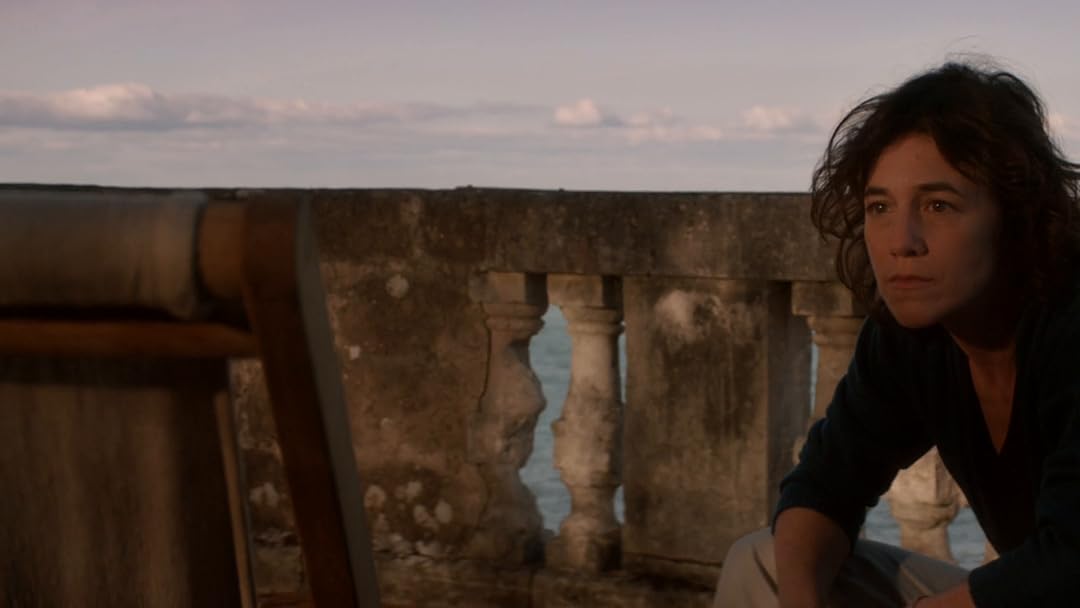 (37)
5.52 h 14 min2018R
Twenty-one years ago, she ran away. And twenty-one years later, Carlotta (Marion Cotillard) is back from the void. But Ismael (Mathieu Amalric) has been busy rebuilding his life with Sylvia (Charlotte Gainsbourg) and working on his next feature film.

Leaves Prime in 27 hoursRentals include 30 days to start watching this video and 48 hours to finish once started.

septimusReviewed in the United States on January 31, 2021
2.0 out of 5 stars
Charlotte Gainsbourg tries to brighten Desplechin's limited imagination
Verified purchase
Charlotte Gainsbourg is always so compelling to watch. There is so much going on between her eyes; she seems an eternal teenager fixated on an idea. She is one of those French actresses who will never grow old. Here she plays an astrophysicist and makes the role more interesting that it deserves to be. Marion Cotillard seems to sleep walk through her films (with a couple of exceptions). She is more alive in this film than usual, but their love-triangle with Amalric is a no-contest; why would anyone not choose Gainsbourg? I'm really not sure why Cotillard is held is such high regard; there are so many French actresses who are more interesting. Similarly, Arnaud Desplechin is inexplicably anointed a top-shelf French auteur (alongside the equally undeserving Olivier Assayas). He has such a limited set of ideas/obsessions, and is so indulgent about turning his own life into movies he was famously sued by his ex-companion. Here Cotillard is yet another of his neurotic, somewhat air-headed sirens, there are elements of spy-craft and movie (or theater) within a film, and he reuses iris shots borrowed from Truffaut -- haven't we seen all that before? The unheralded Jerome Bonnell, who grew up in the Calais area like Desplechin, creates so many more memorable characters because he doesn't do as much navel gazing. Maybe it is time the art-house critics stop bend over backward to heap praise on Desplechin's incomprehensible films.

Jeremy J ClarkReviewed in the United States on August 18, 2018
4.0 out of 5 stars
Mathieu Amalric, Marion Cotillard, and Charlotte Gainsbourg are a delightful love-triangle
Verified purchase
Mathieu Amalric is delightfully zany in this complicated romantic comedy/drama. The luminous Charlotte Gainsbourg and the entrancingly alluring Marion Cotillard (you’ll understand what I’m referring if you see the film) are both excellent as the two love interests that Ismael must ultimately choose between.
One person found this helpful

Gloria B. SalasReviewed in the United States on November 4, 2018
3.0 out of 5 stars
Expected more
Verified purchase
Slow movie for good actors
One person found this helpful

Amazon CustomerReviewed in the United States on January 24, 2021
1.0 out of 5 stars
T
Verified purchase
Too

Harry H LongReviewed in the United States on September 6, 2018
4.0 out of 5 stars
JIGSAW PUZZLE FILM
There are some films that work more on what you bring to them than what they hand to you on a silver platter. They are puzzle films that are meant for you to figure out – or at least to make your own interpretation of them. While watching Arnaud Desplechin’s film I was somehow put in mind of Stanley Kubrick’s final production, “Eyes Wide Shut,” even though the two resemble each other only in that you have to be attentive to tiny clues to sort things out. At its beginning the film seems to be about a diplomat and possible spy who’s gone missing but the main emphasis soon shifts to the titular filmmaker Ismael Vuillard (Mathieu Amalric) whose wife, Carlotta (Marion Cotillard) has also gone missing, though 20 years ago. After a long spell of sleeping with his actresses he has begun what is becoming a very serious relationship with astrophysicist Sylvia (the always luminous Charlotte Gainsbourg) when Carlotta abruptly reappears with the intention of picking up her marriage where she left it off. One part of Ismael is against the notion – and furious at his wife for her never fully explained absence (during which she even married another man) while another part of him is still in love with her. Making this triangle something of a quadrangle is Carlotta’s father, Henri Bloom (László Szabó), a filmmaker who has been Ismael’s mentor; his daughter’s reappearance will kill him to Ismael’s thinking.
But then, about halfway through, the film fragments and goes in multiple directions. It becomes apparent that some of what we’ve been seeing is either from the film Ismael is working on or scenes that he’s trying to work out. He’s so blocked he abandons the production and hides out in his late aunt’s house. The film’s protagonist is now yet another who’s among the missing (added to that list is his brother whom he insists is dead yet is anything but). If the film’s theme – if not its content – isn’t clear enough from the action it is made implicit during Bloom’s speech to a film festival that becomes voice-over to a montage of tombstones. Equally missing is what’s left to be shot of Ismael’s film and he, desperately exhausted – no doubt by the drama in his life for starters – embarks on a wild explanation to his producer how the existing footage can be tied together by one of the characters breaking the fourth wall and tying things up with a monologue. And that happens to be exactly how Desplechin ends his film! I’m not certain how much, if any, of this is to be taken realistically – and I’ve read that the director cross-references his films with each other, so those familiar with his other works may get more out of the current production than those who aren’t (including me). I expect repeat viewing will be necessary to appreciate fully what is a rich and rewarding film.
One person found this helpful

JenniferReviewed in the United States on October 8, 2018
4.0 out of 5 stars
Good, but I wish it were better
Spoilers:

Ismael Vuillard (also the name of the somewhat insane character played by Amalric in Arnaud Desplechin's Kings and Queen) is a filmmaker who has two ghosts: his wife, Carlotta, who had been missing for two decades, and his brother Ivan Dedalus. Dedalus doubles as the main character in the film-within-the film being written by Ismael (adding a layer: Paul Dedalus is the beloved character played by Amalric in three of Desplechin's films).

Within minutes we see precisely what's going to happen, then it takes two and half hours to play out. Ivan, played by the sorely under-utilized and brilliant Louis Garrel, is the more mysterious ghost in a plot line that takes longer to unravel, but this might be simply because his character simply isn't as fleshed out as Carlotta's.

So, by the by, Carlotta comes back, which is what the film is all about. Ismael has been in a relationship with Sylvia (Charlotte Gainsbourg) for two years, and this naturally creates a problem. Aside here: there is more chemistry between Cotillard and Gainsbourg than there is between Mathieu Amalric and either of them.

Amalric is characteristically disheveled, which is to say it appears he didn't bathe once while filming. He wears the same dirty pink/orange pants throughout, his hair is greasy, and his face unshaven. Now that he's in his 50s and not the charismatic s*x-pot he once was, he just looks dirty. It's difficult to see why the brilliant astronomer, Sylvia, is attracted to this character who is an emotional and physical mess. The women are clean and lovely. He not only sleeps with these two, but another woman as well, and references sleeping with many actresses in his films.

The plot line that involves Ivan is weak, weak, weak. Here we've got his *other* ghost, and he's relegated to...the cutting room floor, I suppose. By the end we find out how this parting of ways occurred, but the exploration into Ivan's character is non-existent.

There are some excellent performances by other supporting actors, and while I hate to say it because I am such a fan, Mathieu Amalric is the weak link. He sleepwalks through this performance, like ho hum I'm playing another loony character for Desplechin. Given their long history of mentor / protege --> equals, this is a major bummer.

Overall, I see why this wasn't a well-received film, but I'm personally invested enough in this director and these characters to be tickled by it. I like the intricacy of the plot, though it was too flawed to make this film as excellent as Desplechin's others.

The same material, with this filmmaker and these actors, should have been better – it really is a good story! People leave, we're haunted, and they return as ghosts. In the meantime we go a bit mad. Only an aging Desplechin and Amalric would have this perspective, and I'm going to stick around for the inevitable peace that follows this stage in life, which I assume we'll see in a future film.

Amazon CustomerReviewed in the United States on February 18, 2021
1.0 out of 5 stars
Wanted to enjoy...but didn't
Tried to stick it out, but it went nowhere. Truly tough to chew and enjoy. Love my foreign films, this one, not so much.
See all reviews
Back to top
Get to Know Us
Make Money with Us
Amazon Payment Products
Let Us Help You
EnglishChoose a language for shopping. United StatesChoose a country/region for shopping.
© 1996-2022, Amazon.com, Inc. or its affiliates