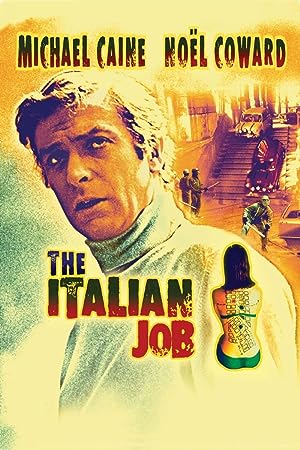 joel wingReviewed in the United States on May 24, 2020
4.0 out of 5 stars
Comedy heist flick with plenty of 60s swag
Verified purchase
The Italian Job was a unique film. Released in 1969 it was a mix of a crime heist story, a comedy, and 60s swag starring Michael Caine as the criminal mastermind Charlie Croker. With the backing of British crime lord Mr. Bridger (Noel Coward) Croker organizes a large group of criminals to rob $4 million of gold in Turin, Italy. His friend planned the job but was killed by the mafia for doing so. Croker decides to complete it.

Croker embodies the swag. He gets out of prison and gets a brand new wardrobe of the latest suits. He’s got a convertible sports car and more women then he knows what to do with. He was a playboy criminal.

The heist was a work of genius. It involved taking out Turin’s security camera system so they thieves are not seen, then sabotaging the traffic light system to tie up a convoy carrying the gold, and then making a getaway through the Alps to Switzerland. The escape would become iconic as it used Mini Coopers. Added bonus there were plenty of car stunts with the Minis.

The jokes are everywhere. Croker for example breaks into prison to talk to Mr. Bridger while he goes the bathroom to try to get his backing for the heist. Benny Hill plays Professor Simon Peach who is part of Croker’s team. He plays a lecher who has a thing for big women.

The 1960 Ocean’s Eleven had a similar idea of a big team carrying out a smart heist, but the Italian Job was far more ambitious and more of a comedy.

Mr. M.Reviewed in the United States on July 9, 2022
5.0 out of 5 stars
A classic for no reason but an enjoyable watch nonetheless
Verified purchase
The car scenes have inspired guys my age for half our lives.

The Tally HoReviewed in the United States on July 27, 2021
4.0 out of 5 stars
Review without Spoilers - Pro & Cons
Verified purchase
The Italian Job (1969) is a British comedy caper film, written by Troy Kennedy Martin, & directed by Peter Collinson. It tells the story of Charlie Croker (Michael Caine), the leader of a cockney criminal gang released from prison with the intention of doing a "big job" in Italy. This film is a true cliffhanger & is way better the 2003 remake (1 star). Here are the pros & cons as I see it, I hope this helps you.

Pros:
1. Fun & lively & I am not even an action film fan
2. Good soundtrack
3. Pretty good cinematography for the time
4. Some nice & beautiful classic cards
5. Acting is good overall
6. If you like British 60's genre films, then this is a treat
Cons:
1. Although this is overall a fun film it would not inspire to me to watch it again
2. It is a shame they destroyed some beautiful cars just for the effect

C. C. BlackReviewed in the United States on December 4, 2020
4.0 out of 5 stars
A Mixed Bag, But Let's Not Overthink It
Verified purchase
Here's my tote:

5 points for Michael Caine, playing the young "Michael Caine."
0 points for most of his supporting players, given no personalities and little to do, with the exception of
5 points for Noël Coward, in his last movie role, while subtracting
5 points for his needless toupee.
0 points for the first hour's pacing, in which we learn next to nothing about the gang's members and their plans.
5 points for the second hour, well directed and edited, featuring spectacular feats of human skill behind automobiles' steering wheels. No CGI foolery; genuine danger—so much so that top stunt drivers walked away from a particular rooftop leap across a chasm.
3 points for shrewd Fiat product placement, while a fleet of Union Jack Minis did most of the work.
0 points for a script that makes no logical sense, with
5 points for willing our suspension of belief, while giving Mr. Caine
5 points for each of two of the most memorable lines in British comedy—including the movie's closer.
4 points for Quincy Jones's wide-ranging, humorous score.
4 points for one of cinema's great closing images.
10 points for the movie's inspiring annual children's charities, which since 1990 has raised £3,000,000.00 and counting.

Let's give this one a 4/5. The second hour is one great romp: cheerful, Mack Sennett escapism in a time when we need it.

Elvin OrtizReviewed in the United States on November 1, 2020
5.0 out of 5 stars
Delicious and Delightful
Verified purchase
Fun from beginning to end. The English Underworld against the Italian mafia as Charlie Crocker (played by Michael Caine), recently released from prison, now plans a big kill in Italy with the financial backing of crime lord, and true boss of the prison where he lives, Mr. Bridger (played by Noel Coward). The film probably belongs to that antihero genre where crooks play against crooks, like Ocean Eleven or The Sting. Nevertheless, the Italian Job is a superb film on its own merits. I loved Caine’s Crocker, a James Bond type playing for the bad guys, never missing a chance with women, and keeping his cool even while watching two of his sports car being smashed and thrown off cliffs under orders of his Italian counterpart. Noël Coward plays against type here, enjoying every bit of it, including a final scene where he’s about to taste a banquet to celebrate his success.

Other than these delightful characters, the planning and execution of that plan, this film also has my favorite car-chasing scene. And the conclusion to the film, not only is a surprise, but it is also deliciously funny and outrageously hilarious, keeping up with the spirit of the film until its last second.

The direction is perfect, producing a film that moves with speed enough to compete with the getaway cars in the car-chasing scene; and the soundtrack by Quincy Jones effectively contributes to the humor and action in this film. Watching some of the gang move to the rhythm of the soundtrack as they replace tapes that will jam the traffic the next day is delightfully funny. All in all, this film is perfectly enjoyable.
One person found this helpful

RobReviewed in the United States on August 10, 2015
5.0 out of 5 stars
This is the One to Get
Verified purchase
Let's start at the beginning, 1969-small downtown theatre, Texas. The marquee reads "The Italian Job" and Michael Caine. And that was virtually all the promotion this film got. The producers on the bluray talk of the failure of the movie in the USA and it was no wonder with how it was just dumped into theaters with no aplomb. Lucky for me the theatre included Michael Caine in the title because at 14, I thought he was the coolest dude in cinema at the time (I felt blessed by the gods that I had wavy hair like him). I still remember clearly the sign and the serendipity of seeing two new Jaguar XKEs parked out front presumably owned by the fighter pilots from the nearby AFB. Seeing The Italian Job then and there made it one of my favorite movies of all time. This was a zeitgeist experience. If you are not of those times, then the movie may be enjoyable, but its magic is just a mystery to you. I mention all this because most reviewers of older movies don't capture that first love experience that original fans have. I can appreciate Gable, Cooper, and Flynn, but not on the level of a 1930's or '40's filmgoer. So that makes the extras on the bluray so enjoyable as fortunately, most of the participants were still around in 2009. And despite what the Amazon description says, my US bluray Has been playing all the features. It was good to see that such a major Hollywood player as Robert Evans was a big supporter of Italian Job and is still fan enough to contribute his interview.
I don't need to go into plot, critiquing, etc. Because that is well covered ground. In closing, this is a must have for those who love this movie. For a lonnng time it was unavailable, and then came out on EXTENDED play video tape (the cheapest format in VHS-thank God those days
are over). Then the DVD (just had to make sure I was ordering the real Italian Job and not that new crap-name stealer) came out. If they can
ever convert it to 3D, I'd buy that. But the truth is soon no one will be around that grew up with this movie and the zeitgeist, like the morning mist will have vanished and no one will put up the money to polish up this gem and put it on display. So buy it now while you can.
One person found this helpful

J. LeeReviewed in the United States on July 24, 2002
5.0 out of 5 stars
Still good after all these years
Verified purchase
The Caper genre has been around for a long time but isn't seen all that much these days or, in my mind, done as well. The latest, of course, was the REMAKE of "Ocean's Eleven" and the REMAKE of "The Thomas Crown Affair", both not as well done as the originals. And, then, there is the remake of "The Italian Job".

However, for what it is, this original version is still a very fun film and is definately one of the all-time Car Buff favorites because of the Minis and, unlike some, Car Buffs enjoy ALL the Mini scenes, especially the practice sessions (much more fun than the remake's). The ending theme song is still hugely popular with British car lovers.

By today's standards the original "The Italian Job" may seem lame to the younger crowd since there are no hotshot special effects...or loads of dead bodies. And English humor is, well, different than Americans'. On the other hand, all the car stunts are real and fun and the cast does not take themselves too seriously. The movie isn't as slick as the new version with Mark W., but I still like it more. It is a very 60s movie.

For one thing, there is more to the getaway than the remake. However, just like the remake, the crew is stealing money from the Mafia, but, unlike the remake, the ending isn't as tidy and happy for the robbers. Funny as can be, but not exactly happy. It's a real cliff hanger.

This movie is also timely right now since BMW has introduced the new retro designed Rover MINI to the U.S. market. And, as a matter of information, used/restored "old" Minis are still being imported to the U. S. in decent numbers by private individuals. I've heard that there are an estimated 10,000 classic Minis still in the U.S. I belong to a Mini club in Texas with well over 100 members. Many, like myself, own more than one and many also own the new BMW MINI.

The only odd aspect about this movie is why it took so long to finally be offered on tape and then, after a couple of years, get down to such a great price since Michael Caine starred in it. I can remember waiting and waiting for this movie to be released on VHS. Something along the lines of the wait for "LeMans". And, then, it wasn't cheap. The new DVD is much better quality of course and well worth the money. The DVD's extras are good, too.
One person found this helpful

BrianReviewed in the United States on May 9, 2022
5.0 out of 5 stars
cool
Verified purchase
some what of a good movie fiats are cool
See all reviews
Back to top
Get to Know Us
Make Money with Us
Amazon Payment Products
Let Us Help You
EnglishChoose a language for shopping. United StatesChoose a country/region for shopping.
© 1996-2022, Amazon.com, Inc. or its affiliates