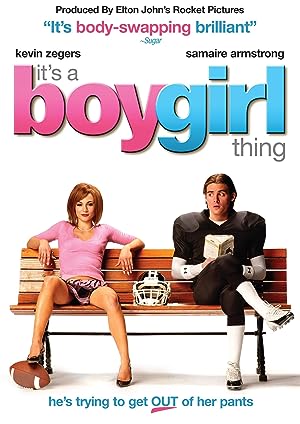 It's A Boy Girl Thing

There's a little more depth to the script than one would imagine, and it's surprisingly well done for what it is. Definitely worth a watch if you're okay with the genre.

HoytReviewed in the United States on April 22, 2018
1.0 out of 5 stars
Anchor Bay release is edited and censored.
Verified purchase
The charm of this film was the balance between crude humor and sweetness. It never should have been rated PG 13. It's an R film. That is before the butchering job done by Anchor Bay. This cut censored some of the nudity and foul language, while other such scenes were intact. In general I found this version wimpy.
8 people found this helpful

LJPReviewed in the United States on December 30, 2018
1.0 out of 5 stars
NOT PG-13! Should be Rated R!!!!
Verified purchase
Watched this with my 13-year-old based on the PG-13 rating. Oh. My. Gosh. How horrible! This should be an “R” rated movie. At least. Shows erections through boxers, full frontal female nudity, male rear nudity, and TONS of overt, crude sexual references. BEWARE!
6 people found this helpful

Miss EmReviewed in the United States on March 26, 2019
5.0 out of 5 stars
An Amusing Tale of Empathy (Possible Spoilers)
Verified purchase
Aa many reviewers mentioned, this movie probably should have been rated R. Full frontal nudity and the f-bomb dropped a few times. Personally, this took nothing away from the movie for me.

Nell and Woody are from opposite ends of the social hierarchy of high school and live very different lives economically even though they are next door neighbors. These actors played the switched roles with perfection. Each learning what it's like to be the other and what they have to deal with every day. It was funny, sad, and insightful. They broke down the typical stereotypes associated with these characters and created something worthwhile to watch. Don't miss out!

MikeOMReviewed in the United States on April 10, 2020
1.0 out of 5 stars
This film has been censored
Verified purchase
This is outrageous, the film has been victim of censorship (either by Amazon or Starz); at keast four scenes have been removed from the original version since I bought it.
I would have thoght that once you bought a film your version should remain virgin without tampering.
One person found this helpful

IzzyReviewed in the United States on June 29, 2017
5.0 out of 5 stars
Underrated teen film: GEM
Verified purchase
One of the most underrated teen films.
The actors don't use gender stereotypes, but rather base their acting on the other's performance at the start of the film.
Incredible as the teen flick genre goes.
Funny and witty and corny with a touch of adult humor but mostly excellent acting.
6 people found this helpful

Kevin TipaReviewed in the United States on October 21, 2010
4.0 out of 5 stars
Nothing unexpected, except how much fun it is.
Verified purchase
Yes, it's a body swap story. It's been done before. I had this one in my queue because I'm a fan of Samaire Armstrong. I didn't expect to like the movie. But I definitely did. The characters are well enough done that I actually cared what happened to them. There's not a lot more to say. If you're looking for a fun movie with engaging characters and story that are brought to life by actors that did a great job... give "It's a Boy Girl Thing" a shot.

One more quick thing I almost forgot. I ordered it from Amazon right after I finished watching the movie. I like it enough that I want it in my collection.
2 people found this helpful

♡♡♡Reviewed in the United States on March 31, 2021
5.0 out of 5 stars
Hilarious!
Verified purchase
This movie was so much fun to watch! Laughed throughout and the storyline keeps you invested! You get a few life lessons from it too!

Love a good body swap movie!
One person found this helpful
See all reviews
Back to top
Get to Know Us
Make Money with Us
Amazon Payment Products
Let Us Help You
EnglishChoose a language for shopping. United StatesChoose a country/region for shopping.
© 1996-2022, Amazon.com, Inc. or its affiliates